'There was shock, tears, then anger' 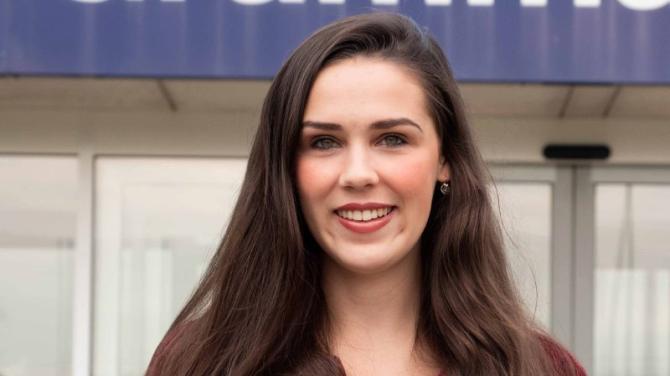 INCREDIBLE as it may seem, the Head Girl of Antrim Grammar School was left without a university place following the publication of the A-Level results on Thursday.

COVID-19 drove a wrecking ball through the academic year when schools were ordered to close back in March. The summer exams were cancelled too, which posed serious questions for the Class of 2020.

And they were answered this week when the grades finally arrived. Deprived of the chance to prove themselves in the exam hall, the future for thousands of young students was coldly decided by a computer algorithm.

Many hit their targets and are planning the next stage of their educational journey at university. Others, through absolutely no fault of their own, did not and were effectively left in limbo.

The hastily cobbled together examination system has certainly failed people like Elise McFarland. She has always been an excellent student and was looking forward to pursuing her dream of studying Medicine in Glasgow.

The course requires three As, but both Elise and her teachers knew this text book example of a straight A student could make the grade.

But her plans were left in disarray this week when she checked her results. Yes, there were As in Chemistry and Biology, but she had been given a B in Mathematics.

Excellent results by any standard, but that B was curious - given that Elise had earned an A* at GCSE in the same subject.

She also got an A at AS Level and another in her ‘mock’ exams earlier this year. With her teacher predicting another A in her final exams, the result seemed to be a foregone conclusion.

And while she dutifully smiled outside the school on results day - inside she was ‘absolutely devastated’.

“I was shocked. I really didn’t believe what I was looking at,” she said.

“It felt that all the hard work I had put in was being taken away from me. I would have to re-sit, but that would put my course back a year.

“There was shock, there were tears and then there was anger.”

And she was not alone. Her proud mum Lisa refused to accept that the result was one of many ‘anomalies’ thrown up by a piece of computer software.

“My daughter is not an anomaly. She’s phenomenal,” she said.

“She’s never had a B in her life, but they pulled this one out of nowhere. It really beggars belief. It’s all so horribly unfair.”

It was immediately decided to appeal the result, but that process could take up to 42 days - potentially after the course begins, if indeed the university agreed to hold a place for her.

Just before going to press on Monday evening Education Minister Peter Weir finally bowed to pressure and agreed that A-Level students would be granted their predicted grade if it was higher than the mark they received.

Elise, it seems, will be going to university after all.