At home with Lord O'Neill 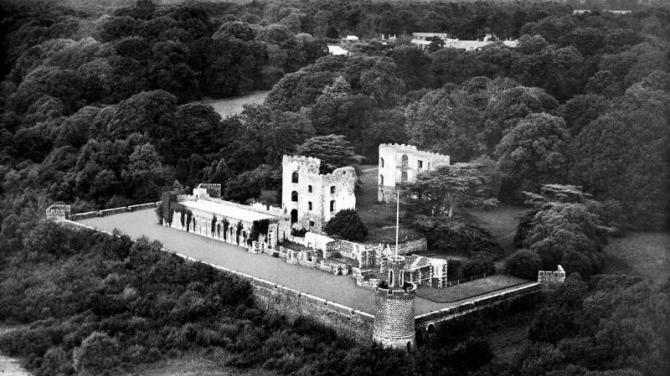 WITH over 80 years of memories to share, it’s hard to know where to start when telling the story of Lord O’Neill of Shane’s Castle.

Born in 1933 in London, the young Raymond O’Neill was moved out to rural Berkshire during the war.

“We didn’t go to school, we had a Governess. There were half a dozen of us,” he said.

When older he attended Ludgrove School and then went to Eton.

From there, he had four years in France, learning the language.

His wife, the late Lady Georgina, he says, spoke much better French after going to school in Switzerland.

In 1952 he joined the army, and went into the 11th Hussars in honour of the father of his great friend and contemporary, Lord Dunleath of Ballywalter.

He spent time in both England and Germany, before returning home to Shane’s Castle in the mid 1950s.

The original castle had burned to the ground accidentally in 1816 and the second, built by his great-great grandfather, was torched by the IRA in 1922.

“They (the IRA) were rather more polite in those days,” he said.

“My great-great grandfather was in a wheelchair and they gave everyone a reasonable amount of time to get out.”

At the time, his great uncle, Sir Hugh O’Neill, was the target, being the first speaker at Stormont.

“The house then had ecclesiastical overtones, being designed by an ordained minister of the Church of Ireland,” Lord O’Neill explains.

“The main room was said to be more akin to a chapel, very long and high with two log fires and an organ.

“Some of the organ music written by Reverend William O’Neill is still used in Drummaul Parish in Randalstown.

“When I first came here I lived ‘over the yard’ above the stables until the new house was built in the late 1950s.

“There was no room. There were plenty of cottages dotted here and there but no room for all the family relics.”

The estate was requisitioned by the army during the war and some of it was used as an armaments depot.

“There were tin huts all round the forest.

“When I came they had handed half of it back and it was split in two with a wire fence and one had to sign in at the gate. They [the army] didn’t leave until 1955.”

Lord O’Neill joined the North Irish Horse, part of the Territorial Army, in memory of his father, who had been killed in action during the war, and also attended the Royal Agricultural College and did a stint in the City of London, lodging in a family mews house near Harrods as he learned how to manage finances.

Following the death of his father, Lord O’Neill’s mother Ann married first Lord Rothermere, whose family owned the Daily Mail, and then Ian Fleming, a British Naval Intelligence officer who later became famous as the author of the James Bond novels.

Fleming had purchased a 20-acre plot in Oracabessa, Jamaica, which became known as Goldeneye.

“I loved it out there,” Lord O’Neill said.

“It was still part of the British Empire and there were governors with cocked hats wandering around.

“It was right on the edge of the sea and you could see the fish swimming around.

“I became fascinated by the underwater world, I loved snorkelling, there was no plastic in the oceans back then.

“Diving was a different matter, you can’t do that on your own or you will get into trouble!”

Lord O’Neill admits that Fleming didn’t quite know what to do with his stepson, and whilst whiling away the hours on the island, he became pals with society figure Blanche Blackwell, part of the old Jamaican establishment, who he describes as ‘a great friend’.

She was descended from the Lindo family of Jewish immigrants who had made their fortune from rum and sugar in the 19th Century and was mother of Chris Blackwell, who went on to found Island Records and went into the hospitality business.

His father was Joe Blackwell from Waterford, a captain in the Irish Guards and heir to the Crosse & Blackwell foods fortune.

Ironically, Chris has now turned Goldeneye into a luxury hotel as well as turning around the fortunes of a series of hotels along Miami Beach.

The Blackwell family also sold land to Noel Coward who built his own villa nearby.

Blanche passed away in 2017 at the ripe old age of 104 and a photo of her, surrounded by colourful parrots, takes pride of place in Lord O’Neill’s living room.

“Goldeneye wasn’t luxurious at all in those days,” he recalled.

“There was no more than a net over the window to stop the bugs from coming in, it was just a place for Ian to write his books.

“Noel Coward’s place was a much more comfortable home.”

Another friend was the artist Lucian Freud, who painted Lord O’Neill’s mother.

“It was so odd, a tiny little place, full of banks, the Rolls Royces would turn up at the end of the day to take people home and drive all of five miles to the outskirts.”

Lord O’Neill’s mother Ann and Ian Fleming only had one son, Caspar, who met a tragic end.

“Caspar was fascinated by Egyptology and went to read it at Oxford - there must only have been three in his class.

“He loved to come to Shane’s Castle and go digging for artefacts and he adored the Antrim Hills.

“However he got himself in with a bad crowd and he was addicted to drugs.

“He took sleeping tablets and then he needed ‘uppers’ to wake himself back up again.

Lord O’Neill says that he has tried to stay out of politics.

His uncle Terence was a one-time leader of the Official Unionist Party who became the fourth Prime Minister of Northern Ireland.

Terence O’Neill was known for his moderate and conciliatory approach, which angered some of his rivals.

“When I saw Paisley shouting ‘O’Neill must go’, I decided to join the Alliance Party,” said Lord O’Neill.

“I have never been active but I have always been a firm supporter.”

He has also been involved with the Ulster Countryside Committee, the Ulster Architectural Heritage Society and the Northern Ireland Tourist Board.

“When I first became involved, no-one wanted to come here,” he recalls.

“Northern Ireland was in turmoil, there were bombs going off and daily shootings, it was certainly a hard sell.”

He was also on the board of the National Trust in Northern Ireland and is still involved in regimental associations.

A former Lord Lieutenant of County Antrim (he was succeeded by Joan Christie), Lord O’Neill was tasked with welcoming dignitaries to Northern Ireland.

Avowed anti-royalist Mo Mowlam ‘pretended I wasn’t there’, he remembers, adding that he enjoyed long chats about his beloved jazz music with former US president Bill Clinton.

“We exchanged stories about Presentation Hall in New Orleans. He, like I, was a big jazz fan,” Lord O’Neill said.

“On that first visit to Belfast City Hall, he was supposed to play the saxophone, but he ran out of time, it never happened.

“In fact I kept him so long on the tarmac after he landed, it was probably my fault!”

Not surprisingly, perhaps his greatest passion is for steam.

Shane’s Castle hosts the annual May Day Steam Rally and also had its own railway in the not-too-distant past.

Lord O’Neill is an avid collector of rail memorabilia and has had a number of paintings of his favourite trains commissioned by top artists.

One depicts the Lord in his racing Mercedes, one of only a handful ever made, with a train chugging alongside.

The car itself was later sold to a collector for an eye-watering sum - Lord O’Neill had bought it for £1,000.

In his office hangs a painting of the former railway at the castle, which closed to the public in 1994, and one of his favourite engines, Quo Vadis.

The Showman's road locomotive was built in 1922 by Burrells in Thetford Norfolk and was later sold to Dorset and was even shipped to New Zealand for an exhibition.

Two of the trains which used to ferry visitors around the grounds of Shane’s Castle were sold to the ill-fated Causeway rail project and are now lying in storage.

Lord O’Neill admits he would like to buy them back one day, but is pleased that the station is still being used for corporate meetings and private functions.

Other engines and carriages have gone off to museums and heritage railways around the UK and Ireland.

Shane’s Castle is still very much a working estate and has hosted such diverse events as scout jamborees to the dance event Planet Love.

The Game Fair and Antrim Show are also annual fixtures, along with the religious event ‘Open Skies’.

And of course, the smash hit HBO series Game of Thrones has also used the grounds of the old castle as a film location - although Lord O’Neill says he has no interesting celebrity gossip to share - preferring to ‘leave them all to it’.

Eldest son Shane attended Cirencester College and takes charge of the day to day running of the 3,500 acres, 2,000 of which lie inside the estate walls.

This includes 800 acres of farmland ‘and quite a lot of bog’, as well as some trees thought to be over 200 years old.

Some were damaged in the storms in 2018, which Lord O’Neill says is ‘really rather sad - some were totally uprooted’.

Other features include two bridges and the ‘big gate’ at Randalstown, which Lord O’Neill describes as ‘the most impressive entrance in Northern Ireland’.

He takes a keen interest in his family history and gets tipped off by Christie’s and Sotheby’s auction houses if ‘something of interest’ is coming on the market.

His house in the grounds of the castle is full of paintings, drawings and etchings of the old castle as it looked in the glory days, which he has either collected or had commissioned.

Copies of more illustrious pieces are kept, with the originals loaned out to top galleries.

Lord O’Neill is especially fascinated by the story of Laura Bell, who lived in a cottage on Ram’s Island, which is also part of the estate and is now leased to the River Bann and Lough Neagh Association Company.

Miss Laura Eliza Jane Seymour Bell from Glenavy was a ‘very good looking lady of ill repute’ who entertained her guests for a short time at the cottage, and drew the ire of local people living on the shoreline because of her very noisy parties.

In the 1860s, Laura experienced a religious conversion and became an established woman evangelist, preaching in public and holding evangelical tea parties at her home.

The cottage burned to the ground after a particularly raucous party held by American and Canadian airmen stationed at Langford Lodge.

“I’m afraid when you have a cottage on an island, you have to have someone living in it or it will fall into disrepair,” said Lord O’Neill.

Also hanging on the walls of his home are the plans of a ‘cottage orne’ once owned by the family on the shores of Lough Beg.

Reverend William Chichester became an heir after two of the O’Neill brothers died without having children and changed his name to O’Neill.

“By the time he visited the cottage, word was that it had become a brothel, frequented by the great and the good of the day.

“He was said to have been so appalled that he ordered it be burned down.