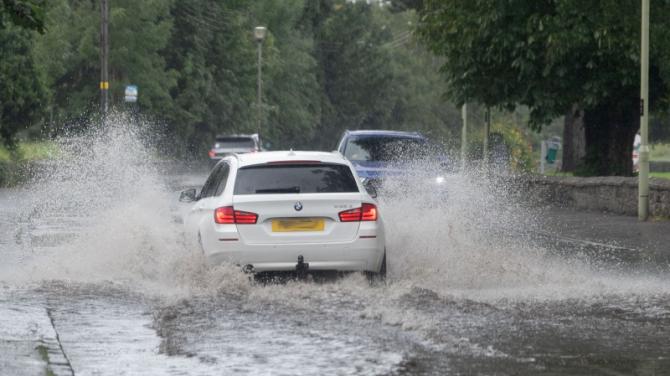 THE emergency services were on stand by on Sunday as Antrim was lashed with a downpour ‘of Biblical proportions’.

With the ground already sodden after unusually heavy downfalls earlier in the weekend, when the skies opened on Sunday afternoon it spilled out onto the roads.

Guardian photographer Dave Pettard was on the scene at the Belfast Road near Ballycraigy as cars tried to plough on through several inches of water.

And that water would inevitably find its way into the Sixmile - a river that already broken its bands several times in recent years bringing misery to residents on the Dublin Road and Riverside.

There were anxious for residents at Abbeyview and Race View on Sunday as the water started to rapidly rise.

But it could have been much worse.

Further upstream at Dunadry, the situation was becoming very dangerous.

Antrim and District Angling Association were monitoring the floods and they took the unusual step of issuing an ‘urgent notice’ to its members.

“We are advising all anglers to stay away from all weirs due to significant water levels,” said a spokesman.

“The weir at the BMC at Dunadry now poses a serious risk to the banks downstream as it is showing significant signs that it is in danger of collapse.

“Given the amount of water held in the BMC pool it could cause a surge if it breaks. Stay safe.”

Thankfully Monday brought a marked improvement to the weather, with long sunny spells.

The threat had subsided - but long-term, the threat remains.