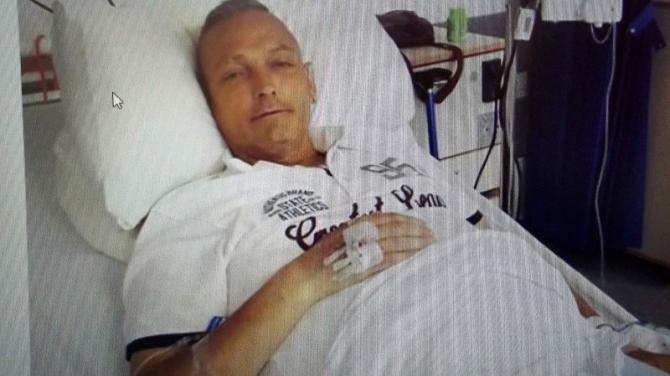 BACK in 2017 Antrim man Mark Smyth knew that without a liver transplant he was a dead man walking - but he also knew that his family and friends were marching by his side.

Doctors had warned that he had at best 20 months to live if he did not receive a transplant. The father-of-four knew that time was not on his side.

Faced with that dreadful deadline many would have thrown in the towel, but in that extraordinary Antrim Guardian interview Mark insisted that he had no intention of leaving his loving family any time soon.

“The way I see it I have two options - I fight or I die,” he explained.

“It’s like fighting a war. You have to know your enemy. To understand it.

“I look at this like a boxing match. If you can face it, you can fight it. Bring it on.”

Mark was equally honest about how he had found himself in this position in the first place. He knew he played a key role in his own downfall - albeit inadvertently.

He freely admitted that he had been a heavy drinker, regularly draining 15 cans of lager a night without giving it a thought.

But behind every alcoholic is a story - and Mark’s was particularly harrowing.

Through no fault of his own or his family he suffered a disturbing childhood trauma that cast a long shadow over the rest of his life. Even now, three decades on, it remains too intensely personal to share publicly. But it’s there nonetheless.

He suffered from depression and anxiety and was eventually prescribed heavy duty medication to combat the symptoms. Unbeknownst to him one of the tablets he took, often washed down with booze, was nick-named ‘the liver eater’.

Serious damage was being done, though he was oblivious to it until his body starting shutting down in December 2016. The ticking timebomb was primed to explode.

“My stomach was churning and eventually I went to the toilet and was violently sick,” he recalled.

He called his mum Shirley and she raced over to help him.

“When I got there he was bleeding from everywhere. His mouth. His back passage. There was blood everywhere,” she said.

An ambulance was called and he was taken to hospital where he was rushed into theatre. Surgeons warned that he had a ‘50/50 chance’ of surviving the operation - and that the road to recovery would be a long one.

“He had been bleeding internally for some time. That was the black fluid. It was old blood - and there were pints of it,” Shirley told the Antrim Guardian.

“Up to this point we had no idea what was wrong. He was never in hospital, yet here he was at death’s door.

“It was heart-breaking to watch. I didn’t think he was going to make it. I was actually planning his funeral in my head.”

Thankfully Mark pulled through, but he vowed there and then that his drinking days were over.

“There is a real stigma attached to alcohol, like it’s some kind of dirty secret,” he said.

“It’s an addiction. A disease. It can be a good friend, but it’s a cruel master.

“The first step towards getting help is realising that you have a problem. You have to be honest.

“I know people will shake their head and say ‘it will never happen to me’. I used to think that, and look where I am now.

“Heavy drinking hits your body like a sledgehammer, and the longer you do it the more damage you are doing.

“This didn’t happen to me over six months. It happened slowly over years.

“If I had stuck to beer I would probably have been okay. If I’d stuck with the medication, I would be fine. But put the two together? It was like playing Russian roulette.”

Without a transplant Mark knew his odds were bleak, but he had no intention of shuffling off into the sunset. Instead, he bravely chose to offer his illness as a warning to others by going public.

“I’m not here today begging for a liver. I just want to make people aware. I want to reach out to people.

“If you are in the same position as me, don’t be afraid. You’re not alone. Of course it’s hard, but if people take more time to talk about their illness and share their experience, it will shatter some of the illusions. A problem shared is a problem halved.

“Some people believe that alcoholics have no-one to blame but themselves, which is simply not the case. Many are frightened, isolated and insecure. They expect to be shunned so the problem can spiral out of control.

“If we as a society extended some kindness, some understanding, it could help vulnerable people seek the help they need. Lives could be saved, not lost.

“I try to remain positive. I refuse to lie down. Yes, I’m a strong-willed person but I am human and I do think about what could happen to me.

Mark’s positivity struck a chord with local people. In the days after the interview was published he received ‘countless’ messages of support. He was even approached by strangers in the street who congratulated him for raising awareness.

His message of hope in the face of despair proved inspirational to many - and it stuck with them.

Mark’s condition deteriorated in July and he was rushed to London for specialist care. He was no stranger to hospitals, of course, but as he grew weaker he desperately needed the strength he drew from his supportive family.

Caroline McCready knew that the people who were so moved by his plight would happily dig deep to help reunite the Smyth clan as he faces the biggest fight of his life.

“Mark is a family man who has lived in Antrim his whole life. He faced many traumas as a child, but managed to overcome them and have a young family of his own,” she said.

“Mark has never made a secret of his struggles with alcohol, bravely coming out in the local press to warn others of the dangers of alcohol and mixing alcohol with prescription drugs.

“Unfortunately, Mark’s condition is now critical and he has been moved to King’s Hospital where they hope a liver will soon become available.

“It’s vital that he has the support of his family at this time. But as you know, flights and accommodation don’t come cheap and his family will struggle to be there for him.

“Tomorrow is promised to no-one. Antrim has suffered many sad losses recently. So please help if you can.”

Locals did not have to be asked twice. The target of £600 was smashed within days.

Medics eventually managed to bring him back from the brink - but it was clear that this latest set-back had taken its toll. The mind was strong but the flesh was weak.

But out of immediate danger plans were under way to fly him back to Northern Ireland when he finally got the call he had been waiting for.

There was a liver. A family were saying their goodbyes to a loved one, but they wanted to honour their wishes and offer the organs for transplant after life support was switched off.

Though there was regret that someone had to die to offer him a second chance, Mark had to share the news, ringing brother Darran at 4.30am to tell him that there had been a sudden change of plan.

He went under the knife later that day and it proved to be anything but routine. The surgeons worked for 12 and a half hours to keep their patient alive. His kidneys had started to fail, he had bled profusely and there was 10 stone of fluid to contend with.

Heavily sedated, Mark was taken to Intensive Care and given dialysis.

His mum Shirley said he was in a ‘sorry state’ when they got to his bedside - but he had lived to fight another day.

He returned to Northern Ireland in August 2018 and was soon getting stronger by the day. He was, said Shirley, ‘like a new man’.

“Thank God, he’s on the mend. It will be fantastic to get him home again.

“Our lives have all been on hold for the last 20 months but now he has been given a second chance. It’s a miracle. It really is.

“There were times when he was really low and in a lot of pain when I couldn’t imagine there being a happy ending to this.

“The support we have received has been phenomenal. People we didn’t even know have approached us to say that they were praying for us.

“I couldn’t pray for Mark to get a new liver, though, because for that to happen someone else had to die.”

After the initial elation, Shirley admitted that she had been thinking a lot about the benevolent stranger who had given an extraordinary gift to her boy.

“You do think about that family and what they are all going through. We can never thank them enough for what they have done.

“It’s overwhelming really, to consider that in their darkest hour they still thought about others.

“Mark was really ill. He could not have been more sick - but we’ve got him back because someone, somewhere decided to become a donor.

“Through their death, they are giving life to another. It’s a wonderful thing to do - to save another family from going through the heartbreak of loss.

“We are so lucky. So blessed. So grateful.”

Two years on Mark is still doing well. He had stared into the dark abyss, but thankfully he lived to tell the tale.

And in doing so, he may have saved many others from following that same self-destructive path.

Perhaps that the legacy of the mystery donor who died so he might live.