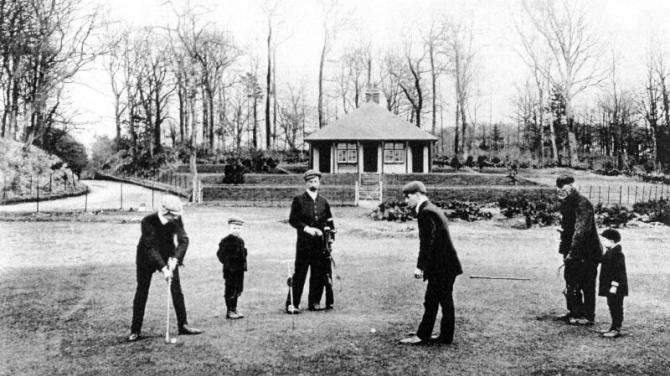 MASSEREENE Golf Club has been part of the fabric of local life for generations, and down the years thousands have spoiled walks through its lush greens and reflected on the putt that got away at the popular ‘19th hole’.

And, incredible as it may seem, the classic course that leaves many others ‘green’ with envy marks its 125th birthday next month.

The club was formed in September 1895, and ‘The Northern Whig’ was there to report on the day that got the ball rolling.

Guest of Honour was the President, the Right Honourable Viscount Massereene and Ferrard. Well, he had given them the land hugging the coast of Lough Neagh, so it would have been rude not to!

It is clear from the contemporary report that the great and the good who converged that historic day were certainly impressed by what they found.

“In the opinion of competent judges there are no superior inland links in the North of Ireland,” said The Whig correspondent.

Joining Lord Massereene at the top table were Mr HDM Barton, who was the first captain, and local lawyer Jackson Holmes, the secretary.

The opening membership was not too shabby either, with 80 already signed up to play the game that was taking the country by storm.

The course was considered ‘very varied’, though it was apparently no small task to reclaim it from nature.

“The first two holes are in what is known as the Sandy Field. A short time ago the rabbit was in sole possession, and great difficulty was experienced in banishing ‘bunny’ - a plentiful supply of gas proving the only remedy.

“The distance between each of these three holes is 300 yards.

“The tee for the third flag is on top of a mound raised, according to local report, over the remains of the men or the horses - let us hope it was the latter - who fell there in 1795.”

Is this a reference to the Rebels’ Grave which some believe holds the dead of the Battle of Antrim in 1798 - or are there yet more remains buried beneath the fairways?

The Whig goes on to give an entertaining review of each of the holes.

“The hole is a short one, only 140 yards, but a road, a hedge and a considerable sized bunker have all to be crossed; a topped ball us sure to come to serious grief.

“The putting greens at this and the next nine holes were in fine condition, and very much admired.

“Number five and six are each under 200 yards, but Lough Neagh is apt to catch a too strongly played ball at the one or a heeled one other.

“The ground between the next two holes is of a swampy nature, but a well driven ball from the tee can in each case place the player on firm, short turf.

“The second of these holes is a long one, close on 300 yards. The final on the outward course is a short one, but without a doubt one of the pretties in the links.

“On starting for the second half the players leave the shores of the Lough and enter upon the Fir Field, so called from the number of stately firs that dot the enclosure. Here the longest holes upon the green are to be found, varying from 300 to close upon 400 yards each.

“Numbers 13, 14 and 15 will no doubt be good in winter, but at present the grass is too long and very difficult to play through. The Greens Committee would be well advised were they to omit these holes and confine the play to those remaining 15, all of which afford most enjoyable golf.

“The next two flags, 260 and 175 yards respectively, bring us again onto short, crispy turf and sand hazards, while the final distance 280 yards, lands us once more over the road and close to the clubhouse.

“There are few if any inland courses that contain so great a variety of interesting hazards, and none where the putting greens could in two months be got into better order.

“Entrance fee and annual subscriptions are, we understand, comparatively small and no doubt many of our Belfast golfers will take advantage of so good a green within easy access of the city.

“A number of well known local golfers travelled from Belfast by the ‘golfers’ express’ train at noon in order to be present at the opening ceremony, which was witnessed by a big crowd.”

Among the ladies present were Lady Massereene and her daughters.

Mr Barton presented Lord Massereene with a silver mounted cleek, at the same time requesting his Lordship to strike off the first ball. Robert Russell proposed a grateful vote of thanks to Lord Massereene for the key role he had played.

He hoped ‘his Lordship would long be spared to occupy the position of its President, and that Lady Massereene and her family would enjoy long life and prosperity in their midst’.

Dr Adams then called for three cheers for her Ladyship, which was ‘heartily responded to’.

Mr SL Baillie said that he was very glad to do what he could to give the Club a good start. Of course they would understand that in getting the links into its present condition ‘a great many difficulties had to be contended with’ - and he hoped that the members would ‘overlook any deficiencies which might be discovered by them’.

During the past fortnight he had visited over 50 links in Scotland and England and in his considered opinion Massereene were ‘superior to any inland links he had seen during that time’.