One hero's unbelievable courage in the face of overwhelming adversity 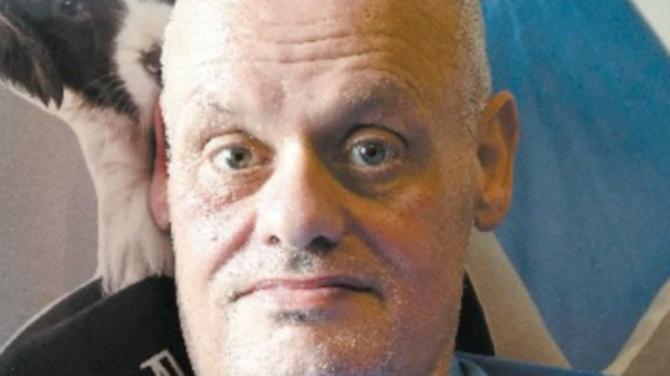 GIVEN his distinguished war record, I suppose I should not have been surprised by his inspirational display of valour - but the day I met Keith Rogers remains one of the most moving in my career.

He wanted to meet me to share his deeply personal experience of terminal illness. Five years may have passed but his stoic bravery against impossible odds has never left me.

This decorated soldier who has seen action in Kuwait and Iraq was battling for his life after he was ambushed by an enemy within.

In layman’s terms, his body had waged war on him - and, one by one, the faculties we all take for granted were being switched off.

Just six months before our meeting Keith was still standing by the sidelines watching his beloved Antrim Rovers. Since then his legs had failed him and the voice that cheered on hundreds of goals had been forever silenced.

The hands that once confidently held a gun for Queen and country during the Gulf War trembled and faltered as he typed on the touch screen of his tablet. Drained of strength it was a slow, frustrating and ultimately exhausting process, but it was his only link to the outside world.

He had been promised a more hi-tech solution - something akin to the technology that allowed Stephen Hawking to find his distinctive voice - but for the time being this had to do. Now at the mercy of his own body, Keith had learned to be patient.

But time was not on his side, and he knew it. There was no cure and, on his darkest days, precious little hope.

Family and friends were constantly by his side, but as he was slowly entombed by rebellious flesh he was painfully aware that his days were slipping away.

He knew that MND would kill him in the end. This was a life sentence which he was destined to serve in solitary confinement. Faced with that grim inevitability his agile mind was both a blessing and a curse.

“I had a major set back on Saturday. Everything came to light. Felt useless and suicidal for the first time,” he said.

But he soon banished the thought. He would never burden those left behind with the guilt, even if he could.

“My family and friends are fantastic,” he replied when asked if would consider taking his own life. Then, after a pause, he added: “I will never leave them.”

Sitting alone with Keith in his bungalow on the outskirts of Antrim, it was a painfully poignant moment.

Here was a man who has lost everything, but had gained one powerful insight: that no matter what happens, love is enough.

Each of the 5,000 people in the UK living with motor neurone disease have their own unique tale to tell - so here is a brief history of Keith.

He was born in Hemel Hempsted on the outskirts of North London and after following the ‘Gunners’ since the tender age of five he became one himself when he joined the army at 15.

He travelled the world with the Corps of the Royal Engineers, serving in Germany, Cyprus, Canada, the Gulf and Northern Ireland.

His first four month tour of the province was in 1974 and despite the simmering violence exploding on the streets he soon decided it was ‘the place to be’.

“The place was great and people were fantastic,” said Keith.

“I returned here in 1977, met a local girl in 1978 and got married in Antrim Registry Office the following year.”

Together they had ‘three wonderful children’ - Michelle, Gemma and Johnathan - who have since given him six ‘fantastic’ grandchildren. Asked to describe his feelings at his ever-growing clan he said the joyous births were the ‘happiest moments in life’.

He left the army in 1996 and started work with Homefirst Community Trust and built a second career, which would continue until 2013. It was rewarding work, but during that time his life took another unexpected twist.

“In 1999 my son, who was eight-years-old, showed a great interest in football, so after a bit of asking around I met up with Professor Chris Elliott and Derek Young who had formed Antrim Rovers Football Club.

“As a proud parent and an enthusiastic supporter I admired what I saw, so that is how my long term relationship began with the club.

“During the past 16 years I have escorted teams from the club to participate in tours to Scotland, Holland, France, Germany and across Northern Ireland.

“The teams were hugely successful on their travels and in the amateur leagues at home. Indeed, several players have gone on to earn professional contracts with well known clubs.

Then things started to unravel. His marriage ended nine-years-ago and he suffered from depression, but there was even worse to come.

In 2013 Keith noticed that his speech began to sound slurred. Soon everyone noticed. On one occasion he was refused entry onto a plane because the crew thought he had hit the bottle. Taxis he had ordered often failed to arrive for the same reason.

Baffled as to the cause he sought medical advice and went through an endless round of tests and examinations. Eventually a diagnosis came, and he was none the wiser.

“I was told I had Motor Neurone Disease and my first reaction was ‘what?’ I had never heard of it,” he said.

“I started doing some research and realised it was bad. Very bad indeed.

“MND has no known cause and no known cure. I knew then that life could never be the same again.”

No two cases are alike. Some progress slowly, like Stephen Hawking’s, others much more aggressively - like Keith’s.

It attacks the motor neurones that control important muscle activity such as gripping, walking, speaking, swallowing and breathing. As it progresses each becomes more difficult. Eventually they stop altogether.

“My health has gone downhill very quickly,” he said. “It would be fair to say that the last two years have been terrible.

“I loved talking and, being half Italian, I love eating.”

By the he had been robbed of his voice and could only dream of heaped plates of spaghetti - his diet restricted to baby food and creamed rice, fed through a peg in his stomach.

“I have lost muscle power in my arms, my ability to talk has gone completely and I can’t walk. From the neck down I am useless.

“My life expectancy is rapidly shortening. I reckon I have two years at the most.

“Strangely enough your brain is not affected. I’m still here but I can’t communicate the way I used to. Perhaps that is why depression and frustration is common.”

And that’s where his family and friends came in. Ian Yarwood, a fellow former soldier, had been a constant companion for 40 years - and while he admitted it was ‘devastating’ to see his old pal deteriorate before his eyes, he vowed to help him battle on.

“You don’t turn your back on your mates. I know he would do the same for me,” said Ian.

“We talk about what is happening to him a lot, but we also have a laugh.

“But there's no getting away from the fact that this is very serious. His brother was over on Friday and he was gob-smacked by how much he had changed. I see Keith every day so I don’t notice it as much.

“His carers come out every day and they have been great. He also has a lot of friends. When he was up at the Macmillan Unit recently he was getting 30 visits a day. This is a man who has given so much to so many people, and now they want to give some back - to help him in his time of need.”

Naturally enough, all wish him well but Ian knows this is one battle his friend can not win.

“At the moment he is very limited as to what he can do, and it is getting worse all the time. He’ll never get any better. Always worse. That’s the reality.

“Motor Neurone Disease is a terrible condition that, over time, robs people of everything. But it has also brought out the best in people too.”

In his final months, thousands were raised in his name for Motor Neurone charities.

The journey was a particularly painful one for Keith’s family, and daughter Gemma admitted that it was ‘heartbreaking’ to see her dad reduced to a shadow of his former self.

“I’m devastated that this has happened. We all are,” she said.

“This has hit him so fast and so hard that you really don’t know what's coming next. You take every day as it comes. And every day is different. MND never stands still.

“Last week, for example, he reacted badly to tablets and he stopped breathing for four minutes. We could have lost him.

“The physical problems we can deal with. It’s the mental stress that is most difficult. How are you supposed to react when you are told that there is no cure? That's there’s no hope?

“It has been really, really hard for dad. He has his bad days when he wants to give up, but we all do our best to support him. We love him to bits and would do anything for him.”

And that, said Keith, has made all the difference. This old soldier was determined to fight on. Surrender was simply not an option.

A hero to the very end, Keith Rogers was called home in September 2015.