'Cometh the hour - cometh the man' 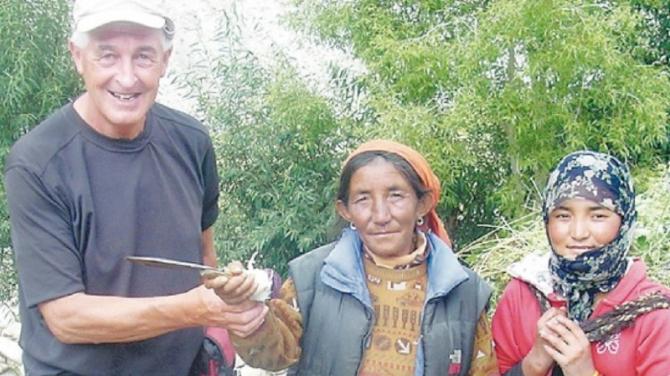 ‘COMETH the hour, cometh the man’ - or so they say.

Faced with the agonising choice of saving your life or endeavouring to save the lives of others, what would you do?

Many, quite understandably, would choose to spare their families the heartbreak and walk away. Others, however, are prepared to gamble everything.

And that’s exactly what an intrepid Antrim man did 10-years-ago, switching effortlessly from leading an adventure into the unknown to joining the race against time to save the lives washed away by vicious storms that battered India and Pakistan in the summer of 2010.

And he did it with more than a little help from his friends.

Former RAF man David Burke may have been 62 at the time, but the part-time explorer and mountaineer was far from over the hill.

The Brantwood Gardens man had worked with the British Schools Exploring Society for several years, leading expeditions for people aged 16 to 10 to far flung corners of the world - from the Norwegian ice fields to the rainforests of the Amazon.

With experience matched only by his boundless enthusiasm, he was just the man when the Society started putting together an ambitious voyage of discovery for young people from across the UK to a little-known part of the Indian Himalayas.

Assisted by kindred spirit Tom McCormick, from Saintfield, the mood was upbeat when they met up with their young charges, a team of scientists and the team doctor in Delhi on July 26.

Over the next five week they planned to explore an uncharted valley southeast of the Thanglesgo stockade in the high altitude Ladak region. Instead they discovered heroes within themselves during an altogether different adventure of a lifetime.

And to think it all started so well.

Following in the pad prints of the rare snow leopard, they set off after a one-day drive over the Khardun La Pass - said to be the world’s highest driveable road at over 18,000 feet - down into the bustling village of Hundar.

August 3 brought with it an ominous hint of things to come when heavy rain fell, forcing the team to dig trenches to divert water from their camp site. With conditions deteriorating, they organised an around the clock watch to keep an eye on the rising water levels.

Oblivious to the fact that this was just the tip of the iceberg, they decided to take to the higher ground and become the first westerners to explore the mysterious valley, glaciers and peaks.

After crossing a series of treacherous rivers they downed rucksacks and set up base camp at 16,000 feet - roughly the same height as Mont Blanc.

For the next few days the younger people, under the watchful eye of their leaders, took part in exploratory climbs into this unknown territory on the roof of the world. Along the way they discovered tantalising evidence of the snow leopard, including the carcasses of large indigenous blue sheep, but no sign of the notoriously secretive beasts themselves - though David has no doubt that they were being watched by eyes unseen from the icy mountain passes.

More friendly were the stoats and pecos. Unaware of the their visitors’ reputation, curiosity got the better of them and they wandered over to greet their unexpected guests.

“It was fantastic and the young travellers were in their element,” said David.

“Here we were exploring an area which had never been charted before. We were turning corners and had no idea what lay ahead. It was a truly exciting experience.

“There were no houses, no trails - just nature. And it was beautiful.

Ten days in, as they prepared to scale the unnamed peak towering over their high base camp, the skies opened and the rains began in earnest. And the water just kept falling.

“Obviously we were at altitude, so we could actually look down and see the storm rolling in. It was an awesome, but also a terrifying sight.

“We knew it was getting serious when the water started cascading down off the mountain - and straight down towards the river and the villages. This wasn’t rain as we know it. This was like buckets of water coming down, hour after hour.

“We watched as yaks tried to cross the wild torrents, neck deep in foam. A man wouldn’t stand a chance. You’d be washed away in a second - and sadly many were.”

This was weather on an epic scale. The 16-mile cloud burst caused the River Indus, which flows from China to Pakistan, to break its banks. The filthy tide swept inland displacing millions of people and killing thousands in its path.

The relentless rains soon had a knock-on effect for the team stranded on the mountain side. The bridge at Hundar Dok had been washed away, so the rations they depended on were not coming. David, Tom and their team were totally isolated - and supplies were perilously low.

“Word came through from the town of Ley that there were more than 2,000 people unaccounted for,” said David.

“This was rapidly becoming a humanitarian disaster, but for the time being we had plenty of problems of our own.

“The small bridges to the north and south of the valley had been swept away too, so our team of young people were effectively marooned on an unexplored mountain miles from help.

“To make matters worse our supplies were dangerously low. We were down to two eggs, some rice and some lentils. Thankfully that was supplemented by a goat which the Sherpas slaughtered for us. By the time we had finished with that all that remained was the feet.

“Looking back, that goat gave us all the strength to go on.”

And that, in turn, kick-started a chain of events that brought a chink of hope to scores of people in their darkest hour.

Using satellite phones, David was advised of the unfolding flood disaster and told ‘in no uncertain terms to evacuate ASAP’. With the bridges gone, they were advised to make their way along the valley to Hundar Dok where the villagers had erected a ramshackle bridge.

“The crossing was dangerous, with several of the team experiencing difficulty on the precarious bridge. Eventually everyone got across safely, but it was frightening.”

Reality came crashing in again, however, when they saw first-hand the plight of the people who had borne the brunt of the downpour.

“There were people who had lost absolutely everything. There were maybe 100 people there and they had no fresh water - and in those conditions disease can spread like wildfire. We knew we had to do something so we set to work.”

Over the next two days the team dug new irrigation channels and a well to restore fresh water. They also carried tonnes of stones to make the repairs to the bridge more permanent. A medical clinic was set up too, and more than 30 people sought treatment.

“Some of these people had never seen a doctor before, so they were very grateful indeed. Even the village elder dropped by.

“We also did some work with the school, telling the young people about our expedition and talking about the wildlife we had seen.

“As our stay drew to a close the elder presented us with traditional silk scarves as a token of their gratitude. It was an emotional experience for all involved.”

News filtered through that a bridge at Satchan - perhaps their last escape route from the valley - was under threat, so they set off on a seven hour trek through the cloying mud. When they finally arrived it was still standing, but only just.

They eventually returned to Ley, which was struggling to come to terms with the loss of many lives.

“The people were still stunned by what had happened, but they were battling to restore some sense of normality.

“Many were walking around wearing face masks because the stench of raw sewage was over-powering. Power had been restored, but only for an hour a day.

“There was no sign of any major relief effort, even though so many people had died. Such was the scale of this disaster, that this was just one of many towns and villages devastated.

“The weather remain unstable and the people were genuinely afraid that there was more to come. At the first sign of heavy rain or a distant rumble of thunder, they grabbed whatever meagre possessions they could and took to the hills.

“We spent another few days there too, helping in whatever way we could. All our medical supplies were donated to the local hospital because their need was infinitely more than ours.”

Eventually conditions improved enough for the team to return to Delhi and then back to the UK. Looking back, David believed the remarkable journey would shape the lives of those who took part.

“It was a very different trip than we thought it would be, but this really was an adventure of a lifetime. Yes, there was danger and yes we witnessed hardship and suffering first hand, but we also had a rare opportunity to muck in and make a real difference.

“The young people were truly marvelous. They remained calm even when things looked grim and they showed great courage, rising to every challenge placed in front of them. All of them lost quite a bit of weight, but their spirits were always high.

“From the day the rains came we were effectively making it up as we went along. Each day was a new adventure, posing new hurdles for us to cross. There were no tears, no tantrums. Instead they went out of their way to help everyone they encountered.

“The media is often very quick to have a go at our young people, but I must say that is not my experience. To say I was impressed would be a massive understatement. They did us and their country proud.”

David was too modest to mention his own towering contribution. The team undoubtedly saved lives during their travels - but they were following the leader.