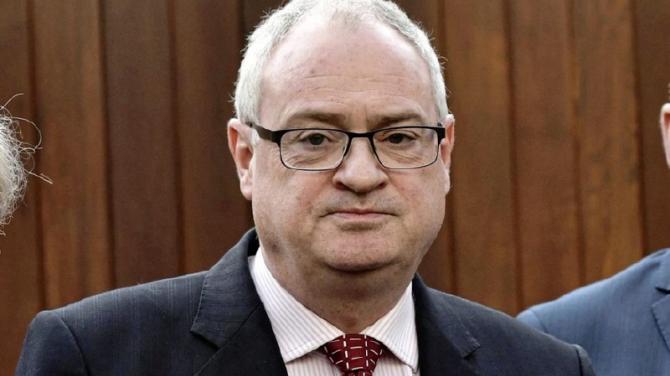 THE current Brexit deal is ‘potentially disastrous economically and constitutionally for Northern Ireland’ according to the South Antrim MLA and Ulster Unionist leader Steve Aiken.

“The Brexit deal on the table is potentially disastrous economically and constitutionally for Northern Ireland.” he fumed.

“We won`t be able to trade within our own country without jumping through legislative hoops dictated by the EU and meekly accepted by the Conservative Government.

“The lessons from the last three years haven’t been learned and we can trace this debacle directly back to the DUP conceding the principle of a regulatory border in the Irish Sea on 2 October 2019.

“On that date the Government published its ‘Explanatory Note - UK Proposals for an amended protocol on Ireland/Northern Ireland' and the DUP Leader and colleagues endorsed those proposals as ‘a serious and sensible way forward’.

“The question is, why?

“I take no pleasure at all in saying this, and it is not to score political points, but we repeatedly warned of the folly of that position and now Northern Ireland will be paying the price.

“When the DUP had the political clout to do something about it in Westminster, they blew it. That is deeply regrettable.

“At best, I find the First Minister`s comments curious.

“While Arlene Foster says that they will work to mitigate the damage to the Union, unfortunately we see no examples of this.

“There is relative silence on the UK`s Internal Market Bill, the Agriculture Minister is facilitating ‘inspection posts’ and there has been a failure to call out the inadequacies of a proposed IT system that has yet to be installed, but will be essential for goods being brought in from the rest of our country.

“The current deal shouldn`t be meekly accepted and implemented.

“This deal puts Northern Ireland on the back foot and it`s a position we should never have been in.

“It runs contrary to bombastic statements from some elements within the DUP that the EU and Dublin had been done over.

“The facts would tell you the opposite. If the Ulster Unionist Party had delivered a deal like this, the DUP would have eviscerated us.

“The next few months will be critical for the future of our Union and taking a supine approach to legislation and regulation will allow the worst excesses of the NI Protocol to be imposed on Northern Ireland, its people and economy.”