Time to face the music? 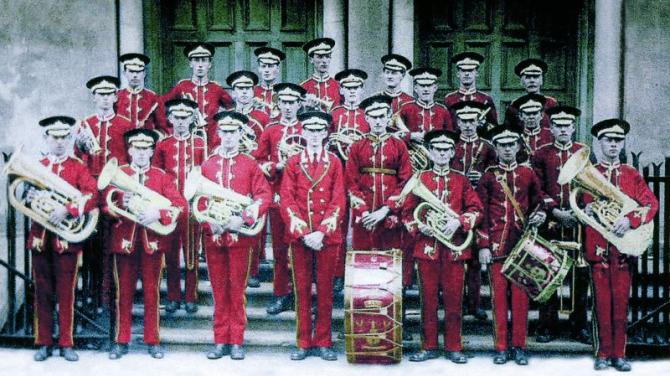 THERE can be few things worse than being consigned to the dustbin of history - yet that is precisely what has happened to one of Ulster’s most celebrated bands.

The fate that befell the Massereene Brass and Reed is certainly a tangled web, but at its centre is a local council which was at best careless, at worst cavalier, about a priceless link to Antrim’s cultural past.

The story begins at the turn of the 20th century with Lord Massereene and Ferrard. From the towers of Antrim Castle he could see the grinding poverty among the townsfolk - and a plan to enrich their lives slowly took shape.

An accomplished violinist, he decided to bestow the gift of music- and he was prepared to put his hand deeply in his pocket to do it.

In the end there were French horns, clarinets, trombones, euphoniums, tubas, cellos, cornets, piccolos, flutes and drums - all emblazoned with his family crest.

He had his instruments, now he needed his band and there was no shortage of volunteers. Soon they were practising in a band room he built in the shadow of the castle under the watchful eye of a conductor flown in especially from London.

They would go to scale great musical heights but unfortunately Lord Massereene was not there to see it. Sadly he died in 1905 before the Massereene Brass and Reed finally found their own distinctive voice - but generations of local people benefited from his life-long love of the arts.

Indeed, this was the gift that kept on giving. Two years later the valuable instruments were formally given to the people of Antrim - along with several new pieces to complete the band.

Over the coming decades the band toured extensively to great acclaim, but in time their style fell out of favour and fewer younger players joined the ranks.

By the 1970s the band was no more, and the instruments were stacked high in an office in High Street owned by George Clarke, a former Trustee.

When he learned of their existence in 1980, they were catalogued and collected by former Mayor Jack Allen who believed that they should ultimately be put on public display - perhaps at Clotworthy House, which he was negotiating to transform into an arts centre.

In the meantime, it appears that the collection was stored in the Antrim Forum. There it remained - destined not to see the light of day for another quarter of a century.

But when the instruments resurfaced it was not in Clotworthy - it was in a bar in North Antrim.

The owner of The Thatch Inn in Broughshare had purchased several items bearing the distinctive Massereene Brass and Reed insignia from a 'dealer', and had contacted the Council to find out more about the items he was preparing to put on display.

They apparently knew nothing about the instruments, which he had purchased for £200-£250 each, so he was directed towards local historian Len Kinley - a man, unbeknownst to the bar owner, who had been trying to locate the instruments for several years!

Len visited the pub and confirmed that they indeed appeared to be part of the haul catalogued in Antrim decades earlier.

The revelation sparked several calls from outraged locals for the Council to call in the police to investigate how historic items in their care found their way on to the open market in the first place.

All press enquiries and Freedom of Information requests were deftly deflected by Antrim Council. Officially at least, it was a mystery.

But the truth will out. After long years of banging his head against a wall of bureaucracy, Len finally got a straight answer. And it was frankly unbelievable.

The instruments and band uniforms had been stored under the swimming pool and had borne the brunt following a leak. They were old, they were damaged and they were unceremoniously thrown in a skip.

“Our records indicate that these band instruments were assessed as being in poor condition and irreparable,” a red-faced council spokesperson eventually conceded.

It is understood that they were later fished out by an eagle-eyed entrepreneur who reckoned they just might be worth something.

And they were right.

Indeed, playable or not, the Deputy Keeper of Musical Instruments at one of London's most prestigious museums believes that Antrim Borough Council had made a serious blunder.

“It would be a mistake to simply suggest that these are old instruments of little or no value,” she said.

“ I can see that these items had a real cultural value as they were a part of the town of Antrim's history. But these instruments undoubtedly have a financial value too.

“Instruments dating back to the late 1800s and early 1900s were hand-crafted and they can be worth a considerable amount of money.

“It would be fair to say that a very valuable nest egg has apparently slipped through the fingers of Antrim Council.”

The current Lord Massereene, the great-grandson of the man who started it all, then entered the fray. He had owned a drum and a harp, which had been purchased for the band, but they had recently been stolen - so news of the fate of the rest hit a particularly sour note.

"I feel they should be got back from the pub and back into the hands of the Council as they were obtained illegally," he fumed.

But of course they were not. If they had been pinched from the Forum it would be a different matter, but since the council had thrown them out, it was not a criminal matter. The police confirmed that ‘without evidence of a crime having taken place they will not pursue an investigation’.

There was, however, a chink of hope. The owner of The Thatch Inn, on hearing the story, said he was prepared to sell them back to council for the same price he paid - around £1,000.

Since they had thrown them away in the first place, it seemed that a happy ending was finally on the cards. The instruments were finally coming home. Right? Wrong.

The council did send a member of staff to Broughshane to look at the haul, but it seems she was not impressed. She reported back that they were in poor condition - but that comes with 20 years in storage under a swimming pool!

Antrim Council decided to pass. They may have been custodians of the Massereene Brass and Reeds legacy, and yes they might have botched it, but they were not about to start making amends for it.

“I couldn’t believe it when they said no because the instruments could not be played,” said Mr Kinley.

“Were they planning on starting up the band again?

“Imagine digging up an old sword and throwing it away because it was rusty and blunt, or dumping a musket because the trigger was broken.

“That’s the level of ineptitude we’re talking about here.

“The council had an opportunity to return these links to Antrim’s past and instead they shrugged their shoulders and walked away. It beggars belief.”

There has been no shortage of musical chairs in the council chamber since Antrim’s merger with Newtownabbey, but the latest batch of reps are still refusing to change their tune.

Perhaps the time has come, however, to face the music.