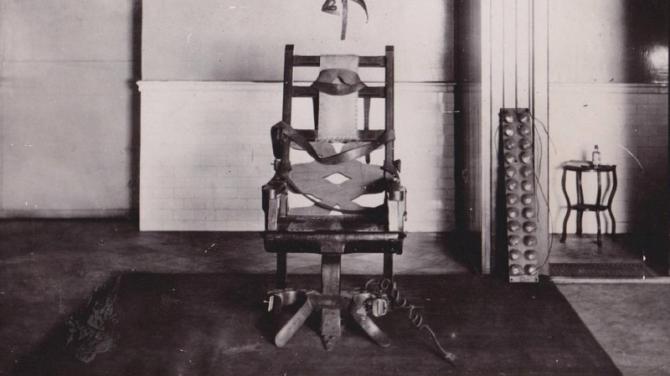 The Antrim lady is largely forgotten today but at the turn of the 19th century she was dubbed ‘the worst woman on earth’ and became the first female to be sentenced to death by electric chair.

Her crime? A string of ghastly murders across the United States.

Born in 1859 in Antrim, McNally was around five years old when she emigrated with her parents and nine siblings across the Atlantic.

The McNallys settled in New York City and growing up in the immigrant melting pot of the Big Apple, ‘Lizzie’ developed a fearsome reputation.

Her violent temper was well known and feared on the city streets but it was an ugly characteristic which would result in her estrangement from her own family.

McNally left home while still a teenager after numerous physical altercations with family members and she went rambling around the eastern States until 1879 when she married Charles Hopkins in Pennsylvania.

The couple had one son but by 1881 Hopkins had died suddenly and McNally was a widow.

She did not remain a widow for long and went on to marry an elderly gentleman by the name of Artemus Brewer.

Just months after the wedding, McNally’s second marriage was ended by the sudden death of her husband.

McNally quickly moved on to husband number three who came in the form of Hiram Parkinson. Just weeks in to the marriage he vanished without a trace.

Months into the marriage she spiked his tea with arsenic. Smith survived the attempt on his life but before he could bring his would-be killer to justice, she had already fled - along with all of his money.

McNally emerged months later in Vermont where she married Charles Pleysteil and then she disappeared two weeks after the marriage.

She resurfaced in 1888 in Philadelphia where she befriended Irish immigrant family the McQuillans. McNally had changed her name to Maggie Hopkins and with the money she had stolen from previous husbands she set up a shop which she later burned down in an insurance scam.

On St Patrick’s Day 1888 McNally was convicted of arson and was sent to the Eastern state penitentiary for a two-year stretch.

During her imprisonment, Lizzie’s son, who had accompanied her during her chaotic travels and marriages across the eastern United States, was carted off to a juvenile institution. Apparently, the lad had the same violent traits as his mother.

When McNally was released she changed her name to Lizzie Brown and found employment as a housekeeper for elderly widower Paul Halliday who resided on a farm in Sullivan County in upstate New York.

In 1890 she married him and became known as Lizzie Halliday, the name for which she would go down in the annals of criminal history.

On May 6, 1891 McNally burned down a portion of the Halliday family home. Days later she burned down one of the large barns on the farm and drove all of her husband’s work horses to the town of Newburgh where she sold them.

McNally also lashed out at Halliday’s older sons and threatened her spouse with death on several occasions. Yes, their marriage was less than a happy one!

In 1893 the Antrim woman burned down her husband’s mill - while his son John was inside it. John, who was disabled, perished in the fire and McNally was arrested.

She was deemed insane and sent to an asylum. McNally was not there long when the authorities claimed she was cured and released her.

She made her way back to Sullivan County in August of that year. It was the same month Paul Halliday mysteriously disappeared.

Neighbours and family who witnessed McNally back on Halliday’s farm at the same time as his sudden disappearance, feared the worst and contacted the police.

With a search warrant in hand, Sullivan County lawmen went searching the farm for Mr Halliday but, instead they found Margaret and Sarah McQuillan.

The lifeless bodies of the two Irish immigrant sisters were buried under hay in one of the barns. Both had been shot by a .32 Calibre five shooter.

The McQuillans, who had befriended McNally in Philadelphia, had been caught up in one of her violent episodes - and neither survived.

Days later a stench coming from beneath the floorboards of the Halliday homestead drew the attention of the police.

There they found the mutilated body of Paul Halliday. He too had been shot but his body had been horrifically mutilated. When questioned, McNally spoke gibberish and tore off her clothes. Many considered it an act of faking insanity while others were of the opinion that she was, without doubt, ‘out of her mind’.

According to contemporary reports, it is easy to see why.

“For a long time after her arrival, she refused to eat, and it became necessary for the jail physician to force liquid food through her nostrils,” the Times reported.

“In November, she tried to strangle the Sheriff’s wife. A few days later, she set fire to her bedclothes. In December she tried to hang herself with the binding torn from the bottom of her dress. On December 15, she came near to ending her life by gashing her throat and arms in a terrible manner with glass broken from her cell window.

“For the last three months it has been necessary to keep her chained to the floor.”

During her time in the county jail, Lizzie became a national celebrity of sorts.

The New York City newspapers, ever on the lookout for a sensational story, soon discovered the Halliday saga, and gave it front page coverage. Papers from around the country soon followed suit.

“From its circumstances, origin, conception and execution; its unique characteristics, the abnormal personalities and peculiar localities it involves, and, above all, in the strangeness and mystery of its great central figure, it is unprecedented and almost without parallel in the annals of crime,” New York World reporter Edwin Atwell wrote of the case.

The media had a field day with this mad murdering Irish woman. Some tabloids made the dubious claim that she had killed as a child before arriving in the States.

Some even suggested that she had a connection to Jack the Ripper. But while McNally and the Ripper certainly shared the same appetite for blood-thirsty murder, she was behind bars during his autumn of terror.

On June 21 1894 McNally was convicted at Sullivan County courthouse and sentenced to death by electric chair.

Upon hearing the verdict, she lunged for Sheriff Harrison Beecher and bit his hand. The Sheriff's hand and arm later got infected and the lawman lost it to amputation.

Even under the control of the law, McNally was still causing mayhem and destruction.

She was the first female sentenced to die electric chair and it caused a sensation, so New York Governor Roswell Flower decided to commute her sentence to life in a mental institution. McNally was sent to Matewan State Hospital for the Criminally Insane where she remained for the rest of her life.

McNally's murdering ways did not end there. In 1906 she stabbed a nurse in Matewan State Hospital. Nurse Nellie Wicks was jumped on by McNally who had stolen scissors and with the deadly implement she stabbed the unfortunate nurse 200 times.

McNally had married six times. Two husbands had died suddenly. Two husbands disappeared. One was almost poisoned and another was shot dead. She killed her stepson in a fire while her own son was institutionalised. She shot dead two fellow immigrants and stabbed a nurse to death.

The woman from Antrim had the eastern States of America in a grip of terror in the late 19th century and even when she was under lock and key she was still dishing out waves of violence.

Elizabeth Margaret McNally died on the 28th of June 1918 and was buried in an unmarked grave in the grounds of Matewan State Hospital.