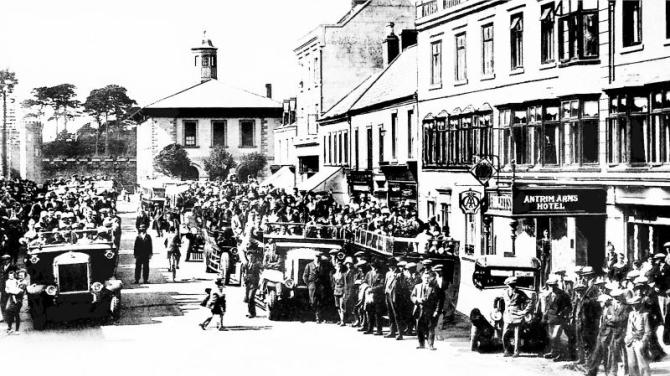 FOUR decades ago the last of Antrim’s grand hotels came crashing down, marking the sudden end of a golden era.

A century ago, the town’s central location made it a bona fide tourist mecca and at a time four hotels did a roaring trade.

It was a diverse market too, ranging from a comfortable suite for the wealthy adventurer to a modest ‘bed and board’ for the weary traveller.

But there was certainly something for everyone to enjoy.

The oldest and grandest of them all had to be the Massereene Arms.

Founded in 1754, the hotel was justifiably proud of its ability to stable eight horses - quite a draw in the days when the carriage was still king.

Aside from its well-heeled guests who relaxed out front on the colonial style cane furniture, the hotel served as the headquarters for the military officers at the time of the Battle of Antrim.

Politicians and the gentry used the hotel for decades, but few created the splash that Mercedes Gleitzer did when she and her entourage rolled into town in 1929. But this was business, not pleasure - for she had made the long journey to swim Lough Neagh!

The national press camped at the hotel eager to photograph the ingenue, who was sponsored by Rolex no less.

The hotel boom was good news for other retailers too. Peter Conway’s souvenir shop, right next door to the Massereene Arms, did a brisk trade during high season - and their 24 hour photo developing service was in demand.

But like all good tourist industries, there was a more affordable alternative.

The Antrim Arms proved a hit with working class folk who sailed over from England, mainly Lancasshire mill workers, to sample the beauty of Ireland’s wild north coast.

But for those who preferred some quiet respite, there was the Lough Neagh Hotel. Unlike its rivals there was no bar or restaurant on the ground floor. Instead it housed retail shops, such as JM Murphy.

Hall’s Hotel nipped at the heels of the Massereene Arms.

Its status was instantly raised when Lord and Lady Massereene took up residency after Antrim Castle burned in 1922.

As the 1930s approached, five stories were added at the back and three at the front, including a ballroom and 40 bedrooms to cope with soaring demand.

It was a familiar sight to see jaunting cars casually parked outside, and five buses left every morning to visit the province’s top attractions.

During World War Two the hotel became the home to American GIs while British radio and film stars like George Formby were shipped over to entertain the troops.

After the opening of the new airport at Aldergrove, Hall’s merged with the Massereene Arms to accommodate a new influx of international visitors.

But the boom years were numbered.

The opening of the M2 directed a lot of traffic - and business - away from Antrim town. And for the hotel trade, that was the beginning of the end.

It held on until the late 1970s, but eventually the shutters came down on Hall’s.

Enkalon and Castle Street were next to fall.

‘Old’ Antrim would never be quite the same again.