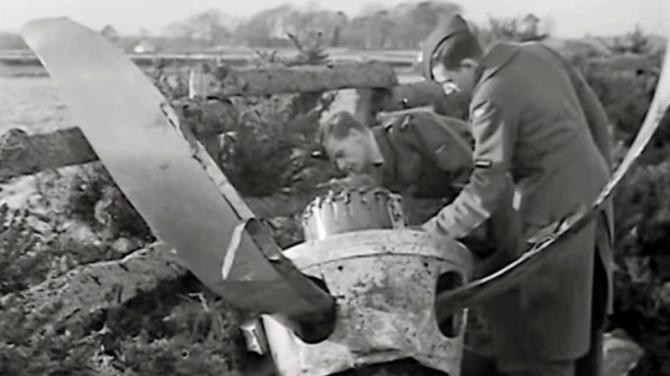 IT should have been a routine flight - but the voyage of the ‘Lord St Vincent’ ended traumatically as her passengers and crew were caught in the fatal midst of the worst aviation disaster in Northern Ireland’s history.

The doomed British European Airways BEA Vickers Viking aircraft had taken off from Northolt Airport in London at 7:27pm in the evening. It was January 5th, 1953, and flight conditions were far from ideal. There was a persistent drizzle and dark clouds shrouded the moon, rendering navigation difficult.

The ‘St Vincent’ took to the air 25 minutes later than had been timetabled, but pilot Captain Gordon Hartley was certain he could make up for lost time as he sped the twin-engine plane across the Irish Sea. Within two hours, he was making his final approach onto his destination at Nutts Corner Airport.

Three miles out from the runway, air traffic controllers on the ground contacted Captain Hartley to inform him that he was flying some 90 feet above the glideslope - in other words, he was coasting at a height and trajectory slightly too high to ensure a safe landing.

Hartley was advised to swing the plane around to make a second approach, but he was adamant that the antiquated lights of the Nutts Corner airfield would guide him home. This was to prove an extremely deadly miscalculation on his part.

Rapidly declining in altitude, the aircraft shook roughly as it clipped a pole supporting an approach light not far from the aerodrome. Then it smacked harshly into another and another, each impact no less jarring than the last.

As Captain Hartley lost control of the stricken plane, it smashed into a van before careening into a brick building that housed Nutts Corner Airport’s instrument landing system. In the words of a contemporaneous account of the crash published in The Times, the airliner was effectively ‘burst open’ in this last collision.

Debris and wreckage flung from the shattered aircraft was strewn over a wide distance. The engines, which only shortly before had screamed the eardrum-piercing wail of an aircraft in its death throes, were now silent. The eery stillness did not last, however, as the fierce crackle of flames could soon be heard as a number of fires broke out amongst the tangled wreckage. Rescue teams racing to the scene were greeted with a panorama of blazing devastation.

Of the 31 passengers onboard the ‘Lord St Vincent’ on the night of January 5th, 1953, 27 were killed outright. Three of the plane’s complement of four crew members also died - including the pilot. Given the sheer violence of the aircraft’s disintegration, it was a minor miracle that eight managed to live to tell the tale at all.

Cabin steward James Young was the only member of the crew to survive the carnage - yet the local man wasn’t meant to have been on the aircraft in the first place. In what should have been an inconsequential decision in the long term, he had opted to trade shifts with a colleague so that he could fly home to visit his family.

In April 1953, only a couple of months after the crash, a board of inquiry was formed to investigate the incident. The board found that Captain Hartley had made ‘errors of judgment’ - although they stressed that he should bear ‘no moral blame’ for the loss of life.

It is believed that the captain, upon learning that he was flying too high to safely gain the runway, had overcompensated and brought the ‘St Vincent’ down at too sharp an angle.

Hitting the van, the board deduced, had stopped any chance of the plane reaching the runway - and that striking the building had made ‘tragedy inevitable’.

To ensure that such a disaster could never be repeated, it was suggested that the instrument landing system building should be rebuilt offset from the path of landing aircraft or even underground, whilst approach lights were affixed more prominently upon the top of their respective poles.

Nonetheless, within a decade of the accident, Nutts Corner Airport was abandoned, and Aldergrove Airport became the primary civil airport in the province.

Today, it is difficult to ascertain the precise location of the crash site amidst the dilapidated and overgrown remnants of the former Nutts Corner airfield - and no memorial exists to mark the event.

In part, this is because the Nutt’s Corner calamity was, sadly, usurped in local collective memory when a catastrophe of even greater scale occurred only a few weeks later. On January 31st 1953, ‘The Princess Victoria’, a British Railways car ferry, sank in the face of a heavy gale in the Irish Sea. 133 people died, including the Northern Ireland Finance Minister and Deputy Prime Minister Major J M Sinclair, and Sir Walter Smiles, the Ulster Unionist MP for North Down.

But, for those whose lives were changed that calamitous night 67 years ago, the ‘forgotten’ Nutts Corner Air Disaster is anything but - and to this day the shockwaves remain all too keenly felt.

In 2018, the Colvin family from the United States crossed the Atlantic to see for themselves the scene of the accident, and it proved to be an emotional visit. Mrs Colvin’s aunt, Irene ‘Delores’ Griffing, was among those who had perished.

Counsellor Paul Michael hosted a special reception for the American visitors, and he invited others who had strong memories of the disaster.

They included Roy Coulter, who was on duty the night of the crash as a fire officer at the Nutts Corner airport.

Bill Eames also met with the family. The ex-RAF officer was an air traffic controller that dark winter’s evening – and he was the last person to speak to Captain Hartley before the towering human tragedy unfolded before his eyes.

Ernie Crombie, of the Ulster Aviation Society, also met the special guests and shared stories about the last remaining piece of the plane – the tip of one of the propeller blades which was shorn off on impact.

“Every time I look at that piece of aluminium alloy, yellow in colour, I think of the 27 souls who perished that dark evening on January 5th 1953 when the British European Airways Vickers Viking was ripped apart,” he said.

“The tip was donated by someone who picked it up from the debris at the scene soon after the crash. We keep it as a kind of memorial to the victims.”

A commemorative plaque and framed print were erected in Antrim Civic Centre, and Councillor Michael presented a copy of it to the Colvin family.

He said that the Colvins had been moved that their loss had not been forgotten.

“Time is a great healer, but a tragedy on this scale leaves an indelible mark,” said the former Mayor.

“It was an honour to meet Mr and Mrs Colvin, as well as the other guests linked to the disaster. They shared their memories and it was a very moving experience for all involved.”

In recent years, however, there have been heightened calls for the installation of a permanent memorial at the scene of the crash – a place to honour the dead of Northern Ireland’s all-time worst aerial disaster, and to receive the stark warnings of history so as to ensure such a tragic episode may never happen again.