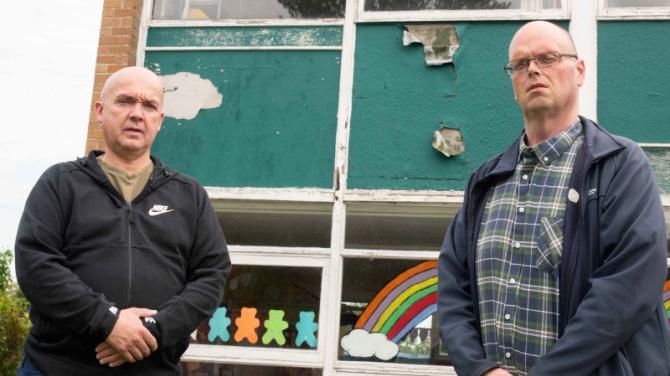 THE Mayor of Antrim and Newtownabbey Jim Montgomery has demanded action to help Ballycraigy Primary School after visiting the facility in person to investigate the crumbling structure.

“It is imperative on the Education Authority to urgently undertake an upgrade of the structure of the school.” he fumed this week.

“The facade of the building is decaying rapidly and no school in these times should be in such a state.

“Inside the building there are clear areas that need improvements.

“I was recently shown parts of the school in need of essential improvements and was truly shocked to see that the Education Authority had allowed the building to decline this much.

“Money for improvement works was committed in 2010 and again in 2016 but neither packages of money or maintenance were fulfilled, the latter because of the collapse of the Assembly.

“I have written to the Chief Executive of the Education Authority raising my concerns over the state of parts of the building and am asking for an urgent survey of the school with essential maintenance undertaken. Schools should not be in this state and the pupils are being failed by the Education Authority.”

His UUP party colleague, Councillor Leah Smyth added: ““It is a disgrace that a school is left in this state despite it being brought to the EA’s attention several times.

“I urge the Education Authority to quickly assess what is required and get it sorted.

“The staff and pupils at the school deserve so much more than this.”