A dander through Dunadry 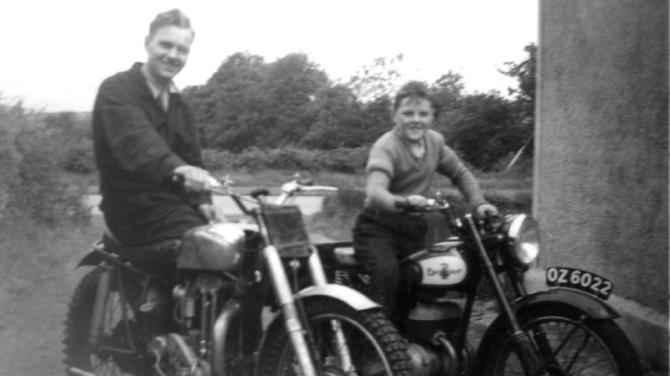 WEARING masks and living with the threat of an unseen enemy might seem like a very modern phenomenon, but for some local people, it was part and parcel of growing up as a war child.

One of those children was Jack Agnew, who spent an otherwise idyllic childhood in Dunadry.

The Antrim Guardian caught up with Jack Agnew after he recounted some of his childhood memories following a performance in Antrim Library, Sharon Dickson's 'Monologue of the Belfast Blitz' back in 2017.

Aged seven, Jack and his family ‘flitted’ to the village in 1940 from the nearby Ballybentragh Road, when Dunadry was just a ‘front street’ and a ‘back street’.

Now, the area is developing rapidly and Belfast commuters are being attracted to the many housing developments springing up in the rural beauty spot.

The house in which he lived, immortalised in a 1906 portrait which Jack treasures, is located roughly where the reception of the Dunadry Hotel now sits.

There, he enjoyed a carefree time with his four siblings and can still name every family who lived in the area.

Like many small villages, Dunadry was touched by the war, and Jack and his neighbours had a front row seat.

People collected their newspapers, metal railings were taken off the fronts of houses to be melted down for munitions and gas masks were fitted at the local gospel hall - which used to be a blacksmith’s.

“I can remember the news coming on the wireless and the adults talking about how Britain was now at war with Germany,” said Jack.

“I can remember the invasion of Poland.”

Jack, who later moved to Antrim, recalled the stir caused in the village when strangers from foreign parts arrived.

“The British soldiers came first in about 1940, they were staying in Clady and the Bleach Green,” he reflected.

“My father had a Citroen Big 15 which could hold about eight people.

“It had a gear stick on the dash and bench seats, so you could have three in the front, three in the the back and there were two small seats at the rear.

“There was Fox’s, which was a wee roadside pub where Ellie May’s is now, but the soldiers always wanted to go to Ballyclare on a Saturday night for a feed of drink or go to the Town Hall for a dance. “

As a child fascinated by engines and machinery, Jack loved to look at the Bren gun carriers and armoured vehicles, while Spitfires and Hurricanes often flew overhead.

He also loved to watch his own father tinker with the Leyland lorry on which he delivered coal.

He adds: “There was a British soldier called Harold with auburn hair, I remember him being about six foot to me, but maybe that was because I was small.

“I remember my mother doing his hair, he would sit in a chair and she would put rollers in it like a woman.

“We all thought he was a cissy but he must have thought he looked good!”

Jack was lucky to hear stories from his grandfather about the First World War at a time when many did not talk about their experiences.

But fears over what weaponry the Germans would use in their next conflict meant that the people of Great Britain and Northern Ireland were ill-prepared when the bombs began to fall.

“He told me the stories,” said Jack

“There were four of them, him and his three friends who joined up, he survived but others didn't make it.

“The Germans used mustard gas in the Great a War and there was a great fear that it would happen again so we all had to be fitted with gas masks in the gospel hall.

“I hated mine, it was so claustrophobic.”

But the Germans' weapon of choice during WW2 was not gas - it was instead bombs which rained down from planes flying overhead,

Jack said: “We didn't have an air raid shelter, but I remember the siren which was fitted to the top of the Town Hall in Ballyclare and the noise it made when it sounded the all-clear.

“The siren scared the life out of us, it was an eerie sound.”

Jack vividly remembered ‘the red skies over Belfast’ and seeing German planes swoop in over the lough as parts of the city were razed during Easter 1941.

And with such destruction, came the refugees from the city.

“We had a woman called Harris and her son, they stayed in one of the front rooms of our house, her son was with her and he was quite profoundly disabled.” he recalled.

“Nearly everyone in both streets took someone in and many families liked it so much that they stayed.

“The Wells family, I know, settled in Antrim.”

Rumours from Belfast had a profound effect on the local children.

“There was talk that after the second attack a bomb had landed in Bellevue Zoo and all the animals had escaped and that there was a lion on the loose!” he said.

“I was frightened, I used to pad around the street hoping not to make a sound so that the lion would not catch me.”

Jack made friends with Eric Ferguson, from Duncairn Street in Belfast.

“We were quite happy to see them, I thought the world of Eric.”

Times were tough for local families during those years.

There was also the shadow of tuberculosis, which killed a neighbour of the Agnews, James Patton and his brother John.

“There was no light, no streetlights.” said Jack.

“There was a turbine at the factory and a generator which ran off the race from the Six Mile Water, which sometimes gave electricity but it was only a 20 watt bulb so it wasn't very bright and sometimes the turbine would stop. We had lamps as well.

“During the blackout there were masks to go over the headlamps of vehicles, even though they were not very bright in the first place, they were only six volts.

“One night my mother was putting my sisters to bed and didn't think to cover up the skylight above the room.

“The local policeman Bob Kane and his associate knocked on the front door and my mother was summonsed and fined ten bob, even though his mate wanted to let her go.

“He wasn't very popular after that.

“Nobody had a television. If you were lucky you had a wireless with a wet battery that needed to be charged.

“I remember Lord Haw Haw and his propaganda transmissions from Germany, when he praised all the things that the Germans were doing.

“But the English were doing the same thing back!

“To entertain ourselves, we played rounders, the girls played hopscotch, and in Dunadry there were plenty of places to play hide and seek,

“I used to go to the railway halt and they used to let me watch and help them.”

“There were white and black soldiers and you could tell that the whites hated the blacks.” said Jack.

“They brought candy and cigarettes, I can remember the reek of the cigarettes as my father smoked them.

“The Americans were mostly at Langford Lodge where their aircraft were based.

“One of them crashed near the ‘corkscrew road’ which is now known as the Burnside Road.

“All the children went to look at the crash site.

“There was a parachute with flesh stuck to it and live bullets lying around everywhere.

“We were too young to realise how dangerous it was but I don't think any of us were bold enough to take any 'souvenirs'.

“They had Dodge vehicles which I liked to look at. One of the black soldiers was smaller than the rest and he was a boxer.

“I remember at the camp he took on three guys in a row and beat them all, one after the other, he never hit any of them in the face, always the chest.

“There was one time when a woman was accused of stealing a wallet from one of the black soldiers in the camp and the guy was very angry and he was going to throw her over the fence into the Six Mile Water.

“The boxer came along and hit him in the solar plexus and she ran off into Fox’s for help in a state of undress.”

But despite some wartime drama, life continued normally for most people in Dunadry.

“Spuds were the staple diet.

“There was a lorry that came on Tuesday and took your order an' would come back on Thursday with your groceries,” said Jack.

“There was powdered milk and condensed milk, which I used to love.

“Butter was practically non-existent. You could get coupons for sweets which you were allowed once a month.

“A man called Jim Courtney had a shop in upper Burnside and you could sometimes get some extra sweets off him.

“My mother and grandmother were the best bakers in the country. They made great soda and fadge.”

Jack remembers the bonfire lit at the bottom of the Rathmore Road to mark VE Day in 1945, noting that things were still tight even years after peace was declared.

“Petrol was still rationed into the early 1950s,” he said.

“Anyone lucky enough to be able to buy a new car had to keep it for two years, some had cottoned on to the fact they could re-sell it for a big profit.”

Educated at Parkgate and Shanoguestown, Jack recalled his teachers, including Joe Malone.

Children were caned for smart talk or hit with a ruler on the knuckles to help ‘improve’ their handwriting.

Jack did not enjoy ‘tech’ and was overjoyed when his maths tutor told him he was allowed to draw lorries or flowers instead after scoring 10 out of 100 in one particular test.

He quickly returned to his family business and helped his father as a mechanic.

Cork stoppers from the bottles of stout at Fox's pub were collected by the landlady Nellie and were cut to line the drive plates of vehicles.

“There was a use for everything back then!” Jack laughed.

Jack was also a keen motorcycle racer and like his father, delivered coal.

He also developed a keen interest in ballroom dancing in later life, taking it up in his 40s and continuing into his 80s.