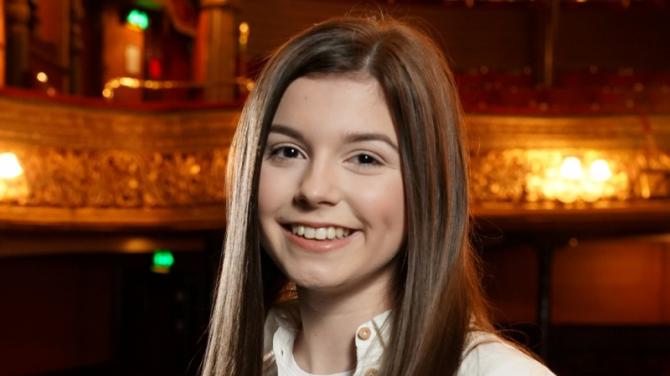 A TALENTED actress and singer from Antrim is asking for your votes after a film she stars in was shortlisted for a global prize by the World Health Organisation.

‘Grounding’ tells the story of Sarah, a shy 15-year-old girl, who finds the courage to open up about the abuse she and her brother have faced and the psychological consequences of it while attending an appointment at a children's mental health facility.

Victoria is no stranger to the stage, having performed at major venues all over Northern Ireland and even sang for the Queen at St Paul’s Cathedral as an Antrim Grammar schoolgirl.

She also raised spirits during the coronavirus lockdown by performing live on Facebook from her own front doorstep at her family home in the Dublin Road estate.

‘Grounding’ was reviewed by World Heath Organisation staff working on mental health from their offices around the world and an internal jury presided over by WHO’s Director of Mental Health and Substance Use, Dévora Kestel, selected the film, alongside three others to be showcased as part of the WHO’s Mental Health Film Prize.

Victoria said: “It is a real privilege to have been selected from the many films submitted and we are now part of a public vote for the top prize, which will be announced on World Mental Health Day, 10 October, during WHO’s ‘Big Event For Mental Health’.

“There was so much time and effort put into this film and we would love to win overall so please, if you can, take literally less than a minute out of your day to vote for ‘Grounding’.”

“Thank you to everyone who has already voted, it’s very much appreciated.”

According to the WHO, the Health for All Film Festival ‘aims to put storytelling power in the hands of film-makers and seeks to showcase the role of individuals and communities as champions for health and well-being’.

The WHO received nearly 1300 entries for the inaugural prize.

These numerous entries came from more than 110 countries and focused on a wide range of topics, such as the challenges of providing health-care in remote areas and countries in conflict, the realities of living and battling cancer, and the courage and resilience of nurses and midwives in the face of the most challenging of circumstances.

Filmmakers were invited to submit a short film for one of three categories: video reports, animation, or nurses, and midwives, to mark 2020 being the International Year of the Nurse and the Midwife.

But there were so many submissions regarding mental health, a separate topic was created.

Victoria has trained with Belfast School of Performing Arts and is heavily involved in musical theatre.

Her passion for singing, dancing and acting has lead to her playing many leading roles including ‘Wednesday’ in ‘The Addams Family’ and ‘Ann’ in ‘Half a sixpence’.

Last summer, Victoria performed in the Grand Opera House, Belfast in the lead role of ‘Kim’ in ‘Miss Saigon’.

‘Grounding’ was written, directed and produced by Oisín-Tomás ó Raghallaigh at Avenue 7 Productions

The film has already caught the attention of the industry, having premiered at 'The Richard Harris International Film Festival' in Limerick almost a year ago.

Since then, the film has been screened at film festivals around the world, including London, Norway and the USA.

Victoria won ‘Best Actress’ of the month and was nominated for ‘Best Actress’ at the Gold Movie Awards for her role and the film has already won ‘Best Young Talent Screenplay’ at the New Renaissance Film Festival London’s Screenplay competition.

‘Grounding’ also scooped ‘Best Film’ in the European Section-C of the Camera Zizanio, which ran alongside the 22nd Olympia International Film Festival for Children and Young People, which featured 101 great films from 31 countries in just one section.

Voting in the WHO contest is open until this Friday, September 25.

You can watch the film and vote for ‘Grounding’ by logging on to https://www.who.int/initiatives/