Looking back in anger 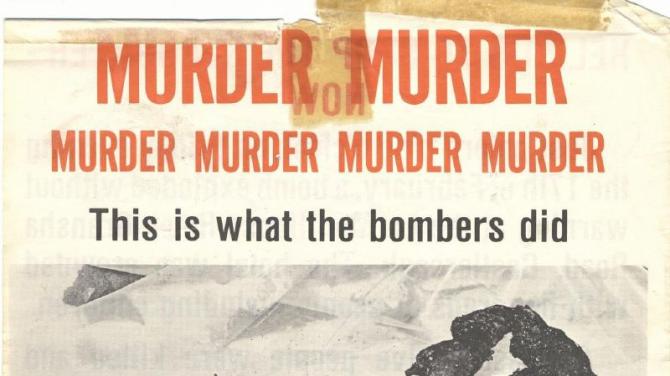 WE are often told that ‘to err is human, to forgive divine’.

There’s no doubt that for some, the decision to turn the other cheek can be a transcendent, life-affirming experience - chiseling away the wedge driven between people by the men of violence.

But what if that is a bridge too far? What if you have been so grievously wronged that forgiveness remains forever elusive?

Like thousands of others, an Antrim woman’s life was changed forever when the dark shadow of sectarian hatred fell over her family during the Troubles.

Rita Morrison (formerly Crawford) was robbed of a doting daughter and a loving son-in-law in one of the worst atrocities during decades of dark days.

And in a painfully candid interview in 2003, she told the Antrim Guardian that she was still haunted by her terrifying glimpse ‘through the gates of hell’ at the La Mon House Hotel a quarter of a century before.

The IRA blast incendiary was detonated with no warning as the Irish Collie Club gathered for their annual dinner dance in the popular nightspot.

Rita was the Club’s secretary and though long, lonely years had passed she recalled the events of that fateful night ‘as if it were yesterday’.

“It’s with you all the time. It never goes away. It’s a wound that never heals,” she said in a soft and faltering voice that was still raw with emotion.

“My life, and the lives of dozens of others changed forever that night which is perhaps why it has all remained so terribly vivid.”

Three married couples perished in the flames that night. Amongst them was Rita’s daughter, 25-year-old Elizabeth McCracken, along with her husband Ian.

The young couple, who had been married for just 18 months, had agreed to attend the Club’s annual dinner and there was ‘much excitement’ as they prepared to face the late winter chill for a rare night on the tiles.

“Elizabeth was an only child. She had beautiful blue eyes,” recalled her mum.

“Elizabeth really did look very pretty that night. She was wearing a peach chiffon dress with a fur bolero. Her husband had bought her the dress as a present.

“She looked very beautiful and I ran around introducing her to everyone. I was just so proud of her.

“Ian’s mother, Peggy, was sitting at a table with my husband Ernie and myself, while Elizabeth and Ian sat at a table close by with another young couple. Ernie had wanted us to sit together, but there wasn’t enough room at either of the tables.”

They were served the first course shortly after 8pm and the waiting staff were clearing the plates at around 9pm when the fire bomb exploded.

The device had been hung on a grille by a window and when it detonated it sent searing sheets of flame from four containers of petrol across the room. It was, said fire investigators, ‘utterly devastating’.

“The power was cut off immediately so we were plunged into darkness. No-one knew what was going on.

“Then it was like the sun had exploded in front of my very eyes - a huge, bright fireball of light and the most deafening noise.

“Then the flames came. They kept rising higher and higher.

“People were on fire. They were rolling around on the floor trying to put the flames out. Nobody knew what was happening. The lights had gone out and we couldn’t see.

“People were getting up out of their seats, squealing and panicking. But Ernie and I were glued to the spot. We didn’t know what to make of it - or what to do.

“Someone pushed us forward and kept pushing us out through the kitchen. It was full of broken crockery. Everything was smashed and ruined.

“A man grabbed a pair of curtains to wrap around his wife because she was on fire.

“The we were outside, but Elizabeth and Ian were nowhere to be found. I thought they were coming behind me - they weren’t sitting that far away from us so they should have made it outside shortly after us.

“I kept saying ‘Elizabeth, Elizabeth. I want Elizabeth. Where is she? I can’t find her’.

“At first we thought everyone had managed to get out, but as the minutes became hours we realised that people may have been killed.

“We searched everywhere that night in a blind panic. There were few telephones in those days, so we searched all the hospitals in Belfast and different police stations.

“We were at Dundonald police station at around 5.30am when we found out that the remains of Elizabeth and Ian had been discovered. The police came with some of Elizabeth’s jewellery and that was it. They were lying incinerated inside.

“The doctor who identified my daughter and son-in-law said he had no idea what he was looking at. They were just a black mass on the floor.

“The next few weeks none of us lived because we were so troubled.”

It has understandably been difficult coming to terms with the tragedy - and the knowledge that the device was primed deliberately.

There has been anger but, she hoped, no hatred.

“People sometimes ask me if I forgive those who did this terrible thing and I always say that I don’t hate anyone,” said Rita.

“I have a lot of Catholic friends, but the people who did this were not true Catholics.

“They deserve to be punished in this world - and in the next.”

In September 1981 a labourer from West Belfast was given 12 life sentences for the manslaughter of the people who died, but many of those involved in the outrage evaded capture.

“There is always talk of enquiries into this and that, but why can’t we get to the bottom of what happened at La Mon all those years ago and who was responsible?

“Twelve good people are not here today because of this and many more have suffered terribly.

“Surely the time has come to give families the answers they have craved for so long?”

Speaking almost two decades ago, she admitted that life since the blast had been ‘difficult’.

She and Ernie had moved to England for a time ‘to help them forget’ - but they soon longed to return.

Driven by their continuing love of animals they set up boarding kennels beside their home on the Birchill Road in Antrim.

They had planned to retire to the north coast, but Ernie died just two weeks before the big move.

Rita had learned to philosophical about her loss, but she admitted that her mind often drifted back to that night in February.

“I’ll never get over losing Elizabeth and Ian, but at least I’ll always remember Elizabeth as the beautiful young woman she was. Other people survived with horrific injuries, so I suppose in a way I’m glad that she was not left in pain, scarred and destroyed.”

But she has resisted any attempts to ‘elevate’ people who may have any links to the atrocity.

In 2008, for example, she voiced her disappointment that the DUP appeared to be preparing to share power with Sinn Fein after the St Andrew’s Agreement.

The move, she said, came as a ‘bolt from the blue’.

“It came as a big shock when the DUP were falling into line with Sinn Fein,” she said at the time.

Rita added that the party would not be welcome at that year’s 30th anniversary commemorations.

Former Antrim Councillor Mel Lucas, who had quit the Democratic Unionists for that very reason, said the party ‘deserve to be ostracised for their treachery’

“I can fully understand the anger of the families. These people had looked to Ian Paisley for leadership, yet now they are basically joined at the hip with the very people who supported what happened at La Mon,” he fumed.

“To this very day there has been no remorse from the senior republicans, and it widely known who sanctioned this despicable atrocity.

“Let’s not forget that this was not a so-called military target. This was the Irish Collie Club. How could even the most twisted mind justify the slaughter of those innocent people?

“If Sinn Fein/IRA are really concerned about the victims why don’t they hand over the people who brought mass murder to La Mon that terrible night? This is what the victims want - justice, not hollow words.

“I don’t blame the families for being angry at this difficult time. If I were in their position I wouldn’t have the DUP about the place either.

“The victims have been betrayed for a handful of silver.”