The rise and fall of Antrim workhouse 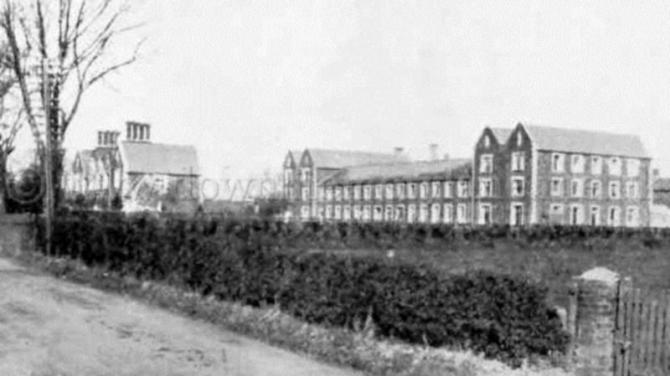 IN 2003, the construction of Antrim’s new branch of Tesco was well underway on the site of what was formerly the Massereene District Hospital.

Whilst excavating the plot to pave the way for the supermarket’s car park, however, workmen were chilled to uncover grim mementos evocative of the locale’s chilling history.

Skeletal human remains, believed to have lain undisturbed since the mid-19th century, were liberally scattered throughout the planned building site.

Development continued at a sporadic pace as, time and time again, work was halted and the police summoned to verify and investigate the latest findings.

Given the Massereene Hospital’s past role as a Victorian era workhouse, local historians came to a logical conclusion - that the builders had unintentionally unearthed a typhoid pit.

It was a period of extreme hardship marked by epidemic levels of hunger, and the community attempted to implement a number of ad-hoc measures to slow the unstoppable tide of poverty.

In 1847, a meeting in Randalstown ‘held on Saturday, 23rd January…to take into consideration the state of the suffering Poor’ led to the ‘unanimous’ decision to establish a temporary soup kitchen ‘for the purpose of relieving their present urgent distress’.

The soup would be distributed on Tuesdays, Thursdays and Saturdays via a ticket system, and the kitchen boasted substantial patronage and monetary support. Lord O’Neill alone donated £50 - comparable to a hefty £5,691 in today’s currency.

However generous and determined such benevolence was not enough to stem the growing scale of the pauperdom and starvation running rampant in the country. For all too many, the workhouse beckoned inevitably upon the horizon.

By the time of the Great Famine, workhouses had already been a staple of poor relief for centuries. The Poor Law of 1601 had assigned responsibility of the poor to parishes, who in turn built rudimentary workhouses in order to employ the poverty stricken who sought them out.

However, the 19th Century was to provide the enduring image of workhouse life - as famously depicted in Charles Dickens’ ‘Oliver Twist’- in collective memory.

The Poor Law Amendment of 1834 standardised the poor relief system across Britain, and stipulated that those in need of aid could no longer claim it whilst living at home. Instead, they would be forced to move into the local workhouse in order to avoid slipping into total destitution.

The workhouses, however, were not charitable for benevolence’s sake, operating as they did under distinct dual intentions. Workhouses may have been the historical equivalent to today’s welfare system, but they were by no means designed strictly with hospitality in mind.

Given the prevailing attitudes of the day pertaining to poverty - namely, that poorness was symptomatic of irresponsibility and laziness - workhouses doubled as brutal moral reform centres. Conditions were intentionally harsh and degrading so as to serve as a deterrent against those who might waste resources by seeking poor aid unnecessarily.

Yet, despite the dissuasive symbol of the workhouse, vast swaths of the Irish populace were forced through the doors of these greatly feared institutions, particularly when famine struck in 1845. It is a sobering reflection of the scarcities of the period that the workhouse was so often chosen in favour of more long months of penury.

The Antrim Workhouse, completed in 1843, was declared fit for use on September 4th that year and admitted its first intake of inmates some two weeks later.

The sprawling building occupied a six-acre site and was designed to accommodate a maximum of 700 inmates. It lay within the jurisdiction of the Antrim Poor Law Union, which was overseen by 24 elected ‘Guardians’ and covered an area of 181 square miles.

The entrance and administrative block was home to a porter’s room, a waiting room, and the Guardian’s board room on the first floor. Behind that, the masters’ quarter could be found, flanked by two inmate wards categorised by gender.

A number of specialist facilities - a bakehouse, a washhouse, an infirmary, a chapel, a dining hall, and, to use the language of the time, an ‘idiots’ ward’ – comprised the remainder of the workhouse.

A fever hospital was later erected to the east of the workhouse with a burial ground to the rear - speculated to be the source of the human remains found by the construction workers in 2003.

An arriving inmate could expect to be stripped and washed in a small, communal bath before being issued with a coarse, itchy, rudimentary workhouse uniform and a pair of basic wooden clogs.

Ample dehumanisation was incorporated into due process, as revealed by the minimalistic entries within the Antrim Workhouse Indoor Admission and Discharge Register. One pair of sisters, entering the Antrim workhouse on January 6th, 1848, were described thusly:

The workhouse bell would be rung at 6am in the late spring and summer months, adjusted to 7am for the period between 29th September and 25th of March. All inmates were expected to rise punctually and await the arrival of their master or matron, who would preside over a roll call half an hour after the ringing of the bell.

After a communal prayer, half an hour would be allowed for breakfast - normally stale bread, gruel or porridge - although no consensus or regulation existed as to what constituted nutritional portion sizes.

Accordingly, masters could spare overhead expenses and stretch or dilute the dwindling food reserves at their own discretion.

Inmates went immediately to work after eating. Young girls under 15 might be called upon to assist the matron in the infirmary, but all residents over the age of 15 could expect to partake in backbreaking physical labour. Those who refused or were seen to slack in their work would forfeit their next meal, or face a graver punishment depending on the whims of their overseer.

In the summertime, it was not unheard of for work to resume so long as it remained light outside. Although breaks would be granted for lunch and supper, the state sanctioned rules were insistent that ‘silence, order and decorum shall be maintained’.

One hour would be granted for recreation, although smoking, consumption of alcohol, and playing cards were forbidden. Inmates were required to go to bed at 8pm, before rising in the morning to repeat the grinding routine yet again.

Only Sundays, Good Friday and Christmas Day, when inmates were allowed a day off, offered any reprieve from the exhausting cycle of regimented hard toil - although there were still compulsory ‘Divine Services’ to attend.

Between 1848 and 1850, as famine continued to ravage the island of Ireland, some 4,100 young Irish women volunteered to emigrate from workhouses all over Ireland to the colonies of New South Wales and South Australia - simultaneous with the much more famous exodus of Irish migrants to North America.

The most notorious of the so-called ‘Orphan Ships’ that transported the girls to Australia, the ‘Earl Grey,’ set sail in 1848. It carried young female inmates from the Belfast, Dungannon, Armagh, Banbridge and Antrim workhouses to Sydney.

Margaret and Ann Jane Best were among her passengers, having left the Antrim workhouse on May 26th, 1848. Margaret was 19 upon arrival in Sydney, and her younger sister - described once again upon disembarkation as ‘dirty’ - was aged 17.

Both sisters settled and married not long after arriving in Australia, residing there for the rest of their lives. It is believed the two orphaned sisters remained in close contact for most of their remaining days, their bond having been strengthened by the mutual privations they suffered together at the Antrim workhouse.

By the end of the 19th century, workhouses had largely transformed from the severe disciplinarian establishments they had once been and instead predominantly served as refuges for the sick, elderly and dying.

In 1917, Antrim’s workhouse finally closed, its inmates boarded out to the institution in Ballymena.

Workhouses were formally abolished by law in 1930, although some continued to operate under different appellations as late as 1948.

The premises of the Antrim workhouse were converted, becoming Massereene District Hospital in 1921.

It continued to be used in this capacity until the hospital’s closure in 1995.

Much of the building was bulldozed in 2003 to make way for the imminent development of the Tesco supermarket, and only the entrance block and fever hospital remain intact today.

And yet, in spite of the historical loss represented by the destruction of vast swathes of the workhouse building, the essence of the desperate toil, the bitter tears and the pouring sweat that once soaked the land there will be much harder to erase.

A tangible link to the past may have been traded for a seemingly innocuous supermarket car park, but the lingering memories of those years of hardship still permeate the ground.