Fifty years in the line of fire 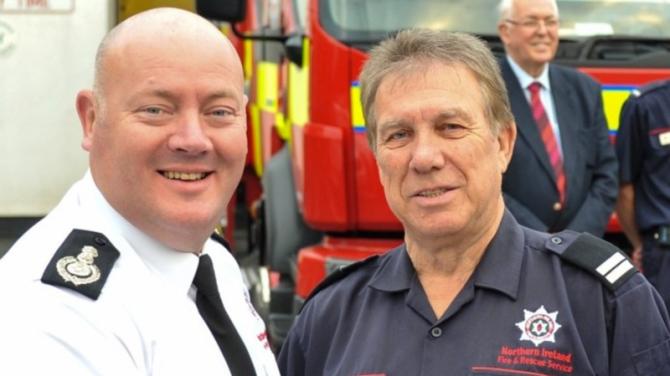 SEPTEMBER 2013 marked a hugely significant milestone for the longest serving member of the Northern Ireland Fire and Rescue Service.

Antrim man Ronnie Nicholl had no clear career plan mapped out for himself when he left school, but his life changed forever on August 29 1963 when he decided to join the Fire Brigade.

The 18-year-old intended to stick at it for a year or two, but soon he had caught the fire bug - and any plans of doing anything else went up in smoke.

Time flashed by and before he knew it, Ronnie was accepting a medal for 20 years of service. Then another - and another.

Seven-years-ago he had celebrated an incredible 50 years in the hot seat - an unparalleled achievement in Northern Ireland.

And speaking to the Antrim Guardian at a special council reception to mark the record, the man who had spent half a century in the line of fire confirmed that he had no plans to retire.

It was an incredible achievement by any standard, yet Ronnie remained typically modest about his towering achievement - one that is unlikely to be bettered.

And it is all the more outstanding given the tumultuous times he worked through.

Keeping the people of Antrim safe in their beds would be a challenging enough watch, but during the dark days of the Troubles local firefighters were also called upon to attend the aftermath of the sectarian horrors on the streets of Belfast.

The tight-knit team in Antrim may have been part-timers, but make no mistake this was a full-time commitment. At one point they were dealing with over 1,300 call-outs a year - a figure which put them in the top three ‘hot spots’ in the province alongside Carrick and Newtownards.

Nevertheless, Ronnie still found himself with some time on his hands so almost a decade after becoming a fireman he enlisted with the Fire Service at Belfast International Airport. That was in 1972, and he went on to serve at Aldergrove for 33 ‘happy years’.

And that was a constant theme with Ronnie - the work may have been hard, the pressure off the scale, but beneath it all he just loved the job.

“I always have. Perhaps that’s why I’ve stuck at it for so long!” he told the Antrim Guardian back in 2013.

“I’ve met so many wonderful people down the years. I suppose you could say I’ve been very lucky.

“It’s a rewarding job, but at the end of the day it’s all about the people.”

Given the course of his half century, Ronnie met thousands of people - many when they were at their lowest ebb.

“When I look back I tend to think of the good times, but there have been many dark moments,” he added.

“I’ve seen the aftermath of the bombs, of devastating house fires, of car smashes - and, of course, I’ve seen lives lost.

“You can’t dwell upon it, but it is an unavoidable part of the job.

“You wouldn’t be human if it didn’t affect you, but you have to put that to one side and get on with it.

“We go in there as a team and everyone has a role to play, so if anyone freezes things grind to a halt.”

Over the years that cool head and those nerves of steel were tested on many occasions.

“Every fire is different, but there are some that stick in your mind. I can vividly remember the bombing of Hall’s Hotel in Antrim, for example, and the night that the Protestant Hall burned.

“More recently, I remember the challenges of tackling the massive blaze at Camden. There were also a few hairy moments when an oil tank exploded at Brantwood and the fire spread to five properties. There was a similar one at Neillsbrook three or four years ago.

“Fire is so unpredictable so when it’s on the move in a built up area you have to act fast and decisively.

“Thankfully the training paid off in all those occasions and no-one was seriously hurt.”

By the time of the anniversary Ronnie, as Watch Commander, left the physical fighting of the fires to the 20-strong team of firefighters - but he had lost none of his spark.

“It’s a different sort of job now. The sirens have made way for pagers. Things have moved on.

“One thing has not changed, though - the adrenalin. I still get that buzz when a call comes in. I suppose if that ever left me that would be the time to go.”

Though he lost his wife Eileen back in 2007, Ronnie believes the support he had received from his family down the years had helped him deal with the stresses of life in the front line.

“Ask any firefighter and they will say the same - it’s your family that helps you suck up the pressure and move on after a tough shift.

“I’ve been blessed with four lovely daughters and they have been my rock. The love and support I have received from my family means the world to me.”

He added: “This is a way of life to me. The past 50 years have gone by in a flash. How many have I got left? Who knows. But while I’m still fit I hope to play my part.

“We are now very much a Rescue Service, so a lot of our time has been spent going out and meeting the public and visiting schools. Prevention is now the focus, and I enjoy spreading that message - hopefully for some time to come.”

Then Mayor Roderick Swann said Ronnie had touched many lives during his record-breaking service.

“He is an Antrim man born and bred and he has given his life to helping others,” he said.

“Fifty years is a long time. That’s true dedication. The whole community owes him a huge debt of thanks.”

Alderman Drew Ritchie described him as a ‘true local hero’.

“Fifty years is a remarkable period of service, particularly in such a high pressure environment. He has worked tirelessly for this community and that tells us a lot about his caring attitude and concern for public safety.

“The Antrim community can be grateful his skills in saving many lives and properties throughout the years.”

Chris Kerr, who in 2013 was Chief Fire Officer with the Northern Ireland Fire and Rescue Service added to the rousing chorus of commendation.

“Ronnie’s 50 year service is a fantastic achievement and he has certainly witnessed many changes and developments within the organisation over those years,” he said.

“He should be very proud of his 50 year service and, on behalf of all his colleagues in NIFRS, we wish him well for many more years to come.”

Warm tributes indeed for a man driven by one burning ambition - to keep people safe in their darkest hour.