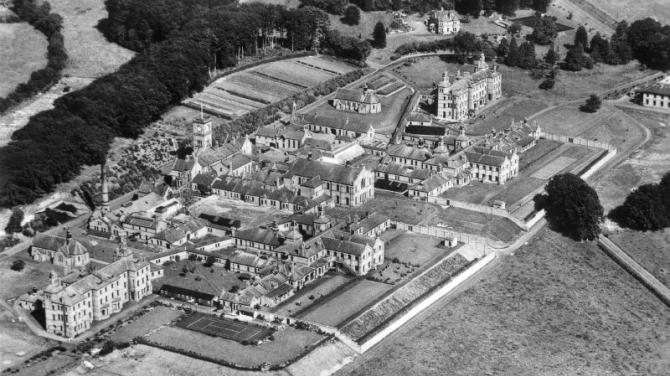 IT’S a well known local landmark - but how much do we know about the origins and long history behind the place we call Holywell Hospital?

The facility is situated on high ground two miles north of the town on the Steeple Road.

According to the Antrim and District Historical Society, in 1891 the Holywell site of 100 acres was selected as the location for a County Antrim Lunatic Asylum.

Built primarily to alleviate serious overcrowding at the Belfast Asylum it provided a separate asylum for Country Antrim and was opened in 1898.

One of the last large asylums built by the Victorians, it was designed by the renowned architect John Lanyon.

The building of the vast hospital did not go smoothly, with the Board of Governors and Lanyon, who died in 1900, in frequent dispute with the contractors over costs and missed deadlines.

The hospital’s prominent features include the Clock Tower and the gargoyles at the front entrance.

The Clock Tower was lit at night and used by boaters on Lough Neagh as a guide to the mouth of the Six Mile Water.

A fire in 1930 destroyed a large section of the hospital. Later, during the Second World War, the American troops were stationed in the grounds.

Holywell Hospital continues to treat the mentally ill and its long history charts the developments in psychiatric care over the past 110 years.

Local author Michael Sheane points out that since the facility was opened as an asylum in 1898, there have been great changes in the treatment of mental illness and the way it is viewed in society.

In the past Holywell was often overcrowded and underfunded.

There were epidemics of infectious diseases and, in 1930, a devastating fire.

Then particularly under Dr Boyd's leadership, great efforts were made to inject energy into the social life of patients and staff, and to make the hospital an increasingly pleasant place to be.

Instead of being restrained and forgotten, said Mr Sheane, clients are now given hope and are rightly able to feel they are a valued part of society.

One of Holywell’s most well known residents was Iain Hay Gordon, held there for seven years for a murder he didn’t commit.

The young Scotsman was found ‘guilty but insane’ after the murder of judge’s daughter Patricia Curran, who was found just off the drive to her family home at The Glen in Whiteabbey in 1952.

It is telling that during his seven-year stay in Antrim he received no treatment for his imaginary condition.

During that time it became abundantly clear that the man before them was perfectly sane, and over time he was given more responsibility working in the hospital grounds. Hew was even known to ride into Antrim on a bike to run errands.

Many of the staff believed that he had been framed.

In 1960 the day Iain Hay Gordon had been patiently waiting for finally arrived when he was released on the orders of Brian Faulkner.

He was sent home to Scotland to be with his mother, under an assumed name and passed away in 2012.

But long before the building of the hospital, the land on which it stands now was farm land and the townland of Holy Well - as explained by local historian Stephen McCracken.

According to the Ordnance Survey memoirs of 1835: “In the townland of Holy Well near the centre of the parish, north of Antrim and a little to the left of the of the road leading to Connor, is a spring well situated in a gravelly hill and 115 feet above the sea.

“The well is about 6 feet deep and the water is of an agreeable flavour, in no respect differing in flavour from drinking water, but said to possess some tonic strengthening powers.”

“It is more probable that’s its properties are imaginary and founded only on tradition, as it is known by the name of Holy Well and seems to be somewhat connected with the round tower which is five and a half furlongs south of it: and there is also a tradition that charms or miracles were wrought at it.”

Stephen has been investigating what has become of the spring - which is also likely to have influenced the name of the Springfarm townland.

“The well is situated in the tree line of the field in front of Antrim`s new council buildings, closest to Holywell Hospital,” he said.

“The well is capped off with a small bricked building probably constructed when the hospital went up.

“It supplied water to tanks under Holywell Hospital’s chapels for their general use and are now no longer in operation.

Etched on a tree next to the Well are the letters USA, most probably from a serviceman who stayed at the old Springfarm house and barracks, only a few hundred yards down the field.

“No servicemen stayed on the grounds of Holwell Hospital,” he said.

“Although they did put up Nissan huts in the late 60s to provide additional accommodation.

“The Springfarm site was home first to Dutch Soldiers, then the United States took it over.

“It then was home to hundreds of German prisoners of war up until 1947.

“The old trees around the old Springfarm path which was the original Springfarm road used to be littered with trees etched with the names of these US service men.”