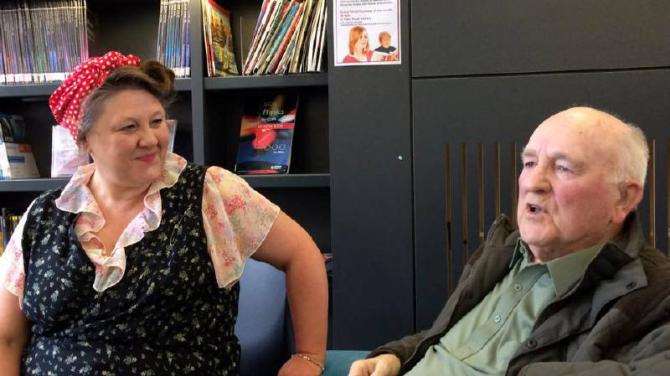 HE’s 89-years-old and has survived war and evacuation - so the small matter of a global pandemic and local lockdowns are not going to get in the way of Jim Delaney’s social life.

We first wrote about the inspirational pensioner back in 2015.

But now he has reached a whole new audience thanks to modern technology.

Before lockdown, whenever he was able, Jim travelled from his home in Crumlin to attend the weekly Saturday ‘session’ at Ballyeamon Barn Tourist Hostel near Cushendall.

There he would sing and tell stories alongside entertainers from all over Northern Ireland.

Then coronavirus struck and the sessions moved online.

Not one to be kept down, Jim’s family sorted him out with a microphone and a link to the video-conferencing application Zoom - and his beautiful tenor voice is now being heard and enjoyed by people from 12 countries all over the world who are tuning into the sessions each week.

Five years ago he told us about how he was evacuated to his grandparents’ farm near Crumlin back in 1940.

Jim had already spent one day a week at the farm in Derryash, near Aghalee, bringing home eggs, butter and sometimes even a chicken to his family on the Grosvenor Road.

While the farm originally belonged to his father's family, by the late 1930s, the house lay empty and Mr Delaney senior kindly offered it to his in-laws, the Reas.

Jim said that he still recalls his mother shooing him into the house in September 1939, telling him: “A big war has started and they will drop bombs on us.”

Voluntary evacuation started later that year and Jim was sent back to the family farm in the country.

“I had two younger sisters and a younger brother and three older brothers and two older sisters,” recalled Jim.

Jim was duly dispatched back to Sam and Margaret Rea.

“My grandfather was a boilerman at Harland and Wolff, he worked on the Titanic,” he said.

“When I was living in Belfast you could hear the trains shunting, you could hear doors opening and shutting, people whistling -- but all that ceased when I lived in the country.

“Instead there were cows roaring, dogs barking, and donkeys braying.

“There was mossland and they used the donkeys as they were lighter than the horses.

“We wanted for nothing, we had lettuce, scallions, potatoes and all the eggs we could eat.”

But he wasn't the only one living the high life despite the rationing.

“My brother worked for the Americans at Langford Lodge and he got the same as what they did.

“He got what they called ‘candy’ and what we called sweets, as well as cigarettes and cooked ham, which we had never seen before.

“He also got my favourite - powdered eggs!"

In April 1941, Jim recalls a sight that has remained with him to this day.

“Across from our farm there was a lady who lived down a lane and she had a well which we could draw water from.

“It was around Easter time as I remember around that time, my grandmother had collected whin bush flowers from the moss to dye the eggs with.

“It was night time and the woman came running down to the house and said 'come up my lane, quick!'

“We came over and there was a wall and we all looked over and saw lights flashing in the distance and we knew there had been a big raid in Belfast.

“We stood and watched for about 15 minutes and then we went across the road and went to bed.”

But three hours later there was another shock in store.

“There was a din and we woke up and came downstairs and there was my uncle and my younger sisters and my uncle’s family, and he was still in his pyjamas,” said Jim.

“He said ‘Belfast is wrecked’.

“He told us they had been picked up by an Army truck.

“I had a good big room and a big bed but after that night, that was the last time I was on my own for the rest of the war.”

Jim’s father arrived the next day on a bicycle.

“It was only 20 miles away from Belfast.

“Over the next few days a weeks he went around and spoke to all the local people and got housing sorted out for the family.”

Because of the sudden population explosion in the rural area, there was a big impact on the local school.

“There had been five pupils in the school to begin with and suddenly there were 150 children and the school couldn't hold them.” said Jim.

“They put the local children in a class from 9am-1pm and the city children from 1pm-4pm.

“When our class came out and the others went in, we would sing ‘Belfast men brave and true, flew like hell when the sirens blew’”

He added that education in the country and the city differed hugely.

“Education in Belfast was way ahead,” he recalled.

“The schooling in the country was all around farming. There was nothing about square roots and commas and dots!

“I remember Miss Gillen from the school, and when the Belfast ones came up, they had a teacher with them called Mr Moore.

“The school itself at Rankinstown was only demolished a few years ago.”

Jim said he went back Belfast a month later survey the damage used by The Blitz.

“My father took me and I remember going to Percy Street up towards the Shankill and it looked like Nepal did after the big earthquake.

“He showed me an air raid shelter and said a whole load of people in the shelter had died.

“Every now and in you would see a street where there would someone on guard, a policeman or the Territorial Army or a soldier and there would a big notice saying that there was an unexploded bomb.

“There was a lot of despair in Belfast but there were good things that came out of it too.

“On every green space they turned it into plots for the people to grow vegetables.

“Every night the streets came alive with people and they all headed into the hills at Hannahstown or to Milltown or Belfast cemeteries and they stayed there all night, there were prayer meetings in the streets because people were scared of more bombs.”

And there was no rest for the older members of the family.

“My grandfather, who had worked for Harland & Wolff, was sent for in 1944 and he went back to Belfast to work in the shipyard until the end of the war and my older brother came to took care of us until 1945.

“I would have stayed on at the farm, only my mother sent for me and brought me home.

“When I was 16 there were jobs available at the mills, for message boys, so I had to go back to Belfast, but I knew I would come back.”

Jim said that some of his fondest memories of his childhood were fishing for eels and pike in the drains and listening out for the bread van.

“In Belfast the bread van came around every morning at 6am,” he said.

“But in the country the man came twice a week, on Mondays and Thursdays.

“He blew a whistle and you could hear him from miles away, and hear the big wheels of the cart turning on the country lane, I always looked forward to it because he always gave me a bun! It was lovely brown bread.

“We cut the turf from the moss, it was mud turf, so we dug it up and flattened it and separated it by hand, I loved it.

“Because my grandfather was a boiler maker, he could make all sorts of things. He made rat traps and before there were toasters, he even made a contraption where we could put three bits of bread on to toast on the open fire instead of doing one at a time with a fork, as at that time we had no electricity and no running water.

As well as rural past times, Jim also found time to go to the picture house.

“I was cowboy mad, I loved Gene Autry!” he said.

“Each of the four cinemas I went to had a different shop selling different things, I loved the boiled sweets like clove rock and Everton mints.

“When I was on the farm I would have ridden the horse back from cutting the hay but I never galloped or jumped fences like the cowboys.”

Jim eventually went into the world of work, becoming a lorry driver and travelling all over Ireland and his hobbies include music and singing, for which he is renowned.

He met his late wife Mary, from Fermanagh, at a dance and they went on to have two sons and a daughter, who he lives with now.

“All the lads from the country, from Derry and Fermanagh and Tyrone and even as far as Monaghan, came up to work in Belfast and they all became barmen,” he recalls.

“They started a football club called The Barmen and they ran a dance to keep it going and it was referred to as The Barmen's.

“A man from work told me to come on down and that I'd enjoy myself.

“I went to it for two whole years and I never danced - I never could dance!

“But that's where I met Mary, she was from Roslea, where I lived for while.”

And despite the farm passing out of family ownership, Jim still likes to call by.

“On a nice day I will go out for a sail and sit in the car and take my binoculars and look over the moss.

“Sometimes I will see a hare or look at the birds. I am happy when I am there.”