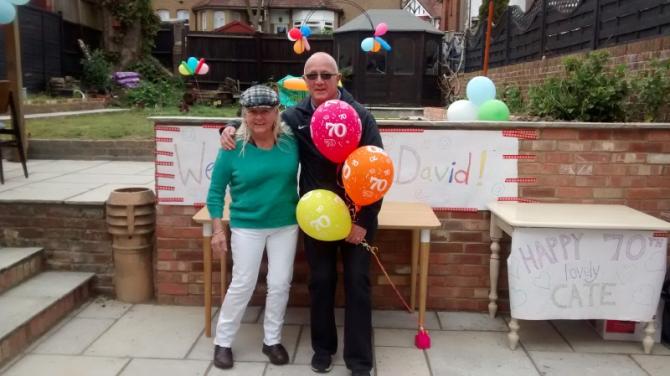 BACK in 2017, the Antrim Guardian helped reunite David Martin with the Antrim family he never knew existed.

And now he is celebrating yet again after the research sparked by meeting with his Northern Ireland relatives revealed that he also had a sister living in England.

Three years ago in May past, David took what he thought was his last shot at finding any living relations.

He wrote to the paper, appealing for help and explained that his greatest ambition would be to shake the hand of a family member.

He understood that his mother’s maiden name was Allen and that she came from the Menin Road area of Antrim.

She was believed to have remarried in England after his birth, when she was in her late 20s.

His real father was thought to be Irish but was not named on the birth certificate.

David, who is now in his late 60s, said at the time: “It was by luck that I tracked down my adoption papers back in 2005 when I contacted the Catholic Children’s Society

“My mother was seen by an officer of the Southwark Catholic Rescue Society in 1952.

“My mother informed the Society she was not in a financial position to care for the child.

“My mother had married since the birth of the infant, not my father, and she and her husband had given their attested consents to the adoption.

“I was placed with the Catholic Children’s Society in March 1952.

“I have been given some letters by my mother and they are really rather moving, he said.

“I have all but given up hope after all these years, I thought I had run out of steam, but I am asking anyone in Antrim with any information to please get in contact.”

After a few false starts with potential adopters and foster homes, David who is now known as David Ralph Martin was eventually taken under the wing of his adoptive father, a man of Italian extraction who lived on Buckingham Palace Road in London and ran a Catholic travel agency to pilgrimage and prayer sites.

“I was very lucky. I had a great education and a great life and I travelled all over, to Lourdes and Rome, although I was a bit of a wild child in the 1960s!” he admitted.

“My father was very good to me, he was a wonderful man, and it was very unusual for a single man to be allowed to adopt a child although his business background probably had some sort of sway.

“The house I grew up in was huge and just down the road from Buckingham Palace.

“All my life I had questions and I was just told to forget about it and move on with my life, but I still want to know what family I might have left.”

The Antrim Guardian had placed David’s appeal on the front page and also put him in contact with local historian and sacristan at St Comgall’s Church, Brendan Smyth, who started making enquiries on the ground in Antrim.

Within 48 hours of the newspaper hitting the stands on June 13 2017, David was in contact with one of his cousins, Gerry Allen.

And just months later, he was warmly welcomed into the fold by a whole room full of relatives that he never knew existed.

Stepping off the plane onto the tarmac at Aldergrove, that August, David said he felt like he had ‘come home’.

“Without sounding disrespectful to the Pope, I felt like kneeling down and kissing the ground,” he admitted.

Brendan Smyth, who has known the Allen family his whole life, was waiting at the airport to meet David.

“I had a board with me, with ‘David Martin’ written on it,” he said.

“But when I saw this man walking out of arrivals, I put the board down, because I knew that’s an Allen!”

Amid emotional scenes, David walked into St Comgall’s parish centre to a huge round of applause and shook Gerry’s hand, ‘completing the circle’ as he described it. Then came the bear hug.

And there to see it all were his own son and his wife, who now live in Galway and had driven up to witness the reunion.

Indeed in another startling coincidence, David learned that one of his cousins lives just ten minutes from his home in Newcastle.

Brendan had supplied a family tree for perusal, and across the yard, in a real show of community and family spirit from the parish team, members of the youth Club, organised by Paddy McLaverty, were working hard in the kitchen to prepare a specially-arranged buffet.

Following this, his aunt Teresa pressed a copy of a photograph of Mary into his hand - the first time David had ever seen a picture of his mother.

From there, David was introduced to a long line of aunts, uncles, cousins, nephews and nieces.

Mary was one of 14 children born to Dan and Sarah Elizabeth Allen, living in a small bungalow on Menin Road.

The houses were originally built to accommodate soldiers returning from the Great War. Indeed, two of Mary’s brothers, John and Tommy, eventually lost their lives during World War 2.

Mary herself had gone to London to seek her fortune - and David got to visit the old family home, the church where his mother was baptised and the very station from which she would have disembarked her old life.

We caught up with David this week, when he revealed that from the information given to him by his Antrim family, he was able to go on and track down a sister.

Catherine lives in Hastings and David met her for the first time the day before her 70th birthday.

He was then invited to join her and yet another branch of his newly-found family at her big party the next day.

**See the Antrim Guardian next week for what happened when David met Cate and what’s happened since the emotional 2017 reunion.