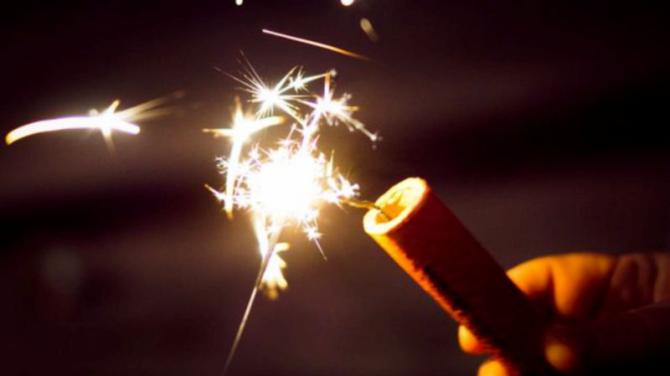 YOUNG people have been warned to bin illegal fireworks after one teenager took a seizure and another suffered a broken leg after the items were thrown indiscriminately in Antrim.

For weeks now, the nightly nuisance of the banger blitz has been heard all over the town.

But in the past few days, the situation has taken a sinister turn, with youngsters placing fireworks in bottles, bins, down entries and underneath cars.

A particular problem area has been identified at the tunnel near the Parkhall/Antrim Grammar schools complex as well as the Parkhall estate itself, while complaints are also coming from other areas of the town and even in the Castle Gardens while young families were enjoying walks in the weekend sunshine.

One local woman revealed that her son had come under fire.

“Myself, son and his friend were coming home from school and as a result of a banger being thrown into the tunnel, my son suffered an epileptic seizure.

“Thankfully we had chosen to go over the tunnel.”

Another worried mother said: “My son jumped to get away from a firework and ended up with a broken leg and is now in plaster for 6-8 weeks.”

Very young children have also reportedly been left terrified by the situation, particularly in public parks, while pets have also been left in extreme distress.

Teachers are said to have stepped up patrols around a number of schools in the morning and at home times, while the PSNI has also promised action after being notified of the situation.

UUP concillor Leah Smyth said that abuse of fireworks is a serious issue around the town at present.

“I was made aware of fireworks being let off by young ones on the way home from school over a couple of days last week, which did result in injury.” she said.

“I have spoken to police who have been down round the schools last week and are continuing to work on this.

“Over the weekend, I heard reports of fireworks being let off by young ones in and around housing estates in the afternoon.

“Fireworks were being let off near cars and in wheelie bins.

“It is so dangerous.

“Many people would also have their much loved pets in the garden during that time of day and a lot of animals are petrified.

“I’ve heard tragic stories in the past of this.”

Councillor Smyth has urged parents to have a chat with their kids and for them to stress that fireworks are not toys.

“They should be let off somewhere safe and by someone who holds a valid licence to do so.” she said.

“We still have a few weeks to go before Halloween and I worry that this may become an increasing problem.

“It needs to stop now before someone gets seriously, seriously hurt.”

A spokesperson for Antrim and Newtownabbey PSNI said that it was important to remember fireworks are made from explosive material and, if misused, can cause serious and life changing injuries.

“The law clearly states that fireworks - except indoor fireworks and sparklers - must be bought from reputable, licensed dealers who are required to keep sales records.” they said in a statement.

“Fireworks bought from other sources may not be British Standard approved thus presenting an even bigger risk of injury. It is also illegal to possess, sell, handle or use fireworks if you do not have a licence.

“If you are aware of anywhere that is selling illegal fireworks I would urge you to contact us on 101 to report this as not only are they profiteering from this illegal activity but also putting people in our community at risk by selling such goods.

“Officers are working in partnership with local community representatives and agencies to address these ongoing issues.

“We will be stepping up patrols in these areas and anywhere else in the District where antisocial behaviour is an issue.

“We would continue to appeal to parents and guardians to speak with young people to know where they are going and who they are with.

“Young people must understand the dangers of getting involved in behaviour which could result in injuring themselves, others or ultimately gaining a criminal record.

“Over the weekend we have taken a number of calls in relation to anti social behaviour with fireworks involved.”