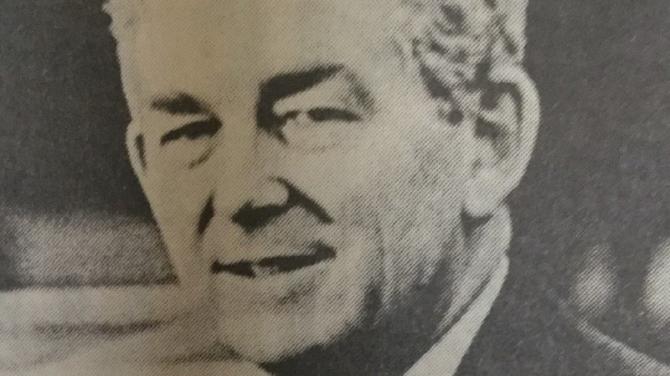 CHATTING to Princess Diana at a Buckingham Palace garden party and to President Bill Clinton at the White House - Sam Magee’s career as Chief Executive of Antrim Borough Council certainly led him to have many fascinating encounters.

The man who started his first job in Local Government on April Fool’s Day 60-years-ago travelled the world on behalf of his adopted Borough - and he enjoyed many successes along the way.

Back in 2004 as he prepared to leave the post he had made his own he took time to speak to the Antrim Guardian and reflect on that remarkable journey,

There was palpable shock in the chamber when he had announced his intention to stand down to spend more time with his family and parents. After 32 years in the top job he was part of the furniture - in the very best way,

He grew up on a farm in Hillsborough and it was a tie in his life he looked back on fondly.

“I found my experience of working on a farm gave me an excellent insight to the efforts and requirements of many of the people throughout the rural and district council area,” he said.

“I found I was able to converse very openly with them as I understood much of the language being spoken and the demands made.

“I am proud of my background, my farming experience with my parents.

“The farm we had wasn’t of sufficient size to sustain my parents, myself, my sister and brother to be working at home and it was a question of my parents working the farm and their offspring throwing their shoulders to the wheel to assist.

“I often give thanks for the support and encouragement which I have received from my parents, my brother and my sister over my 44 years in local government.”

Mr Magee took up a post as Junior Clerk in 1960 with the former Lisburn Rural Council and went on to gain experience in a variety of departments, including finance, administration and housing.

Although he was paid just £210 per annum when he started, he thoroughly enjoyed the work and his rise proved to be rapid.

“Within a short period of time in the mid 1960s I realised that if I was to show total dedication to the job there was a good career open to me in local government.

“As many people would have stated at that time, a job in local government was always a guaranteed job with much less risk of redundancy as in industry or commercial life.

“I also went through studies related to local government - all done through night time study.

“Indeed, for three years it was three nights a week at Belfast Technical College.

“Success on the academic side was of obvious benefit to me, not only in progressing my career but also in my ability to administer.”

Mr Magee made the move to Antrim in 1971 to take up the post of Deputy Clerk.

And his arrival came at an extremely exciting time for the Borough with the explosion in population, industry and infrastructure.

“Through its development as a New Town under the 1965 New Towns Act a lot of infrastructure was being provided.

“There was an influx of people into Antrim from all parts of Northern Ireland due to Enkalon and the expanding industry of man-made fibres.

“Housing development in the public sector was expanding rapidly.

“The former Housing Trust, Antrim and Ballymena Development Commissions and the Rural Council had the responsibility of providing public authority housing and Antrim expanded in that sector at a rate of 700 to 800 houses per year.

“One can only imagine the infrastructure required for that in terms of roads, schools, recreation provision and other services.

“I found it most interesting and a wonderful challenge in developing a career in local government.

“It was also a challenge for elected representatives in the Rural Council and Antrim District Council following local government reorganisation in 1973.”

But Antrim was more than ready for the many hurdles that lay ahead.

“Antrim Council met this with total enthusiasm and was one of the most forward thinking local authorities in Northern Ireland.

“This can be illustrated using the example of the Antrim Forum development. This was virtually unheard of in Northern Ireland and it would have been a facility only sparsely provided in mainland UK.

“Antrim Council officials travelled throughout England, Scotland, Wales and on the continent to survey what would be best with such provision.

“The Antrim Forum was provided and its total cost, including furnishing, was £570,000, 65 per cent of which was given by a Department of Education Sports Development grant.”

After just 18 months working in Antrim, Sam was promoted to the top job.

“My boss at the time, Mr Billy Sinnerton, resigned from the council in 1972 to take up a major appointment with the Department of Commerce in Central Government.

“I was fortunate to be appointed Chief Officer in 1972 and in 1973 was appointed Chief Executive of the newly formed Antrim District Council. This was done through public competition.”

It was a fortuitous decision, and one that was later underlined when Sam received the MBE for his services to local government.

Down the years challenge after challenge was met with a steel determination and a burning desire to do his best for the ratepayers.

One of the biggest emerged in the early 1980s when the demise of Enkalon shook the Borough to its core.

“This meant going out, working through the Department of Commerce and Industry, travelling to many parts of the UK and also on the continent.

“Perhaps the highlight of my travels with the Mayor and other councillors was our visit to South Korea to finalise the contract for Daewoo to come to Antrim - that was an experience I will never forget.

“It was hard work but it opened my eyes to the new culture which I was witnessing and gave me an excellent understanding of how dedicated other countries could be to improving work ethics and encouraging employees to respect work places.

“This was in extreme evidence around Seoul and several parts south of Seoul where the multi-discipline industry of Daewoo was the fourth largest employer in the country with the provision of VCR and high tech equipment through to ship building.

“I spent 10 days in Korea at that time and travelled on to Tokyo making further efforts to encourage inward investment.”

Another trip, which results in ‘much disappointment’ was to the west coast of America where council reps were agonisingly close to securing a massive investment boost for the borough.

Several high powered meetings were held in an attempt to seal the deal with the Hyster company.

“Much disappointment resulted from that particular visit as we were within 24 hours of signing a multi-million pound investment for Antrim, only to be told at a breakfast meeting one morning that the company had been offered a virtual open cheque to invest north of Dublin.

“The Mayor, Jack Allen, and myself returned to Antrim having to convey the most disappointing news to our council.

But it was not all boardrooms and top level talks. The outgoing Chief Executive had many happy memories of meeting royalty and other VIPs.

“I could safely say I have met all members of the present Royal household including the late Princess Diana at a Buckingham Palace Garden Part only three years before her death.

“Most of the royal visits were by way of protocol attendance by our Mayor and myself but nevertheless it was a pleasant duty to perform and my wife always quietly welcomed the opportunity to shake hands and admire the clothing styles!

“I did find it interesting, but at times slightly nerve-wracking.

“I personally had to give a 15-minute address on inward investment and European funding to former Prime Minister John Major and his senior aides at 10 Downing Street.

“Later that year I travelled with our Mayor, Councillor Edgar Wallace, accompanied by Councillor Donovan McClelland and Mr Philip Lucas to Washington DC to attend the worldwide conference on local government called by President Clinton.

“The focus of the conference was on peace and reconciliation.

“Councillor Wallace and myself were elated to find ourselves in the presence of the President and his wife Hillary in their residence at the White House when we had the opportunity to speak to them personally.

“I have to thank local government and Antrim Borough Council in particular for opening up such opportunities for me.

“This was not through any special gift I brought to local government but more me being in the right place at the right time.”

But as he prepared to leave, Mr Magee admitted there were some regrets. And top of the list was the lack of town centre development. Almost 20 years on little has changed.

“We suffered many frustrations, the main one being no progress on Ulster Bar Corner. But I don’t wish to sound totally negative.

But at the time of the interview there were some ‘exciting’ news in the pipeline - including Junction One, a new hotel, a ‘major’ food store, the long-delayed civic offices and on-slips to the Area Hospital, a facility Mr Magee had tirelessly campaigned for.

He revealed that he had no plans was he intended to do next after closing that office door for the last time.

“Many suspect I have other occupations up my sleeve but I can speak quite opening and say this is not the case,” he said.

“I will take a little time to relax and adjust myself to coping with what has not only been a job of work but in many ways a hobby for me.

“I often say isn’t it great for the likes of Darren Clarke to have a job of work playing golf - my hobby and work was local government.

“I will miss many aspects of it, particularly having the authority to do positive things which were to meet the varying demands of ratepayers and those who visited our borough.

“My departure also opens up the opportunities for change and other aspects of new strategy which can be examined by the council and be laid by my successor, Mr David McCammick who I wish every success in the post.”

He also paid warm tribute to the elected reps he had worked with down the years.

“They were my political masters but I always felt I was treated in a fair and honest manner by all.

“I pay special thanks and respect to the Mayors and Deputy Mayors who occupied these positions down the years.

“The late Mr Jack Allen OBE was one of the most forward thinking and forceful elected representatives I have ever known and much of the success in Antrim can have his name linked to it.”

And then there was the team at the Steeple.

“Each and every one has treated me with total respect. Not one ever refused to respond to my demands and it was never necessary to adopt the role of a dictator over the many years!

“I found that by leading people to work for you was a much better policy than dictating and pushing people against their wills.

“To all I say thank you for your excellent support and I ask all to remain my friends in my days of retirement.”

Undoubtedly many have. With his old school manners and pioneering spirit, this gentleman council chief certainly left an indelible mark during a truly remarkable career.