Why was Aldergrove marked on Hitler henchman's map at the height of WW2? 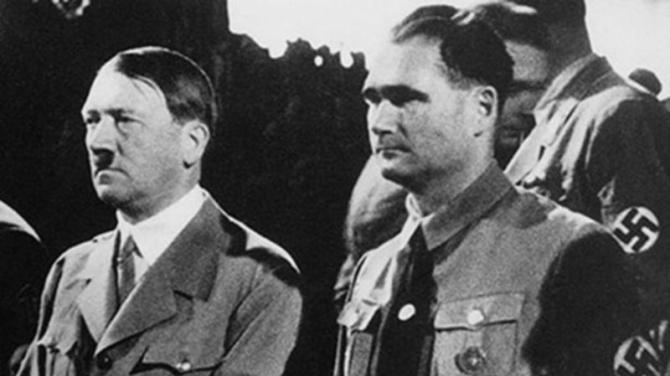 ON the evening of May 10th 1941 a pair of RAF Hurricane fighter planes were dispatched from the Aldergrove airfield.

Their Czech pilots, Captains Vaclav Bauman Leopold Srom, had been scrambled to intercept a lone German aircraft that had just flown past Glasgow - yet, ‘under no condition’ their orders stipulated, were they to ‘shoot at it’.

In one of the Second World War’s most bizarre episodes, Deputy Führer Rudolf Hess staged a one-man trip to Britain in a Messerschmitt Bf 110 modified, to his own specifications, for long range flight.

Official histories posit that he was acting unauthorised and alone.

With Germany set to launch its invasion of the Soviet Union, Hess was concerned about the prospect of waging total war on two fronts. As such, his intended objective was simple - to broker a peace deal with Britain.

At the very least, a peace deal would mean that Germany could unleash its full concentrated military might upon the Eastern Front and, in the best-case scenario, Britain might be persuaded to fight against Stalin on Germany’s side.

In the final night of the Blitz, 571 German bombers, some flying multiple sorties, dropped 711 tonnes of high explosives upon the beleaguered city. 86,173 incendiary bombs also plummeted into London’s buildings, lending more firepower to the punishing barrage.

The resultant fires destroyed about 700 acres of the city, around double the damage caused by the Great Fire of London. Some 1,436 people were killed, and London was shattered. It was the greatest raid yet inflicted on the city.

Hess, experiencing difficulties in navigating in the night, overshot and reached the far side of the Scottish coast. He turned his plane around again to attempt a second landing in the vicinity of Glasgow, whereupon Bauman and Srom, lacking the fuel to engage in a long-range pursuit, were ordered to ‘stop action and return’ their Hurricanes back to Aldergrove.

The rest is history. Hess, running low on fuel himself, brought his Messerschmitt into a steep climb before bailing out, descending by parachute into the countryside not far from Floors Farm, Eaglesham.

There, he was discovered by a ploughman named David McClean who summoned the local Home Guard unit. The Führer’s deputy was placed into custody, and sat out the rest of the war - and, indeed, his life - in prison.

Adolf Hitler was incensed. Suspecting treason, he contacted Benito Mussolini to assure him that Germany had no desire to seek a separate peace with Britain, dissolving the position of deputy Führer for good measure.

German news outlets were advised to depict Hess as a deluded rogue madman and Hitler secretly ordered for him to be shot on sight if ever he returned to Germany.

However, the background to Rudolf Hess’ bid for peace - not to mention the circumstances surrounding his death - remain shrouded in mystery, fuelling a number of conspiracy theories.

For instance, the circumstances surrounding his botched peace mission appear to indicate that secret talks had already been planned between Hess and a number of high-profile British establishment figures.

Indeed, in 1940, the senior Nazi’s former geopolitics professor shared with him his belief that the King held a strong dislike for Winston Churchill and, through use of divide and conquer tactics, could be coaxed to dispose of the PM if enough high ranking British officials were persuaded of the benefits of ending the war with Germany.

The theory - championed by Lynn Picknett, Clive Prince and Stephen Prior in their book ‘Double Standards: The Rudolf Hess Cover-Up’ - therefore, is that the supposedly unexpected arrival of the Deputy Führer on British soil was, for some members of Britain’s wartime government (among them Prince George, the King’s brother) not so unanticipated as has been retroactively stated in historiography on the topic.

Indeed, Picknett, Prince and Prior claim in ‘Double Standard’ that, although Hess was ultimately declared insane and imprisoned for life, the Duke of Kent took him ‘very seriously indeed’.

They further theorise that Prince George was to represent the Royal Family in a bizarre ‘welcoming committee’ set up for Hess’ arrival. When Hess was captured upon landing and the plan ‘all went horribly wrong’, the authors claim that the Royals rapidly covered their tracks and denied all knowledge of the peace mission.

Other evidence - some coincidental, some unexplained - supports the conspiracy.

That Hess arrived during the final and heaviest night of the German aerial bombardment against the British capital indicates that he hoped the raid could be utilised as a bargaining chip - a grim show of force to coerce British officials to the negotiating table.

Mere days later, the RAF temporarily agreed to pause their reprisal raids against German cities, and, accordingly, the Germans halted their own airborne onslaught. While this pact was welcomed by the war-weary people of both countries, it only fuelled speculation that the two nations had struck a ‘secret armistice’.

Furthermore, the peculiar orders issued to Captains Bauman and Srom of Aldergrove airfield point towards Hess’ arrival as an event expected in advance.

Their instructions to hold their fire seemingly reveals that Hess planned his mission so meticulously that he had already agreed the details of a contingency plan with the RAF.

After all, even though a lone aircraft would have been unlikely to cause much damage by itself, why would a pair of fighter pilots be ordered to avoid combat with a German light bomber at the height of the Blitz if not for the fact they were intended to escort it to a pre-planned landing zone?

The most glaring proof of this theory is Rudolf Hess’ own navigational map.

Whilst Dungavel House, the residency of the Duke of Hamilton, was Hess’ intended destination, Aldergrove airfield was clearly marked on his map as a possible secondary landing site.

In 1946, Hess was moved to Spandau Prison, a converted fortress in West Berlin, where he served the rest of his life sentence.

Jointly administered by the United States, Britain, France, and the Soviet Union, Spandau was initially home to seven Nazi prisoners, but, by 1966, Hess was the prison’s only remaining inmate, his fellow Nazi captives either having been released or died by that time.

Hess himself, however, had his freedom blocked by a Soviet veto, and so he remained in Spandau at a cost of over $1 million per year.

The puzzling incongruities in the official Rudolf Hess story, however, did not end with his imprisonment.

In September 1973, a British surgeon named Hugh Thomas was brought to Spandau to undertake a detailed physical examination of the man who was once the second most powerful figure in the Third Reich.

His findings, seemingly at odds with Hess’ medical records, perplexed him.

Hess had sustained a number of wounds whilst serving in the First World War. In 1916, he was hit in the left arm by shrapnel during the savage Battle of Verdun. Then, the following year, he was struck by yet more shell splinters during fighting in Romania, where he was also shot in the chest.

The bullet exited near his spinal column and left a cherry-stone sized exit wound.

Such recorded wounds notwithstanding, Thomas could find no scars or bullet wounds on the prisoner’s body. He concluded that the man serving Hess’ life sentence was not the Deputy Führer, but a planted lookalike.

The doppelganger theory would certainly lend some credence to some of the wilder elements of the conjecture proposed by Picknett, Prince and Prior - namely their suspicions surrounding the Dunbeath air crash.

On August 25th, 1942, Prince George was travelling aboard a Mark 3 Short S.25 Sunderland on a ‘Special Mission’ in the north of Scotland when the seaplane veered off of its flight path and crashed into the remote Eagle’s Rock.

The Duke of Kent was killed outright, along with 13 others of the plane’s complement of 15 passengers and crew.

However, Picknett, Prince and Prior discovered that one too many bodies was recovered from the wreckage of the tragic flight, tracing its movements to a solitary house where Rudolf Hess had at one time been kept.

Could the extra body have been that of Hitler’s deputy? Was the Duke of Kent taking Hess to peace talks in Sweden when the plane crashed?

On August 17th, 1987, an American guard at Spandau Prison found Rudolf Hess lying on the floor of a nearby garden shed. An electrical cord was wrapped around his neck, and the official inquiry declared that he had committed suicide.

With his lack of scars - not to mention the suspect presence of an unaccounted-for body at the Dunbeath crash site - was the man imprisoned in Spandau even Hess?

The simple answer, despite a number of unresolved anomalies and ambiguities, is probably ‘yes’.

In January of 2019, a blood sample supposedly from Rudolf Hess was located and, through DNA testing, compared to that of his living relatives. The results showed with 99.99 per cent certainty that the prisoner was indeed Hess.

The mysteries surrounding Hess, however, are not entirely resolved.

One former guard at Spandau remains adamant that, due to the advanced stage of his rheumatic arthritis, he could hardly open his hands and was unable to raise his arms above shoulder level - meaning it would have been practically impossible for him to hang himself.

Both the cable that caused his death and the shed were ordered destroyed on the specific orders of the British military governor.

Could it be that Hitler’s right-hand man, an unrepentant Nazi to the end, was silenced to prevent him from revealing the extent of his corroboration with splinter groups within the British government who wanted to make a separate armistice with Nazi Germany?

It is unlikely we will never know for sure - but, regardless, the fact remains that Aldergrove airfield had its part to play in the strange story of Rudolf Hess’ deranged gambit for peace in the name of war.