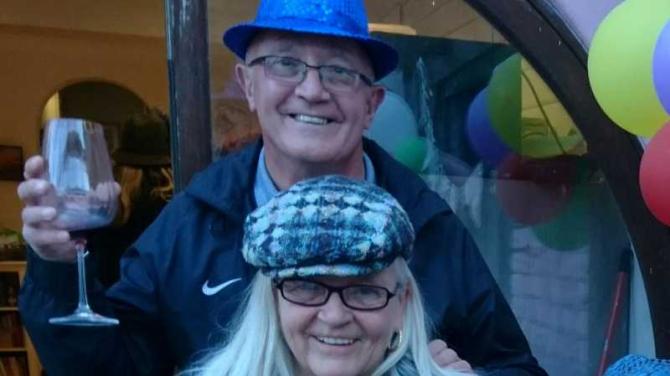 A FORTNIGHT ago, we told of how an Antrim Guardian article helped reunite a man with his long-lost family in the town back in 2017.

Now the sister he never knew he had, has told of how a headline in the paper she found in a library in England helped the pair meet for the first time last year.

Three years ago in May past, David Martin took what he thought was his last shot at finding any living relations.

He wrote to the paper, appealing for help and explained that his greatest ambition would be to shake the hand of a family member.

He understood that his mother’s maiden name was Allen and that she came from the Menin Road area of Antrim.

She was believed to have remarried in England after his birth, when she was in her late 20s.

His real father was thought to be Irish but was not named on the birth certificate.

After a few false starts with potential adopters and foster homes, David, who is now known as David Ralph Martin, was eventually taken under the wing of his adoptive father, a man of Italian extraction who lived on Buckingham Palace Road in London and ran a Catholic travel agency to pilgrimage and prayer sites.

The Antrim Guardian had placed David’s appeal on the front page and also put him in contact with local historian and sacristan at St Comgall’s Church, Brendan Smyth, who started making enquiries on the ground in Antrim.

Within 48 hours of the newspaper hitting the stands on June 13 2017, David was in contact with one of his cousins, Gerry Allen.

And just months later, he was warmly welcomed into the fold by a whole room full of relatives that he never knew existed.

Stepping off the plane onto the tarmac at Aldergrove, that August, David said he felt like he had ‘come home’.

Amid emotional scenes, David walked into St Comgall’s parish centre to a huge round of applause and shook Gerry’s hand, ‘completing the circle’ as he described it.

And there to see it all were his own son and his wife, who now live in Galway and had driven up to witness the reunion.

From there, David was introduced to a long line of aunts, uncles, cousins, nephews and nieces.

Mary was one of 14 children born to Dan and Sarah Elizabeth Allen, living in a small bungalow on Menin Road.

Mary herself had gone to London to seek her fortune - and David got to visit the old family home, the church where his mother was baptised and the very station from which she would have disembarked her old life.

But the story did not end there,

David explained: “Back in August 2017 when I was reunited with my family in Antrim, I thought, have found my family - after 50 years I can close the chapter in this part of my life.

“I had always hoped that I would have a brother or sister, but over the years I had given up on that.”

“Whilst working at Newcastle United Football Academy my mobile rang and it was my cousin Ann Jones who informed me that there is a strong possibility that you have a sister - well that was it, I just stood there in a daze.” he said.

“A few hours later I was speaking to my sister Catherine.

“Yes - I knew straight away this is my sister.

“We had so much to talk about - what we had both been through - both of us had tried so hard, for many, many years, to obtain just a snippet of information which could throw some encouraging light on the early days and years of our lives.

“We wanted so much to meet up - this happened on Friday April 26 - the day before Catherine's 70th birthday.

“There was my sister walking towards me at Hastings Railway Station - it was so emotional - an amazing feeling.

“That evening we chatted about our early years of our life - our experiences - good and bad times.

“We went through various documents we had obtained over the years - it was like one big jigsaw with pieces all over the place and having difficulty in putting the pieces together.

family members - at the end of the evening our heads were spinning.

“The following day, Catherine's birthday, we went around to her son’s house for her birthday party - what a party.

“There to greet me was Catherine's son, wife and children - took a while to sink in that I was their Uncle and Great Uncle!

“What a excellent day, such a wonderful family also family friends, great memories. I will always be so grateful to them for making me so welcome.

“The following day I returned to my home in Newcastle - that was a hard journey - so hard to say goodbye.

“On December 3 2019 I was walking the dog and my mobile rang. It was Catherine. She was at a hotel in Newcastle to see me on my birthday - what a wonderful present - she had travelled all the way from Hastings to see her brother.

“Catherine and myself speak on the phone on a regular basis. I am so happy that we have found each other.”

In an amazing twist of fate, Catherine revealed how she had visited Antrim several times in an unsuccessful bid to track down family members - not knowing that her relatives were still living just streets away from where she trod.

She took up her side of the story, explaining: “After 50 years of stopping and starting my investigations to find my birth family, a visit to the library in Hastings, on March 27, 2019 was to be my last roll of the dice.

“Prior to this, I’d visited Antrim a few times over the years looking for answers.

“In 2005 I left a Saint Patrick's Day card at the grave of Daniel and Sarah Allen I had located.

“Someone had found the card and put it in the letterbox of a lady called Ann Jones, who turned out to be a cousin and was able to put me in touch with my Aunt Catherine, who I luckily met in Nottingham before she passed away in September. She was a lovely lady.

“After this, once again everything came to a halt until 2010, when a phone call came from out of the blue from another family member - Pasty, who it turned out lives close to me in Bexhill.

“We met up and went to Antrim together in March of 2011, but again things came to a dead end.

“But, in early 2019 - I happened to bump into Patsy again in Hastings.

“She told me that another person had come out of the woodwork. Could this be the brother I always believed I had?

“This spurred me on to get some answers. I met Norma, a volunteer at the library in Hastings, who helps local people to research their family trees.

“We had been searching for over an hour and my time was nearly up when the Antrim Guardian article popped up - and bingo!

“After this, things moved so quickly, by Saturday I’d found a phone number I had for Ann Jones in Antrim – and a few hours later, David and I were speaking on the phone!

“I just couldn’t believe it after all these years of searching. It was very emotional.

“The first conversation on the phone between David and I was so strange, because I immediately felt a connection.

“Then we exchanged photos – and I could definitely see a likeness.

“Finally we met on the weekend of my 70th Birthday! Such a joy.

“We now speak to each other all the time and visit one another when we can. Whilst it is such a shame our paths didn’t cross sooner, I feel completely and over the moon to have a brother now! I am very lucky.”