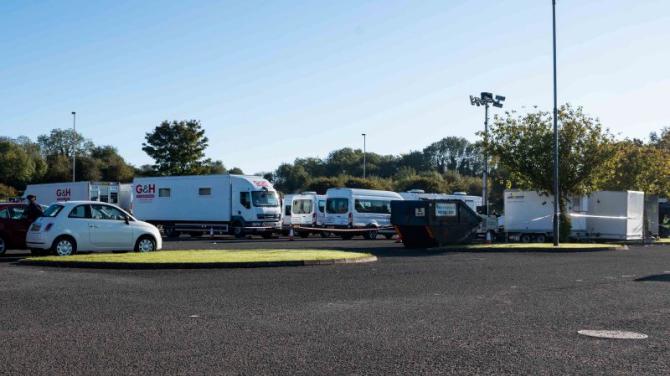 IT was ‘lights, camera, action’ in Antrim this week as another major television production company rolled into town.

A shanty town of articulated lorries was set up in the car park to the rear of the former Cineplex building on Fountain Hill - sparking much ‘rubber necking’ from locals keen to spot a celebrity!

Initially, many believed that it was the return of BBC blockbuster ‘Line of Duty’, which resumed filming in Belfast last week - after all, they had used the very same site as their local HQ in a previous series.

But then those mysterious little signs appeared guiding broadcasting blow-ins to the venue.

When Line of Duty was last in town, the letters LOD were deployed - much in much the same way that GOT steered visitors to the Lough Shore when the Game of Thrones behemoth descended on Antrim.

This time, however, it was the letters ‘AW’. At the Greystone roundabout, cast and crew were directed onto the production offices or to another location further along the Greystone Road.

That journey brought them to Ashgreen, where another fleet of vehicles, portable toilets and huge lighting rigs were in place. One house in particular appeared to be besieged by production crew - and there were whispers of Christmas decorations going up unseasonally early...

So what were they actually filming?

The first clue came in August 2019 when Studio Lambert, which is based in London and Los Angeles, confirmed that production was to proceed on a major two-part docu-drama for BBC1.

It was entitled ‘Awakenings’ - or AW for short.

After days of speculation, Alastair Agnew finally confirmed that Antrim was indeed to be the backdrop for part of the film.

“The production is a special two-part drama being made for BBC1.

“It explores the emotive issues around women’s rights and the experience of families and their loved ones whose lives have been profoundly affected by the law in Northern Ireland.

“The series is being produced by our parent company, Studio Lambert, who are responsible fopr programmes such as The Nest, Three Girls and the nation’s favourite Gogglebox.

“The drama is based on true stories that have been adapted for screen by an award-winning writer.”

As already noted, it is not the first time the cameras have rolled in Antrim - and it will not be the last.

Back in July, just as the province was emerging from what is now ominously referred to as the ‘first lockdown’, something rather curious was spotted at the Lough Shore.

Few could have failed to have noticed two distinctive vessels docked near the Boat Club - a pair of ornately carved Viking longboats.

And the arrivals certainly got tongues wagging.

Could this really be the return of Game of Thrones, which filmed scenes on the beach near Rea’s Wood during its epic run?

With the main story now complete, fans around the world have been waiting with baited breath for the eagerly anticipated prequels - though it was feared that they were currently lost in limbo after early story treatments were rejected by HBO.

But then another possibility sailed into view to further muddy the waters.

Robert Eggers, the director of critically acclaimed art house hits ‘The Witch’ and ‘The Lighthouse’ was in Northern Ireland too. He still is, in fact.

The cameras were due to roll earlier this year when the production was shut down because of COVID-19.

His latest film is his biggest yet, and is scheduled to star Nicole Kidman and Willem Dafoe.

So what’s known about it so far? Well, locations for ‘The Northmen’ have already been scouted across Northern Ireland, sets had been built and filming is underway.

But most intriguing of all was the subject matter: it was a Viking revenge saga following a Nordic prince on a mission to avenge his father’s murder.

Quite a coincidence, then, that two Viking boats had dropped anchor in Antrim!

So which is it going to be then? The biggest television series in history, or a Hollywood blockbuster?

Tantalisingly, the answer may well be BOTH.

A special council meeting was convened earlier this summer, and one of the items on the agenda was filming at the Lough Shore - and it seems that as a location it is very much in demand.

“A booking has been made at short notice from the company managing planning arrangements for a Game of Thrones filming exercise,” said a council spokesperson.

“The company were seeking a location to safely test two Viking boats commissioned for a production being filmed later in the year.

“Following a site meeting the company has booked out an area at the jetty near the Gateway Centre to crane in both Viking boats into the Lough to facilitate water testing and certification.

“The boats will be on site with 24-hour security provided by the events company from Monday July 6 until Friday July 10.”

So there you have it, another mystery solved. Well, not quite.

For at the same meeting, members were briefed on another project in the pipeline.

“A further booking with similar requirements is planned for later in the year to facilitate filming.

“Lough Neagh Rescue has been consulted to ensure that access is not hindered and all arrangements are satisfactory.

“There will also be a temporary minor diversion in a path for the duration of the booking.

“The event company will also have security marshalls on site as it is expected that the booking will attract a lot of interest.”

‘A lot of interest’? The sort of interest generated by the presence of top Hollywood stars perhaps?

COVID-19 has seriously curtailed trips to the cinema, of course. Deprived of a chance to go and watch the stars, isn’t it nice that they come to us?