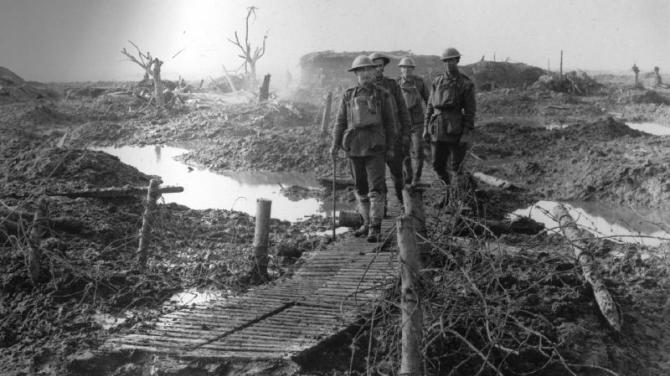 IT was the fourth summer of the First World War, and the blood drenched Western Front remained locked in stalemate - and, only one year after their mauling in the horrific Battle of the Somme, Antrim’s heroes prepared to descend into yet another corner of hell.

An ambitious French attack against the German lines earlier in the year, the so-called ‘Nivelle Offensive’, had not only failed to achieve its grand objective of breaking the deadlock and winning the war, but had also spiralled into a near catastrophic fiasco that brought the French army to the brink of mutiny.

And, with Russia on the cusp of revolution on the Eastern Front, something had to be done to maintain the pressure on the German forces in the West.

And so, as the trenches grew deeper, the barbed wire higher and the casualty lists ever longer, all eyes fell on Field Marshall Douglas Haig and the British Expeditionary Force as an enormous new offensive effort was planned.

His hammer blow would take place, despite the protestations of his junior officers and Prime Minister David Lloyd George, around Ypres in Flanders.

In the low-lying, marshy ground of the ‘Ypres Salient’, Allied forces were overlooked on three sides by German gunners who had pre-sighted the entire plateau.

Once again, the town of Antrim would be called upon to make a sacrifice disproportionate to its size.

The 36th Ulster Division was, by 1917, a very different formation to the one that had attacked Thiepval only a year before.

Although its gallant performance in that battle had highlighted it to British high command as a prime attack force capable of cracking even the hardest nuts in the German lines, the reality was that it had already lost many of its veteran troops on the Somme and at Messines.

The survivors of its original cohort were now bolstered by inexperienced conscripts and men from the south of Ireland.

The early swift successes of Haig’s offensive, however, slowed to a crawl as an unseasonably rainy August transformed the very topography of the battlefield.

The delicate Flanders sewage system, already damaged after years of fighting, was overwhelmed by the rain and the constant artillery fire, and the ground became a morass of thick, sucking, liquid mud that often drowned men and mules alike when they strayed from the slippery wooden duckboards that paved the way to the front.

Life - let alone combat - on the frontlines became a miserable struggle against the elements.

Wounded men sank into the quicksand-like mud and disappeared without trace, only to resurface when exploding bombs exhumed them.

Although yet to be ordered over the top, constant German shelling soon began to inflict a fearsome toll on the Antrim men stationed at the front.

Alex McCreight, hailing from Islandreagh, was wounded by German artillery on August 3rd. A blacksmith before he enlisted in the Royal Irish Rifles, he had been posted to Ypres only a month after his wedding in June 1917.

Although he recovered from his wounds and went on to join the Labour Corps, he was Antrim’s first casualty of the new offensive. Many more were to come.

Two days later, on August 5th, riflemen Johnnie McCartney and Victor Pollock - childhood friends with a mutual love of boxing who also marched together at the Thornhill Loyal Orange Lodge - were killed in action.

The following day, Sergeant James Megarry from Aldergrove died. In a condolence letter penned for Megarry’s family, his commanding officer paid tribute to the ‘magnificent example of courage and devotion to duty’ exhibited by the sergeant towards the men of the platoon. Then, on August 10th, Muckamore resident William Greer was also killed.

On August 11th, the Ulstermen were struck by German mustard gas shells. Capable of incapacitating victims en masse, the faint yellow-green coloured gas formed large blisters on exposed skin and in the lungs.

By the end of the day, one company, already diminished in size after several days of heavy shelling, could muster only a platoon’s worth of able-bodied soldiers.

A short time later, on August 16th, the already exhausted 36th Division was placed in the vanguard of a fresh push that, it was hoped, would regain the early momentum of Haig’s stalling offensive.

Historians would retrospectively refer to this phase of the battle as the ‘Battle of Langemarck.’

Cyril Falls, the Ulster divisional historian, wrote at the time with grim understatement that ‘the story of the attack, alas! Is not a long one’.

Leaping from their starting lines into the deathly quagmire of no-man’s land, the troops - wading through mud that was, at times, knee deep - were easy targets for the carefully sited crossfire of mutually supporting German machine guns encased in formidable concrete ‘pillboxes’.

Swept by machine gun fire and falling in droves, the attackers were repulsed at enormous cost. Those that managed to make it to their objectives were eventually pushed back by a furious, hastily organised German counterattack. General Oliver Nugent, commanding the 36th Division, wrote ‘it has been a truly terrible day. Worse than 1st July (1916), I am afraid’.

Seven Antrim men were killed in this action alone, including riflemen Jack Johnson and George Adair. Corporal James Adams, from Dunadry, was also among the dead - the second nephew of author Alexander Irvine to perish in the First World War.

Others suffered terrible injuries, the effects of which would linger long after the war. Lieutenant John Cunningham, serving with the 16th Irish Division adjacent to the 36th Division during the Battle of Langemarck, was struck by a machine gun bullet which fractured the neck of his right femur. The round, lodged so deep it could not be removed, caused a displacement of bone that meant one of his legs was shorter than the other for the rest of his life - and the Edenduff man was only one of the 4,200 casualties sustained by 16th Irish at Langemarck.

By the time the two battered Irish divisions were withdrawn from the line to recover and rebuild, they had suffered huge losses. One of the last 16th Division soldiers to fall before the unit was pulled from the line was Private James O’Donnell, a man who had been employed by Northern Ireland Railway Company prior to his service in Princess Victoria’s (Royal Irish Fusiliers).

Yet, Antrim’s losses in the battle did not end with the withdrawal of the 36th and 16th Divisions. As autumn drew on and Field Marshall Haig turned his attention to a tiny, blasted village named Passchendaele atop the last ridge east of Ypres, the final offensive loomed. It was to be undertaken by the Canadian Corps - which, surprisingly, included a small number of Antrim ex-pats in its ranks.

On October 26th, the first day in a series of Canadian attacks against Passchendaele, Private David McGrath was killed. He had worked in Muckamore before emigrating in 1911 and settling in Elgin, Manitoba.

And, on November 6th, when Canadian troops finally entered what used to be the village of Passchendaele and found it reduced to an unrecognisable mess of shell craters and smashed rubble, William John Yarr met his demise. He had been a parishioner of St Catherine’s Church in Killead and had a wife and three children waiting in Crumlin at time of his death.

Four days later, on November 10th, 1917, Haig finally called for an end to his Flanders offensive after three months of barely imaginable carnage.

Some 300,000 Allied troops were killed or wounded in the squalid killing fields below the Passchendaele Ridge - the equivalent to one casualty for every two inches of muddy ground won. It became one of the most controversial actions of the First World War, given the apparent lack of tactical or strategic importance attributable to the captured land.

The seeming futility of the battle - illustrated by Field Marshall Haig’s willingness to cede the Passchendaele Ridge, paid for with so much Allied blood, without a fight to the advancing German army only a few months later during their 1918 Spring Offensive - has come to dominate the collective memory of the Great War.

‘Passchendaele’ has, in effect, become a byword for senseless slaughter.

However, around 300,000 German troops were also claimed by the Passchendaele meat grinder, draining the German forces of yet more irreplaceable soldiers and placing great strain on their diminishing manpower reserves. Despite their huge losses in 1917 alone, reinforcement concerns were of lesser importance to the Allies given the imminent arrival of thousands of American troops to the Western Front.

Therefore, the Passchendaele debacle, in an indirect way, did contribute to the eventual attritional defeat of Imperial Germany. But was the human cost worth it?

Such grand scheme questions of strategic importance, however, were of ancillary concern to the remaining Antrim-bred soldiers on the ground who were now preparing to go into action in what would become known as the Battle of Cambrai, a battle which would witness the first truly massed use of tanks in military history.

For them, all that really mattered was survival. Passchendaele had been a savage bloodbath of a campaign, but there was another long year of war ahead for the enlisted men before peace would allow them to return to Antrim.

By the time that the guns fell silent after four long years of war, over 100 of Antrim’s own would never see the town again, breathing their last on the battlefields of France and Flanders.