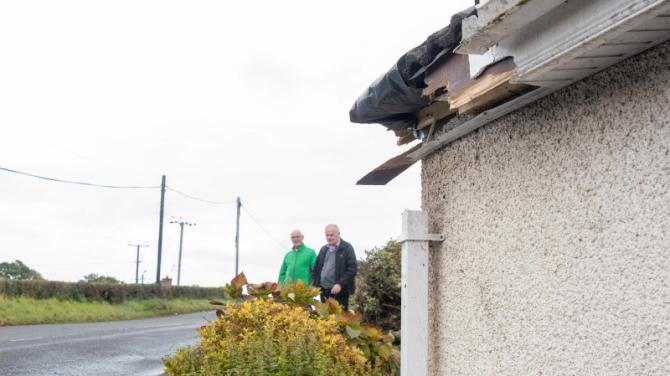 A RESIDENT on the notorious Roguery Road has appealed for drivers to be more cautious after a driver had a ‘miracle escape’ following yet another accident on the perilous stretch.

Last month Vivienne Pieterse (50) who had recently moved to Ahoghill and was originally from South Africa, passed away after a two-vehicle crash on the road.

Her death was the third fatality on the same stretch in as many years and came just months after the speed limit on the road was reduced following previous fatalities.

He was a passenger in a car involved in a crash with a lorry.

In July this year, a woman was injured in a crash between her car and a lorry.

A local resident has since told the Antrim Guardian that a driver’s car left the road a fortnight ago and smashed into the roof of a bungalow on Roguery Road.

Some years ago, there was another fatality when a car struck the gable end of the same house.

The caller himself said that a number of years ago, he discovered the body of a young woman who had been trapped under her vehicle after it became lodged in a man-made culvert close to his home.

And he reported another recent near miss as he attempted to turn into his own lane, saying that had he not braked suddenly before completed the manoeuvre, the other car would have hit him side on at approximately 70 miles an hour.

“There has been too many deaths and injuries on this road.

“The speed limit has been lowered, there’s a flashing sign to tell people what speed they are doing - but things are not getting any better.

“There’s a staggered crossroads, humps and dips, poor visibility, houses in close proximity to the road, it’s a recipe for disaster when you add speed or carelessness.

“And a lot of the poor people who died or were injured were not the ones doing anything wrong, they were just minding their own business.

“What will it take for people to be more careful?

“I couldn’t believe my eyes when I saw a car had left the road and damaged the roof of a house, especially so soon after that poor lady had passed away the previous week.

“The driver and the homeowner both had a miracle escape.

“I know residents and some local politicians have been shouting for years for more to be done, but it feels like the whole area has been forgotten about.

“You shouldn’t feel like you’re taking your life in your own hands by just trying to drive into your own lane.

“People on this road, including myself, have seen things we should never have to have seen and families have been left grieving, it isn’t worth getting to your destination that bit quicker or taking a call or getting distracted.”

Sinn Fein councillor Henry Cushinan visited the scene of the accident and said he was shocked by what he saw.

“Last weekend a motorist had a miraculous escape from a crash which could have had fatal consequences.” he said.

“One picture shows where the car struck the roof of the house, which is owned by Mr Gerard Scullion.

“This is an extremely dangerous road and motorists need to observe the speed limit and take care .

“We do not want any more tragedies on this or any other local roads.”

Mr Cushinan said that the driver had a ‘miracle’ escape.

“The car hit a fence, the roof of a house and the crash even knocked the homeowner’s electricity out.

“Thankfully the driver was able to exit the car and go for help.

“Mr Scullion himself was very shaken up, this happened quite late on at night and it must have sounded horrific.

“I and my colleagues have been trying to get something done about the Roguery Road and try and bring the rate of accidents and deaths down for many years - there is such a high volume of traffic, I am at a loss as to what we can do.”