Alex McKee: 'A Sportsman for all Seasons' 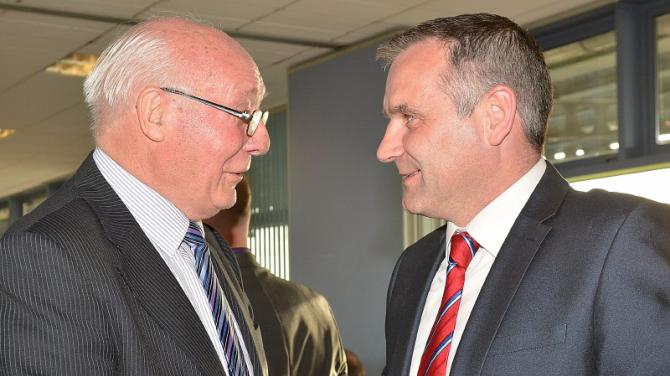 WEST Church Minister Rev. Daniel Kane recalled that the late Alex McKee was described in the Ballymena Guardian article back on October 2002 as being ‘A Sportsman for all Seasons’.

The report said that Alex had achieved more eminence across a wide range of sports than most, yet at the same time he was always very reticent to display his catalogue of successes.

“That’s the kind of man Alex was – always very self-effacing, never one to seek the limelight, never pushing himself forward,” outlined Rev. Kane, who was officiating at Alex’s recent funeral service.

“Alex was always the first to see the potential in others and push them forward to achieve their dreams and maximise their potential. That’s what made him the great football manager he was.”

Rev. Kane told the gathering that the Service of Worship was to give thanks for Alex’s life, and remember him with love and affection.

“Normally I would have expected this Church to be full for Alex’s funeral but the Government restrictions around Covid-19 have prevented that,” said Rev. Kane.

“The words I most hear when people speak of Alex are words like – a true gentleman, a sporting legend, a committed Christian, a great friend and a devoted family man who would do anything for anyone. The truth is that Alex was all of these things and much, much more.”

Rev. Kane recalled that Alex was something of a late-comer to sport – it wasn’t until he was a student at Stranmillis teacher training college that his latent talents came to the fore.

“He loved playing sport – basically anything that involved a ball, and he enjoyed every minute of it. Throughout his sporting career he graced basketball courts, rugby and football pitches and cricket creases. After retiring from playing the game he went on to become probably the best manager Ballymena United ever had,” said Rev. Kane.

“He held the huge accolade of being the last manager of the Sky Blues to win the Irish Cup back in 1989. He put his considerable experience and expertise to good use assisting and encouraging a new generation of sports stars. His impact on young players was always a positive one. And he always kept an active interest in Eaton Park doing what he could to maintain and improve the facilities out there.”

The Minister said that great and all as his sporting and managerial skills were, there was a lot more to Alex than that.

Rev. Kane said in spite of all this sporting success and national acclaim, which could easily have gone to his head, Alex was always proud of his roots in the Braid and he remained humble and down to earth man all his life.

Alex grew up on the farm with his two brothers and two sisters and he was pleased that Colin was keeping up the farm.

He attended Racavan Primary School, followed by Larne Grammar School and then Ballymena Academy for Senior.

He was successful in gaining a place at Stranmillis Teacher Training College as a 19 year old in 1958.

Following the successful completion of his training he entered the teaching profession most of which was spent at the Ballymena Boy’s Intermediate, followed by the Tech where he was the PE teacher – what else?

“Again that spirit of encouraging and inspiring the younger generation came to the fore as he initiated the Ballymena Youth Training Scheme well before it’s time,” said Rev. Kane..

“His positive impact was felt on many young lives as he pointed them in the right direction.”

He met his wife to be, Margaret, in 1961. They were married in Buckna Presbyterian Church in 1965.

Addressing Margaret the Minister said she has been the unassuming but effective power behind the throne throughout Alex’s stellar career.

“He wouldn’t have been able to achieve half of what he did had it not been for your stalwart behind the scenes support,” he said.

“Together you both shared a lot of happiness in your marriage and in your home – sticking together through the good and the bad.”

He continued - “Your happiness was completed with the arrivals of Valerie, Karen and Colin who brought you so much pleasure and delight. Alex was so proud of the three of you and so happy to see you progressing in life and following your chosen pathways.

“He was a huge support to all three of you and I know you will really miss his guiding presence and practical help. And he simply adored all five of his grandchildren. As far as he was concerned you were simply the best.

“He was so proud of all your achievements – how you were getting on at school and uni and the sports you were playing. Each of you knows the very special place you had in his heart.”

He was always at Church along with Margaret – sitting in the gallery along with Karen and her family.

“One of the best things Alex ever did was when he accepted the Lord Jesus as his Saviour through the first Alpha Course we ran here in West back in 1999,” recalled Rev. Kane.

“That brought big changes to his life. The presence of the Holy Spirit was so evident in him. He went on to serve the Lord through membership of the Church Committee and his loyal attendance at our Midweek Bible Study and prayer meeting along with Margaret.”

In June 2005 Alex was ordained as an elder in this congregation - measure of his spiritual stature and popularity.

“He just loved to serve the Lord in this way – especially visiting his elder’s district out at Ballykeel which he did on a very regular basis,” and Rev. Kane.

“Alex was a brilliant elder and the people in his district just loved to see him coming to visit. He was so practical and kind doing all kinds of odd jobs and messages for them and taking them to various appointments – just typical Alex.”

He also helped to run a couple of subsequent Alpha courses in Church and took great joy in seeing others coming to faith in Christ as well.

Margaret and Alex very kindly opened their home every other Thursday evening to host one of the longest running Home Bible Study Groups.

“This was a huge commitment over the long term – but Margaret and he just revelled in it and loved having people to their house to study God’s Word together,” said the Minister.

“As you would imagine he was a great host and every one was made to feel welcome and if there was anything he could do for anyone – he did it.”

Alex’s other great contribution to the Lord’s work at West was through his leadership of Men United.

“Men United is a group of men of shall we say more advanced years who met every Wednesday morning in the Church Lounge to drink coffee, read the papers, chat and listen to a speaker up until last March,” said Rev. Kane.

“And Alex organised this very popular event in his usual friendly and thoughtful way from its beginning for the past 15 years or so.”

Speakers were brought in from a wide variety of backgrounds, Jackie Fullerton, who became a member, David Healy, Karl Frampton and a host of others to name but a few – always someone of interest with something to say.

“Needless to say they are all devastated at the sad news of Alex’s death and in normal circumstances I have no doubt that they would have all been here to say “thank you” to Alex and pay their respects – he made Men United what it is and continues to be,” said Rev. Kane.

“I personally counted it a privilege to know Alex and I’ve always admired his gentleness with people and quiet humility. I was visiting Alex when the news of the 9/11 attack on the twin towers came on the radio – something I will never forget.”

Rev. Kane said that not only was Alex’s relationship with Christ important to him and the main driving force of his life these last 20 years or so – it was also the mainstay of how he dealt with the devastating diagnosis he had recently received about his health.

“I spoke to him on the phone from his hospital bed last week, and yes quite naturally he was tearful about what the future might hold, but he was also sure of the Lord’s presence in his life and that gave him comfort and courage,” said the Minister.

“He insisted that his time was short, but also that he knew where he was going which made all the difference in the world to him.”

The Family thanked all those who attended Alex both at home and in hospital, as well as everyone who sent messages of sympathy and support and helped in any way.

Rev. Kane said they had all lost a great friend in Alex McKee.

“So as I said at the beginning of the service this is the best place to come as we enter the comforting presence of the Lord. Without his power and reassurance in our lives, our grief would overwhelm us.” he said

Rev. Kane reminded all those beset with the common heart-aches and tragedies of life that God will come through to them in the end.

“The cross of our Lord Jesus Christ - that unique place in time and history where the star-breathing God became the sin-bearing Redeemer. The cross where the universe maker became the Saviour of the world, Alex’s Saviour, your Saviour and my Saviour!

“The cross is God’s irrefutable demonstration that He has a purpose for every event of our lives and his purpose will triumph and His purpose will prevail over everything else no matter how unlikely that may look to you at this present moment!

“You see the truth is that God is always doing his best thing, his most exciting thing, even his greatest thing when all seems lost and dark and pointless! That’s the sweet irony of the Gospel! And the resurrection of Jesus from the dead is proof positive of that.”

Rev. Kane spoke of the amazing promise, that “when you finish the race, be it long or short, you will stand before His glorious presence, clothed in glory not your own and you will see his beautiful face.”

“And today that reassurance can be yours as well in just the same way as it was Alex’s. It’s a matter or trusting the Saviour as he did.”

Rev. Kane said the Church members and colleagues expressed their love and sympathy to Margaret and the family circle.

* Alex passed away peacefully at his home at Parkmount Crescent, Ballymena, on September 26. His funeral was on September 29, with interment at 2nd Broughshsane Presbyterian Church.