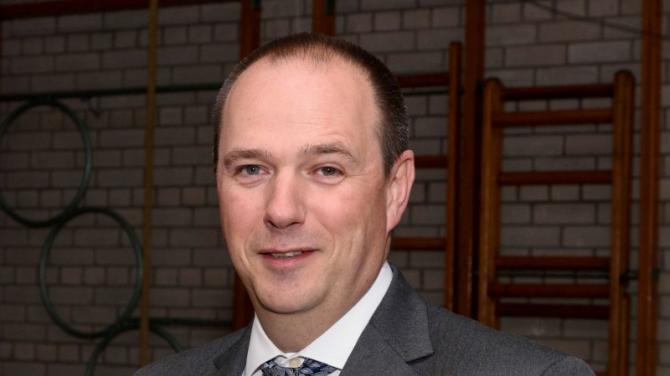 AN inspirational primary school headmaster and a councillor who pulled out all the stops to help the community have been given gongs in the Queen’s Birthday Honours List for 2020.

Stephen Baillie, Principal of Parkhall Primary School was awarded a BEM (Medallist of the Order of the British Empire) for services to education and the community during COVID-19.

Antrim Town DUP Councillor Paul Dunlop was awarded a BEM for his services to local people during the crisis, as was his Newtownabbey party colleague Mark Cooper.

Meanwhile, Arthur Fleming, of Ballyclare Victoria Flute Band, was awarded a BEM for services to music.

“It is fantastic to see that some of our residents have been recognised on the Queen’s Birthday Honours List for their hard work and dedication to their service,” he said.

“I was also pleased to see my fellow colleagues, Councillor Cooper and Councillor Dunlop included on this list in recognition for their work supporting the community in the early period of this pandemic.

“On behalf of the people of Antrim and Newtownabbey I offer my warmest congratulations to them all.”

In May, Mr Baillie paid tribute to the staff who pulled together after his school became a hub for the children of key workers and provided services to a cluster of ll other schools in Antrim and Randalstown.

Parkhall also supported pupils from other schools that sought a placement through the EA Key Workers placement.

“The children have adapted well to the new normal and life in our supervised learning is relaxed and enjoyable for all.” he explained at the time.

“The day, starts with Just Dance, Joe Wicks has been usurped, followed by learning activities.

“At break time we try to let the children play for longer outside, more learning, play outside and we finish the day with a DVD on our big screen.

“The local police called into school to talk to the children about their role and left some goodies for the children.

“Obviously we wouldn’t have chosen this current situation, but we are trying our very best to make the supervised learning relaxed and calm for all children, their families and the staff.”

Paul Dunlop was instrumental in co-ordinating the community response to the crisis in Antrim, helping pull together various different community groups together to deliver aid packages to vulnerable and shielding residents.