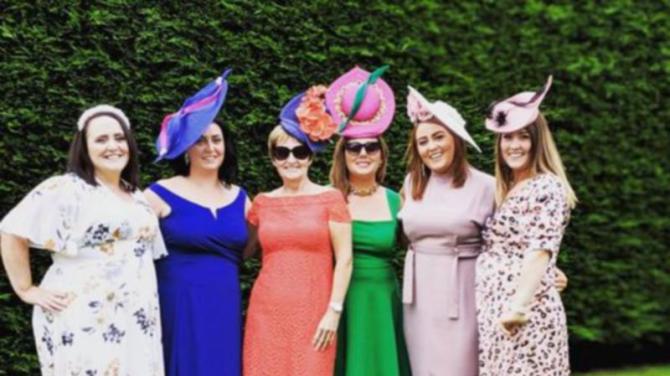 WITH weddings severely restricted and race meetings closed to the public because of the coronavirus pandemic, the business landscape has changed beyond all recognition for Ciara Fennelly (pictured above).

She is a milliner - or hat maker - but rather than let the current situation get her down, she has decided to throw herself into charitable endeavours instead and has helped raised thousands for charity through ‘Virtual Ladies Day’ events, featuring her own creations.

We spoke to Ceara for the first time at the start of the year.

Originally from Brantwood Gardens, Ceara is an aircraft dispatcher at Belfast International Airport, but in the evenings, her head remains firmly in the clouds with her hobby of millinery.

Ceara lost her dad several years ago and credits working in Ivy Lane Floral Design Studio in Church Street with helping her mother overcome her grief.

Owner Helen Faulkner then invited Ceara to start displaying her work in the artisan area at the back of the shop.

A former activity and art therapist, Helen saw for herself the therapeutic and transformative effect of plants and flowers and decided to retrain and start her own business.

A former pupil of St Malachy’s, Ceara said that she was always artistic, but that her desire to help other women to ‘look like a million dollars’ lead her down the road of millinery.

The family had always enjoyed days out at the races and as a child, Ceara was fascinated by the glitz and glamour of the well-dressed ladies.

Working in aviation also gave her a glimpse at what fashion-forward women were wearing to big events - from people flying out to Royal events or celebs jetting in to the likes of the MTV Europe Music Awards in Belfast.

“Arts, flowers and floristry definitely runs in the family, and with my mum working at Ivy Lane and me being in there all the time, I saw how floristry and millinery could work hand in hand.” she said.

Ceara attended a number of courses the length and breadth of Ireland, seeking the tutelage of top stylists and makers like the world famous Grainne Mather, Fee McToal and Niav Reilly.

“I definitely wanted to find my own style - I love Audrey Hepburn, I like the understated, classic look, nothing too off the wall!

“I start with an idea in my head and am led by the client.

“We can work through some sketches and go from there, and co-ordinating with the outfit is also very important, I love doing jewelled headpieces, or the more traditional mother of the bride hat.

“If it’s a wedding I work with the colour of the bridesmaids’ dresses and get a nice co-ordinated look and try to collaborate with the wedding party as much as I can.

“My childhood obsession with the race days also became a huge inspiration.”

Ceara only started up in 2018 as ‘Four Seasons Millinery’ and credits the power of social media with her early success.

Whilst still a hobby, Ceara puts her heart and soul into her projects, which often take a week each or longer to complete, with everything made by hand.

She particularly loves working with felt and crystals and other items from a range of suppliers, including Belfast firm Abacus Beads and the late lamented Craftworld.

“I am naturally quite a shy person but I began working with Michelle Irvine in personal development, she is very much a believer in ‘what is for you, won’t pass you’.

“She encouraged me to just get myself out there and ‘live my best life’.

“I now believe that everything happens for a reason.

“So I began to put my work out there and try and set myself some goals.

“I caught the attention of bloggers and influencers, which helped get people talking.

“Someone would wear a hat or headpiece and put it on their pages and that will get hundreds of people looking at it.”

Among her clients have been Charlotte Tilbury models and make-up artists, who wore Four Seasons items to Down Royal, and other pieces have been worn at the world famous Galway Races.

Perhaps Ceara’s biggest endorsement by far has been from Derry Girls star Nicola Coughlan - most recently seen putting audiences in stitches during a Great British Bake Off apperance over the festive season.

“We were friends on social media and I messaged her asking if she would be interested in some items,” said Ceara.

“She couldn’t have been nicer and was very keen to support a local artist.

“I sent her two headpieces, one of which she wore during an appearance on Drag Race on TV, and then at her birthday party, which saw a headpiece that I made all over Twitter, Facebook and Instagram.

“She was so lovely to deal with and she looked fabulous.”

And even though local ladies have been stuck at home and unable to go out, Ceara has still helped them to look fabulous at home and raise money for charity too, thanks to the Virtual Ladies Day initiative.

Ladies were invited to snap a picture of themselves as if they were heading to Ladies Day at the Galway Races, then make a small donation to a charity of choice and finally post the entry to social media, with plenty of prizes on offer.

Her family chose the Irish Heart Foundation in memory of her late father, and raised £260, Ceara’s daughters and Mum getting involved, donning their best frocks and wearing her own creations!

Another Virtual Ladies Day supported by Ceara and organised by Melissa Carthy in the past few weeks was the ‘Fashion Fillies’ event, which has raised over 3300 euros for the charity Feilecain Féileacáin, founded by a group of bereaved parents who came together to offer hope and support to others affected by the loss of a baby.

Again, the entrants had the chance of winning prizes for their efforts.

And Ceara isn’t stopping there, deciding to make something good out of a bad situation.

“I also have a big raffle coming up.” she said.

“I will be raffling of a gift box of goodies.

“All proceeds will be going to PIPS and Pieta House in aid of suicide awareness and prevention.”