Kill speed or lives will be lost 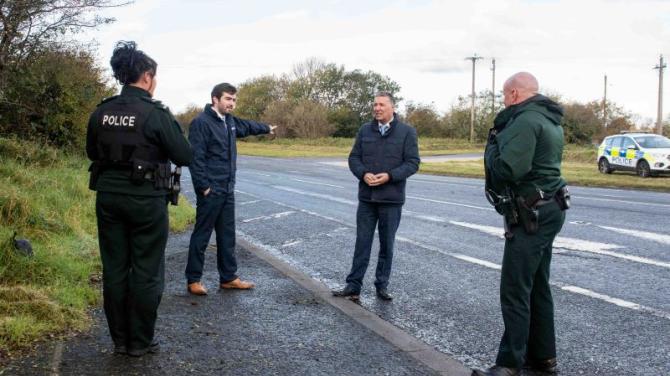 YOUNG drivers performing dangerous ‘stunts’ in their cars at high speed are putting lives in grave danger on local roads, it has been claimed.

Paul Girvan MP and Councillor Matthew Magill held a number of site visits with DfI Roads and PSNI representatives on Friday to raise concerns about ‘anti-social issues’ in the Ballyutoag and Nutts Corner areas.

And it seems that the DUP men were preaching to the converted.

“We have had a productive discussion with both Roads Service and the PSNI and raised with them the difficulties that local residents are facing, day and daily, in the Ballutoag area,” said Mr Girvan.

“I am pleased that Roads Service have already commenced upgrade and safety works at the Carn Road crossroads alongside their commitment to increase safety signage in the area.

“I would urge locals and commuters who use these busy roads to be mindful of their speed and the dangers involved with speeding.

“The police have committed to paying particular attention to speeding in this area and to clamping down on those who treat these roads as a race track into Belfast.

“There is no excuse for speeding regardless of whether it is through urban areas or rural locations, speed limits are not a target to be reached.

“I will be working with the various statutory agencies in relation to this area in an effort to clamp down on speeding and those who terrorise local residents with rallying and performing doughnuts at the various junctions.”

Local councillor for the area, fellow DUP man Matthew Magill, went further still - warning that lives will inevitably be lost if drivers refuse to slow down.

“Despite the almost weekly road accidents in the area, speeding continues to be a major issue particularly on the Ballyutoag Road, the Ballyhill Road and the Seven Mile Straight.

“It is now time to take action before another life is tragically lost.

“I would urge people to reduce their speed as we enter the winter months especially and be mindful that speeding kills.

“Incidents of rallying, drifting and young people performing doughnuts is also a major issue in the area and one that the PSNI are clamping down on.

“I would encourage residents to make the PSNI aware of such instances of anti-social behaviour as we try to stamp out such dangerous activities in the Ballyutoag area.”

And the police are already on the case.

Speaking afterwards, Constable Cunningham said it was clear that young people were using the roads to ‘diff’ - or drift at speed.

“We believe this is one of the locations which is used by young drivers to diff,” he told the Antrim Guardian.

“There are regular tyre marks on the road which indicate this is happening.

“We would be concerned for the safety of not only other road users but also those taking part in the diffing.

“The Ballyutoag Road leading to the Belfast Road has been the location of a number of serious road traffic collisions over recent years and we would ask all motorists including those who are diffing to drive within the speed limits.

“We will look to increase enforcement and will work with partner agencies to try and reduce speeding on all our roads.”