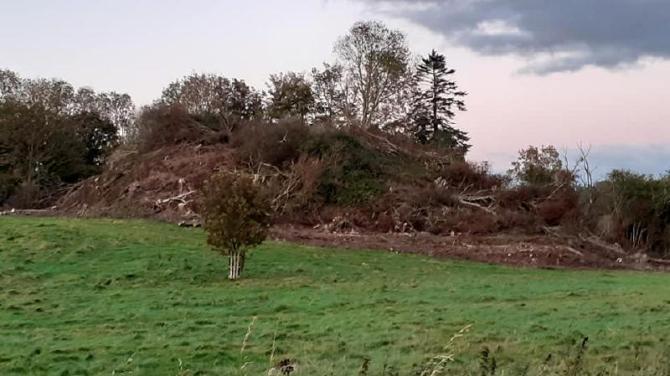 OVER the past few weeks, people travelling from Toome to Antrim or vice versa have been subject to a unique sight out their vehicle’s window, writes Stephen McCracken.

About three weeks ago, the Shane’s Castle estate cleared the foliage and trees from a hill, which all now can see is in fact an old Hill fort, which is in a brilliant condition.

The site itself has been under foliage for the past 200 years of mapping.

In an 1820s map, this is called ‘The Mount’ and a well is attached at the bottom of the south face.

With one side leading down to the River Maine, it’s a formidably secure fortification, which would have given the residents an early warning of approaching boats.

Maybe this site once saw the likes of the Vikings approaching in the 10th century.

From the top, one would have a clear view over Lough Neagh.

On the other side of the motorway is the Dunmore Bridge, which featured in the series Game of Thrones.

Dun More is the old Irish name for ‘the great fort’ and most likely was the original name for Randalstown.

In 1667 the name Randalstown superseded from the name Ballydownmore in Dunmore (the Maine Water town is also used sporadically pre-1667).

The change of the name of the town was occasioned by the marriage of Rose O’Neill of Shane’s Castle to Randal MacDonnell, the second Earl and first Marquis of Antrim, in whose honour the town was re-named Randalstown.

The name of Dunmore changing to Randalstown is a more recent event, occurring in the mid 19th century.

The Irish Townlands Project calls the mound ‘an old motte and bailey castle which stands just to the immediate south of Randalstown’.

The name would suggest that this was an Irish native fort and was taken over and made into a motte and bailey Norman site.

It also can be seen that the native Irish also built in the same style as the Norman model.

The lack of archaeological evidence means we cannot draw any firm conclusions.

The name Randalstown can be translated into Baile Raghnaill in gaelic.

The 1830s ordinance survey memoirs have this to say: “About two miles to the west of Shane’s Castle, and in the demesne as it is at present, there stood within memory the ruins of an ancient building commonly known as Dunmore Castle, but of which not the slightest vestige now remains.

“It is more than 30 years since all trace of these ruins has been removed, and now except the name nothing further is remembered or known relating to them.

“It is situated on the summit of a very steep bank overhanging the River Maine, above which the summit of the fort is elevated 86 feet.

“It is situated on the right bank of the river, in Shane’s Castle Demesne, and about a fifth of a mile below the town of Randalstown.

“There are faint traces of a parapet which enclosed the summit.”