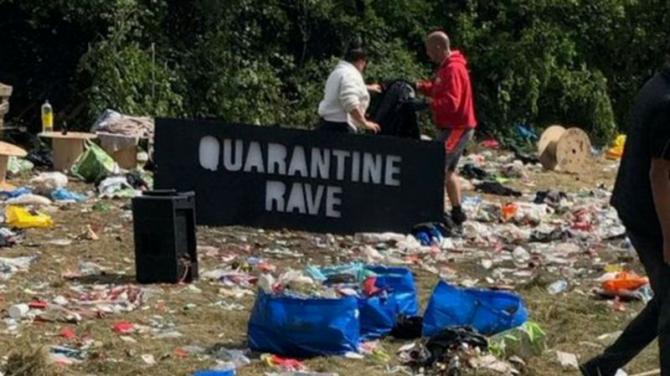 POLICE and community leaders have condemned the organisers of illegal raves which are drawing large groups of young people together as COVID cases spike.

The PSNI has confirmed that mass gatherings have been reported in several isolated locations - including a number across Antrim and Newtownabbey.

It is not a new phenomena either. During the height of the first lockdown crowds gathered in remote areas like Rea’s Wood for impromptu open-air parties - regardless of the consequences.

But with mounting evidence that the virus is running rampant among younger people - who are least at risk - there are mounting fears that many could potentially be carrying it home to more vulnerable family members.

And that means that the ‘raves’ are very much out of step with strict public health guidelines.

This week police have sought to ‘remind’ young people, parents and guardians about the dangers associated with illegal raves, ‘particularly when attendance in is contravention of the Health Protection Regulations’.

“Over the last number of weeks we have seen these illegal raves pop up in the Mid and East Antrim area and in our neighbouring District of Antrim and Newtownabbey,” he said.

“Recently we were made aware of buses transporting young people to a gathering in the Tildarg area.

“The dangers of these events are clear.

“We have young people, some who are underage, consuming alcohol and potentially being left to find their own way home from forests and other areas out of the way, which are often poorly lit.

“They are putting themselves and others at risk, particularly when it comes to social distancing breaches.

“We are speaking with bus operators to remind them about their responsibilities and will continue to respond to reports, particularly where we believe young people are putting themselves in a vulnerable position.

“If you are a parent or guardian reading this then please speak to your children about the dangers involved in attending unauthorised events and be confident you know they are safe when they are heading out.”

Councillor Neil Kelly admits that his first response to the fad is ‘anger’.

“This behaviour is dangerous and not only puts those attending at risk but puts all of us at risk,” fumed the Antrim Town rep.

“Those organising these raves need to catch themselves on and stop at once.

“These type of parties have to stop and stop now.

“We all need to play our part during this crisis and I would ask young people who attend these raves to have a word with themselves and consider the consequences.

“Parents need to be vigilant and ensure they know what their children are up to at all times and indeed those supporting this activity by providing transport need to take a step back and show some responsibility.

“I appreciate times are difficult for all of us and we all need to let off a bit of steam but taking part in illegal activity is not the way to do it.”