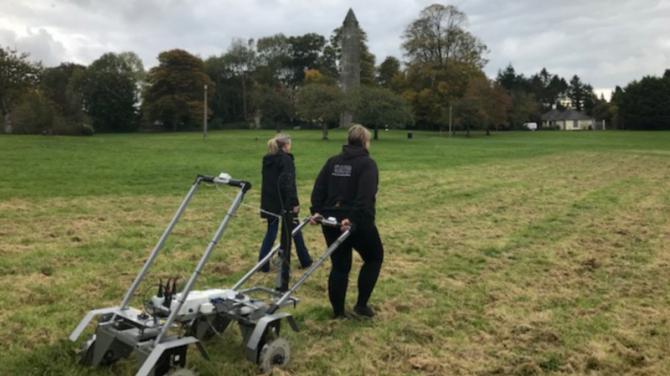 TOP academics have been surveying the area surrounding the Round Tower, known locally as the Steeple, in a bid to find out more about what lies beneath the historic site.

The Centre for Community Archaeology (CCA) at Queen’s University Belfast has been conducting a programme of geophysical survey in the vicinity of the Steeple in Antrim town on behalf of the Lough Neagh Landscape Partnership (LNLP) and Antrim and Newtownabbey Borough Council, funded through the National Lottery Heritage Fund.

Once the location of a major early Medieval monastery but now a public park, the survey has been carried out by Dr Siobhán McDermott, Dr Heather Montgomery and Ruth Logue, and represents the second fieldwork project that the CCA have undertaken since the onset of the Covid pandemic in March.

Almost a year ago, local councillors welcomed new £363,000 plans for the Steeple site in Antrim - including an archeological dig.

In June 2019 it was agreed that the sum, which was proceeds of the sale of the old cinema site at Fountain Hill, be invested in the development of the Round Tower and surrounding parkland.

Members attended a presentation that September, which provided a historical background to the Round Tower, the ‘Witches Stone’ and the wider monastic site, followed by a visit to the tower itself.

The presentation also covered examples of where similar sites have been preserved and developed as tourist attractions, including Nendrum Monastic Site on Mahee Island near Killinchy in County Down, and Devenish Island on Lough Erne.

The ancient monastic history of the site dates back to the 10th Century.

Antrim’s Round Tower is believed to have been one of the earliest of its kind built in Ireland and served as a bell-tower and place of protection or refuge from raiders.

It is locally known as The Steeple, measures 28 metres tall and is now one of only two complete towers remaining in Northern Ireland and one of the finest left in Ireland.

It is now a scheduled monument, which is in the care of the state and maintained by the Department for Communities Historic Environment Division.

A report before last year’s meeting said that tall trees surrounding the site mean that it is largely hidden from the road, and that access is not immediately obvious.

Councillors agreed that the initial phase of work will include the provision of new signage, a path network which will promote greater access to the site and link to nearby schools and the civic centre, and lighting an enhancement of the tower itself.

Consideration was also given to an archeological dig on the site and a second phase which could include facilities for visitors, as well as technology to tell the story of the site.

Back in August 2016 Antrim and Newtownabbey Council proudly unveiled its ‘exciting plans’ for a ‘new community and recreational hub’ at the Steeple.

The council insisted that it was determined to ensure that any plans for the site would balance ‘both the historical significance and local needs’.

Central to the concept was a proposal to showcase the Round Tower as a unique feature in the borough.

There were also plans to develop the former council HQ a Steeple House and house business units, community enterprises and public spaces in the adjoining stable block.

However this is now up in the air because of last year’s fire, which gutted the building.

The estimated cost of the project back in 2016 was £6.7 million, some of which would come from ‘external funding’ and around £3 million from the council.

The bulk of the rest, however, would come from selling off two swathes of parkland for housing - a proposal which remains deeply unpopular among many residents.