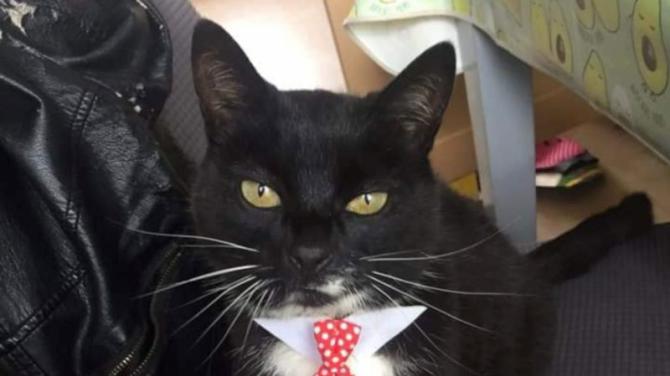 AN Antrim couple have decided to take some good from an horrendous ordeal after their pet cat was mauled by a dog and one half of the partnership was then involved in a serious road accident on her way to the vet.

Then, on her way to the vets where the pet was sadly put to sleep as a result of his injuries, Síle Ní Manacháin was involved in a horror car smash on Stiles Way and had to be cut out of her vehicle.

The nightmare day was played out over social media as local people tried to identify the owner of the dog after Síle’s partner Becka Price issued an appeal for information.

The animal was later collected by the dog warden and returned to its owner, although the couple appeared to be less than impressed by their response.

Síle said: “This dog was not collared and came into our garden and basically killed our cat while I had to wrestle it to the ground and out of our garden.

“I was on my way to the vets to see the cat put down when I was hit by a truck and was lucky I did not lose my own life, though my Mini is a write off, along with a fractured pelvis and concussion, but I'm home now

“I am frankly traumatised by all of it as you can imagine.

“I know accidents can happen, but I will be looking to clarify once better, if these were just genuine accidents and not careless disregard that has led to a series of awful events for our family.

“Thank you for everyone’s concern and kind words, and that helped us out.”

Síle was also supposed to be donating stem cells to a cancer patient, which has been postponed because of her injuries.

She has asked local people to consider doing something positive to counteract the couple’s personal nightmare.

“If anyone wants to do something nice after hearing about all this and something we would really appreciate, then please sign up for DKMS (an international non-profit bone marrow donor cente which aims to tackle blood cancers) or organ donation.” said Síle.

She added: “If that’s not your thing, something mental health care or Covid support-related, because I’m going to be off work for a good while and we need all the people we can get right now, in response to both those things.

“Or donate to Mid Antrim Animal Sanctuary, because that's where our wee cat came from 11-years -ago.”

As a result, a Facebook fundraiser has been set up by Becka’s brother Sam, entitled In Remembrance Of Rocky, to aid the charity.

It reads: “As some of you may know, we lost a family pet in a loose husky attack.

“Rocky had been in our lives for as long as my niece has been alive.

“Because of this I wanted to put some good back into the world and have decided to dedicate my next powerlifting meet to him, as well as raise some money for the shelter we got him from.

“If you’re a local to the Antrim area, you don’t need to be told how good a job the Mid-Antrim Animal Sanctuary does.

“Please pay attention to your dogs because this is a very real reality for us that could have been easily avoided. Thank you.”

Over £100 has already been donated.