Enkalon Foundation: the gift that keeps on giving! 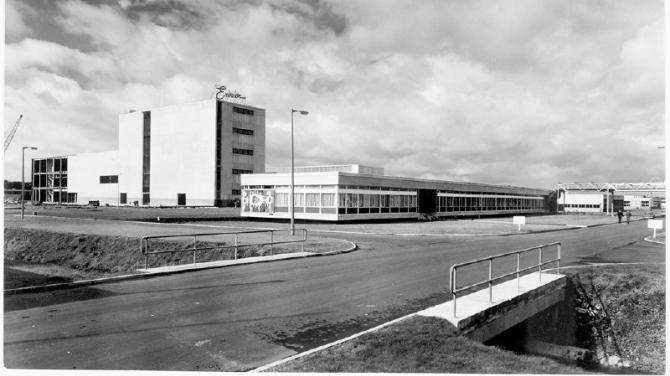 IT would be fair to say that Antrim has a complex relationship with Enkalon.

The promise of plentiful and well-paid work at the sprawling textile plant in the late 1960s sparked a stampede to country town.

Almost overnight ‘old Antrim’ was transformed, with families from four corners of the province upping sticks for a new life.

These ‘blow ins’ set up home in the huge satellite estates that mushroomed on huge swathes of farm land.

It was an exciting time, but as the seventies progressed there were storm clouds on the horizon. Enkalon may have been the making of this buzzing new town, but it was very nearly the breaking of it too.

Antrim had based its new prosperity on the factory. The eggs were all in one basket - and the Dutch owners knew it.

As the textile market turned more and more to cheap foreign exports, Enkalon was quietly urging the council and business leaders to formulate a plan B.

And they were right. When the factory finally imploded in the early 1980s it was a hammer blow to the town.

To their credit, the owners did not simply walk away.

In 1985 the Enkalon Foundation was established to help support former employees and the wider community in the wake of the shutdown.

The first awards were distributed in 1987 when 30 groups were granted £36,200 between them and since then it has continued to expand.

Speaking to the Antrim Guardian, Trustee Peter Dalton said the Foundation had delivered a huge legacy.

“The factory closed in 1982 but Dr Roelof Schierbeek first came here to run the run the plant in 1960, with the intention of staying for a couple of years.

“He made the decision to stay on and he was here for 50 years up until his death.

“He got the initial £1 million from the then owners and created this fund and when the factory closed, it was to help alleviate the difficulties people might face.

“The Foundation also had ownership of the social club and this was allowed to continue for as long as it was self-sufficient but the time came when it had to be sold to a developer.

“This boosted the fund money to around £7 million.”

Yes, you read that correctly. After more than three decades of public-spirited generosity they actually had much more in the pot than they began with!

Down the years, people have applied to the Foundation for money for a variety of reasons and these applications were routinely ‘evaluated and tabulated’ before coming to the Trustees at their quarterly meeting.

“It’s not usually about whether or not to give them money, it’s about how much to give.”

Given the deep links forged with Antrim, the group has always been conscious of doing as much as they can to support applications from the former Borough Council area.

This includes not only groups and people located in the area but also charities who work or create projects here.

“We really want to try to enhance the quality of life within the Borough.”

To mark the 30th anniversary of those very first awards, the Foundation unveiled a new Community Fund designed to do just that. And on an even larger scale than they had before.

“It’s a good opportunity to be more proactive,” explained Peter in 2017.

“We are throwing down the gauntlet and asking people to come up with bigger ideas. We haven’t set a cap on the amount of funding available.

“If you can demonstrate that your idea or project is worth the funding in terms of what it will bring to the community, then we’ll fund it in an appropriate manner.”

The only limit, added administrator Claire Cawley, was ambition.

“It won’t be about turning people away if the form isn’t perfect. We want to give people money and we will help them tailor their plan,” she said.

“It’s a case where people have been seeking funding to survive for a while but with this new idea we want to fund them to thrive.

“Rather than just ticking over. we want to see groups grow and develop and really enhance the community.”

With millions in the bank, that was quite an offer.

But surely such largesse must have followed a long spell of careful financial prudence? Careful, yes, but never tight-fisted!

In fact, in little more than 30 years they had provided more than £5.5 million worth of support across the province.

This was awarded to almost 6,800 grateful recipients - with almost half of them hailing from the Antrim Council area.

Locally that has translated to a whopping £2.74 million in funding for local projects, groups and charities.

In a single year, this averages out at around 188 individual donations totaling £180,000. Quite a feat.

Among the beneficiaries down the years are Age NI, Antrim Happy Hearts, Chest, Heart and Stroke and Macmillan. Women’s Aid, Men’s Shed, Autism NI and Rehability Antrim have also been enthusiastically supported.

And the list goes on. The Mid-Antrim Animal Sanctuary and Crosskennan Lane have also applied successfully, as have many other community associations, senior citizen’s groups, play groups and sports clubs.

The Foundation’s long-running relationship with the council has also borne fruit.

Enkalon still casts a long shadow over Antrim - but the work of Peter Dalton and his team has helped place solid foundations for growth.

The old site was recently purchased for redevelopment, so who knows how long the huge factory will stand.

But long after the shutters came down, it is clear that the benefits of Enkalon will continue for many years to come.