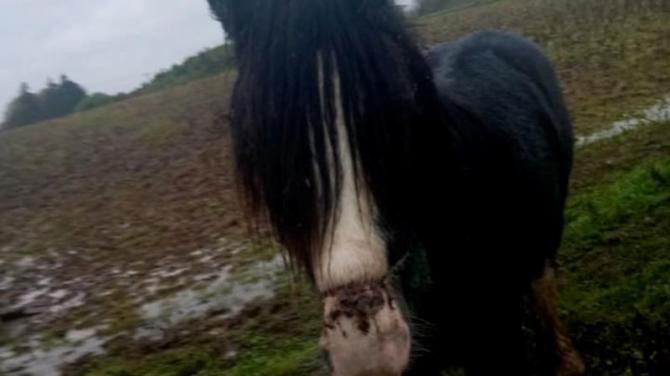 THE council has confirmed that an investigation is underway after a pony was left to fend for itself in unimaginable pain in Antrim.

The distressing case first came to light last Monday when a local man paid a visit to the muddy field near the railway crossing on Niblock Road to feed the horses.

He noticed that one pony was not interested - and it soon became obvious why.

A length of rope had been tied around its muzzle and it was so excruciatingly tight that it was cutting deeply into its flesh.

The local man had seen enough, heading home to call the police.

He also raised his concerns on social media, and within a few short hours his picture of the pitiful pony had been shared over 1,400 times.

Many expressed their concern and anger, and some volunteered to pay towards the vet’s bill.

The police and local animal sanctuaries were informed but were unable to intervene as the animals were on private land.

Orla O’Rourke saw the photograph too and she was incensed. She had already rescued several cats and dogs, along with several ponies, and she was prepared to personally travel to Antrim to liberate the injured animal.

“I was so distressed when I saw the poor wee thing. I had to do something,” she said.

“I knew that animal welfare had been devolved to local councils so I rang Antrim and Newtownabbey who told me to contact a number in Ballymena.

“If the pony was unable to eat this really was a race against time.

“Of course we don’t know what has happened here, but if this is a case of neglect action must be taken.

“I’ve been lucky enough to travel the world through my work and I’ve seen animal welfare problems first hand, but it really saddens me to think that heart-breaking cruelty could be happening here too.

“What sort of society are we living in?”

The Antrim Guardian contacted the council on Tuesday and by that afternoon they were on the ground.

Staff were observed approaching the animals and taking photographs of the pony’s injuries.

The following day a spokesperson confirmed that a full probe was underway.

“This horse will be taken into Council’s care.

“As this is an ongoing enforcement matter, no further comment will be made at this time.”

The spokesperson also clarified why calls had been diverted to Ballymena.

“If any member of the public has any concerns regarding animal welfare they can report it via our website, phone 028 2563 3134, or email animal.welfare