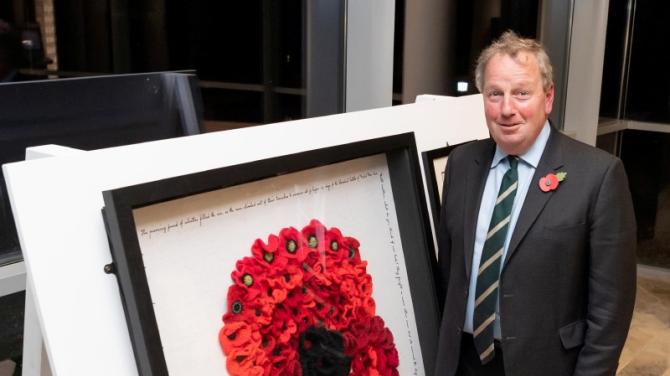 SELDOM was a man and a job better matched.

Danny Kinahan was recently installed as Northern Ireland Veterans’ Commissioner and he has taken a break from a whistlestop tour of duty across the province meeting service personnel with stories to tell.

That same hands on, face-to-face approach served him well on the political front lines. In a relatively short career, he served in the council chamber, at Stormont and the corridors of power at Westminster.

But the Ulster Unionist Party’s loss is certainly a gain for the army of veterans in Northern Ireland.

It is a subject he is passionate about. He followed in the footsteps of many of his family and joined the forces from university. A commissioned officer, he served with UN Peacekeepers in Cyprus, with the ‘old guard’ at Windsor, the Falklands and with the Black Watch on the mean streets of Belfast.

There are tens and thousands of veterans in Northern Ireland and while for the vast majority the transition back to civilian life has been seamless, some have struggled.

And these are the sort of people Danny Kinahan wants to help from his new office at Stormont House.

“There’s a big job ahead, no doubt about that, but I feel it is a privilege to do it,” he said.

“These are people who laid their lives on the line to protect the way of life we hold so dear. We owe them in the same way we owe our NHS.

“Over the last few weeks I have had the honour of meeting people who served in the army, the RAF and the Royal Navy and they have shared their experiences of how their lives changed after their service ended.

“And while it’s true that most have gone on to live happy, productive lives - some have fallen through the cracks.

“Post Traumatic Stress is a real issue. Many of these people witnessed some appalling things - violent deaths and the awful aftermath.

“I spoke with one man who spent three days piling bodies onto lorries.

“That sort of thing is obviously going to take a toll. Even the most mentally strong people can suffer if those memories are triggered.

“I want to reach out and help these people.

“When I was still MP I brought the Armed Forces Minister over to meet some of our veterans and I know that one of them has since taken his own life. It’s a problem that will not simply go away.

“It is estimated that we have 150,000 veterans in Northern Ireland. That’s a huge figure.

“Veterans Officer Liz Brown has been doing some terrific work with her team in Belfast, but my office will help join up the dots.”

And it’s not just PTSD he will be addressing head on.

He aims to help secure the delivery of Armed Forces Covenant and to deal effectively with issues ranging from mental health and housing, to employment and legacy trials.

He also wants to challenge perceptions that those issues only arise in one part of the community.

“This is not about unionism or nationalism - it’s about helping people from right across our society. It impacts on all religions and nationalities.

“I’m not here to wind anyone up or battle with people. I’m genuinely here to help everyone.

“At the centenary of the Somme I was struck by the cross-community nature of the people taking part in the commemorations. People signed up out of a sense of duty.

“That’s why there are so many veterans in this part of the world. Whole families enlisted, my own included. The forces are in our blood. It’s in us.”

The notion of the ‘fighting Irish’?

“No, the notion of selfless service. That’s a different thing altogether.”

His ambitions, inevitably, will come at a cost.

“There will be funding, but we remain indebted to the fantastic charities like the Royal British Legion, Help for Heroes, Combat Stress and many more who have been tirelessly raising much-needed money.

“COVID-19 has made that much more difficult but local people like Darren Hardy (see special feature on page 7) are still finding ways to help and support their comrades.”

As remits go, the Commissioner’s role is undoubtedly challenging.

But Mr Kinahan is determined to succeed.

“Throughout my political career I always had a very strong sense of what’s right and what’s wrong,” he explained.

“I will always stand against injustice when I see it.

“Some of the things I have seen written about our armed forces are just wrong and I want the demonisation to end.

“There is already support out there, but my role is make it all work.

“And as we look ahead to Remembrance Sunday, I feel inspired to give it my all.

“This is not an easy job, but I feel very lucky to be doing it. It is an honour.

“During my own service I was very fortunate not to find myself in many dangerous positions.

“I have lived a charmed life in many respects, but I promise to be an advocate for those who have not - people struggling mentally, financially or through disability.

“Before leaving politics I did my utmost to help people. Now that chapter is closed I will be able to focus on our veterans.