Meet the Antrim man who shared a stage with the stars! 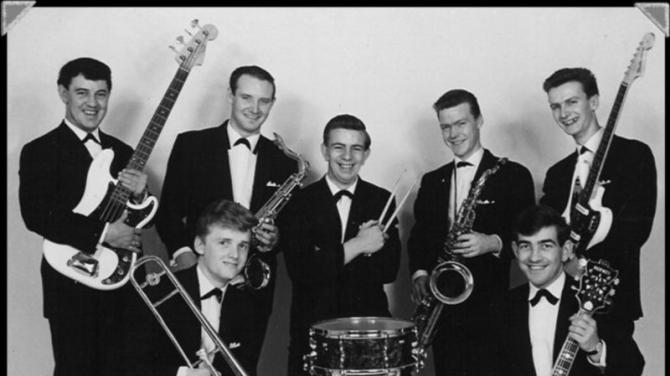 “WHEN we played with the Stones, I was 21-years-old,” recalls Antrim man Billy Swann. “They were a ‘scruffy lot’, we thought, so we didn’t ask for autographs. Damn!”

Back in the 1960s, Billy played lead guitar in the fondly remembered Cossacks Showband, one of the premier acts of Northern Ireland’s showband boom.

Gigging tirelessly across the length and breadth of Northern Ireland, the Cossacks quickly garnered an impressive reputation for themselves on the live circuit and eventually shared stages with chart-toppers like Freddie and the Dreamers, Tom Jones, Roy Orbison, and the Rolling Stones.

“I was about 16 when I first lifted a guitar,” said Billy.

“I hadn’t any interest in the guitar at all prior to that.

“Then my older brother got a Spanish guitar which he had exchanged for a stamp album or some such.

“He lost interest very quickly when his fingers started to hurt. The guitar was lying about in the house doing nothing.”

The would-be guitar slinger initially made tentative progress, first learning to pick out the two-chord folk song ‘Tom Dooley’ - as popularised in 1958 by the Kingston Trio - and purchasing Bert Weedon’s influential guitar tutorial book, ‘Play in A Day.’

Little by little, Billy’s fluency in the instrument grew, until, one Monday afternoon, he found an outlet for his new-found musicality.

“I heard about these young lads who had formed a guitar group.

“At this time - in or around 1959 or 1960- the Shadows were becoming very popular. They were the heroes of all aspiring guitar players.

“The four lads had formed a similar group which they called the Cossacks, based on the Shadows.

“I went to Harryville Orange Hall one Monday afternoon and heard them for the first time. It was total magic.

“My mind was made up. I wanted to be a Cossack.”

When two members of the original lineup - Melvyn McCready and John Watters - opted to leave the group, bandleader Dick Close went on the hunt for replacements to bolster the depleted ranks of the Cossacks.

Billy and fellow guitarist Tommy Lamont made the cut, but David McWilliams, the man later responsible for the 1967 psychedelic folk hit ‘Days of Pearly Spencer’, was not so fortunate when he auditioned for the role of singer.

He was turned down in favour of Jimmy Lynn, whose Western-inflected vocal stylings were deemed by the band to be more in line with their material of choice.

Together with saxophonist John Surgenor and drummer Brian McWhirter, the reformed Cossacks set out to make it big.

Practicing fervently at the Harryville Orange Hall and performing sporadically at dances at the local TA centre, the Cossacks began to refine their sound and gather an enthusiastic following.

“We were starting to put things together,” Billy remembers of the early traction gathering behind the band.

“We were gaining in confidence. We were learning new numbers. Things were getting serious.”

It was a momentum that would accelerate to a new pace altogether in 1964, when the Cossacks.- now joined by Harry Coulter, another saxophonist - were invited to perform at Ballymena’s Flamingo Ballroom.

Northern Ireland’s very own answer to Liverpool’s Cavern Club, the Flamingo was contemporaneously dubbed by one journalist as ‘the dancing Mecca of the North’.

Their debut appearance at the ballroom on St Patrick’s Day 1964 was pre-emptively publicised by a double-page spread in the Ballymena Weekly Telegraph extolling the virtues of the ‘seven young men’ who, it was hoped, were ‘going places’.

“Most of the fees they have received in their 18 months ‘on the road’ have been put back into more and better equipment, first-class musical instruments for every man in the band and the best amplification possible,” the article reads.

“On Tuesday night comes the group’s first real breakthrough when they top the bill at Ballymena’s Flamingo Ballroom, and they’re keeping their fingers crossed that the night will open the doors to the high spots in the world of entertainment.”

Setting a precedent for events yet to come, the Cossacks certainly did not disappoint.

“The Flamingo was packed,” said Billy.

“The crowd were all Cossacks fans and they showed it.”

The audience was enthralled by the group’s well-executed repertoire - which blended big band sensibilities with earthy rock n’ roll and country and Western balladeering - and the Cossacks became a commodity in hot demand from dance halls throughout the province.

Sammy Barr - the owner of the Flamingo - was impressed by what he saw and heard.

“He introduced us to all of the promoters of the top ballrooms in Northern Ireland and some beyond.

“The length and breadth of Northern Ireland was suddenly at our fingertips.”

The Cossacks were on their way.