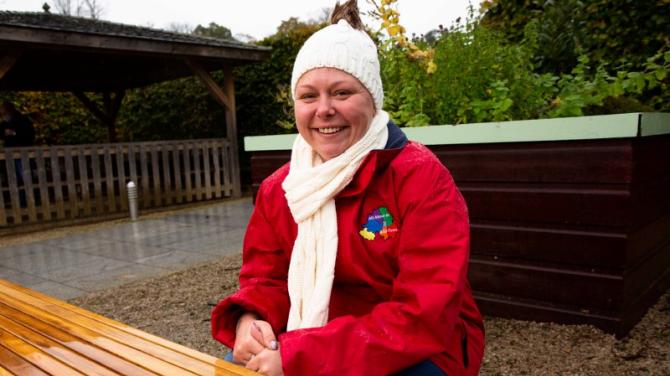 A MOTHER-of-three’s inspiring effort to support autistic teenagers in Northern Ireland during the coronavirus pandemic has been recognised and honoured by The National Lottery and Repair Shop host Jay Blades.

It has been two years since 38-year-old Christina O’Neill, from Antrim, became frustrated at the lack of specialist opportunities available for her children - Aaron, 18, Shannon, 17, and Nathan, 10.

For too long their lives were built around a 30-mile journey needed for them to access services.

And Christina decided to do something about it!

The local woman set up her own charity, ‘All About Us’, and it offers vital support for more than 150 children.

Now Christina’s fundraising and campaigning efforts have earned her a lasting tribute in the local community, in the form of a bespoke bench which will be positioned in Antrim Castle Gardens, distinctively designed by BBC Repair Shop’s Jay Blades.

The charity worker is one of 12 ‘Unsung Champions’ across Great Britain and Northern Ireland being recognised for their time and efforts in supporting some of the most vulnerable in communities during the pandemic.

“All the people I have who work with me say it’s because of the kids. Everybody deserves the credit - not just one of us.”

The special tribute came in the very week that the National Lottery revealed that half of people in Northern Ireland feel that notwithstanding the hardships of the pandemic, one of the positives to emerge is the sense of community spirit and 62 per cent have an increased appreciation for local workers in their community.

“I set up our group in September 2018, so I’ve been there from the start,” explained Christina.

“I have kids with autism spectrum disorder - or ASD - and I couldn’t find something inclusive for my oldest when he was having a rough time.

“If you want something done, then you just do it yourself, don’t you?

“The last two years have been absolutely fantastic. We’ve supported 150 children over lockdown and are in the process of taking over our own unit which is going to have a 20-year lease on it.

“It makes me proud, but you want to see the kids.

“You have a child come through who maybe isn’t sure if it’s the place for them, has been to other places and hasn’t fitted in. Maybe they’re here for a week, two weeks or six months and to see the change and confidence in the child, that’s the best part.”

When the pandemic forced Northern Ireland to shut down in March, Christina was worried how she’d continue to support her community, as change and disruption are often very difficult for many autistic people and families.

But alongside husband Anthony, Christina and her team quickly pivoted to offer remote support, maintaining a vital lifeline for local families.

With the help of National Lottery funding, thousands of people and projects across the UK are supporting their communities during the COVID-19 pandemic.

These efforts are making a huge difference to people’s well-being, particularly those who are more vulnerable and isolated.

“In March when the lockdown came, it was very hard,” she said.

“Originally nobody had a real clue about what was going on, and I think I was a bit naive as I thought it would be for a week or maybe two.”

But there were some positives to be found in the gloom.

Around a third of local people have confirmed they know their neighbours better than before lockdown, meaning that a staggering 82 per cent actually feel safer as a result of the pandemic.

“We received funding and we started delivering fortnightly packs to the kids,” said Christina.

“We’d have different activities that we would do, such as well-being exercises, to help them to calm down.

“The toughest moment was when we tried to do Zoom meetings! They were terrible - our kids are very much about face-to-face contact and doing it over Zoom was quite awkward, so we gave up on that quickly!

“It’s definitely a great achievement that we’ve managed to make it work.

“I love what I do, and I love the kids I work with.

“It’s just amazing, and the biggest achievement is seeing how well they have come along and seeing them get to take the opportunities that they feel they can’t have.”

In some communities the actions of a few have made life bearable for many.

Christina is just one example of the thousands of people and projects across the UK who have received National Lottery funding in order to support communities during the COVID-19 pandemic.

National Lottery players contribute £30 million a week to good causes around the country, many of which are supporting the most vulnerable in communities across the UK during the coronavirus crisis.

Presently ‘All About Us’ only supports children, but Christina is looking for volunteers and more fundraising to broaden their reach to include young adults too.

She explained: “We got the first grant from The National Lottery in July 2019 and we were able to run a year-long programme.

“We wouldn’t be able to run all of these things if it wasn’t for that funding.

“We could have got paper and pens for our arts and crafts, but we couldn’t have run our fun programme.

“The courses the kids have done are incredible, so they’ll have those certificates for two or three years, and then they build their CVs to help them get jobs.”

This increased appreciation for people who help others in their community, has led to a greater desire from the public to honour them.

So much so, that 12 times as many people would rather buy a drink for a local charity worker than an A-list celebrity.

Which is bad news for people like Jay Blades, but he does not seem to mind!

“Like most of us, I have witnessed inspirational acts of selflessness and kindness this year as people have adapted their lives to help others,” said the BBC star.

“It has been an honour to get to know the 12 people whose work is being honoured today with a bespoke bench being placed in their local area.”

Dawn Austwick, CEO of The National Lottery Community Fund, said she continued to be inspired by what has been achieved by people like Christina.

“For 25 years The National Lottery has helped make amazing things happen, but never in such extraordinary times,” she said.

“People and communities have found themselves facing myriad challenges and pressures but have still found the passion and drive to support each other in so many ways.

“These bespoke community benches are a fitting tribute and show that their incredible work has not gone unnoticed and is in fact recognised, valued and inspiring others more than ever before.”

The new bench can be found by the greenhouse in the beautiful gardens by Clotworthy House.