Sharing those final moments with people was a 'privilege' 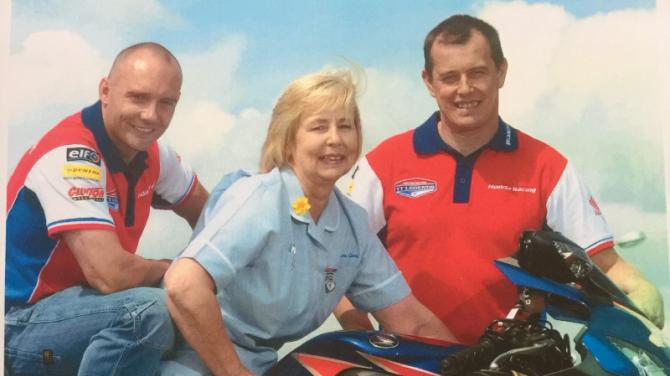 For most little girls, their dream is to be a princess or a popstar, but for Antrim woman, Sonia McCallion, she knew from ‘no age’ that she wanted to be a nurse.

Having found her vocation so early in life, Sonia was delighted to start in the Mid Ulster Hospital after her exams before moving to Massereene once she and her husband had settled in the town.

Quickly finding her forte in surgery, she and her team were the last people out of the former hospital when Antrim Area opened its doors in 1994.

Sonia project-managed the redesign of her department which was recognised with the Charter Mark in 2000.

With such a passion, Sonia knew that the time had come to move on when she felt like she was no longer meeting her true vocation in the best way.

“It was a decision really between nursing and admin,” she explained.

“It just wasn’t what I wanted to do as I was so much more drawn to the practical end of the work.”

A chance happening upon an advert for Marie Curie felt like fate when it seemed to keep cropping up in front of her eyes and Sonia was excited to turn her hand back to the old-style nursing which she loved.

“At 55 I couldn’t retire and just do nothing so I when I got the job with Marie Curie I began doing the night sits with patients from 10pm until 7am,” she said.

“I wish I had moved to Marie Curie years ago

“The training from Marie Curie was exceptional and while there was of course paperwork, you were working one on one with a patient and had that time to comfort them, hold their hand, brush their hair; just do whatever you could for them.

“I considered it an honour - families were inviting you into their home during such a private time and you could build up that rapport with them as they placed their trust and confidence in you.

“I truly believe that 50 per cent of the job was supporting the family as they were, understandably, in pieces.

“You needed to give the nursing care to the patient but also that mental care and support for the family.

“There were many nights I cried along with the family I was with.

“It was honestly a privilege to be able to do the job, to have that trust that you would do everything you could for their loved one to let them pass with as much dignity as possible.

“It was so very rewarding.

“I can remember going to the house of a man and his name was familiar.

“When I walked in, I realised it was a senior surgeon I had worked with.

“I cried, he cried but it was an honour to care for him.”

Never one to rest on her laurels, Sonia was heavily involved in setting up a blood transfusion service for the Belfast area in conjunction with the Bridgewater Suite at the City Hospital.

This allowed the Marie Curie nurses to be trained to offer blood transfusions in the home, taking the strain of travel off the patient and easing some of the pressure at the unit.

The establishment and day to day running of the service was a huge operation, with Sonia and her colleagues being responsible for tracking, collecting and packing blood, caring for the patient, doing the admin and returning the blood packs to ensure any further checks could be done if necessary.

“There were new girls coming in so I qualified to be an assessor to train them and assess them,” Sonia continued.

“They received all their training and then came out in tandem with me so I could score them.

“I also trained someone else as an assessor as the service expanded.”

Proving herself such a valuable member of the team, Sonia was a sure fire choice for her next project - running a pilot out of hours service based in Ballymena.

This has since transformed into the Dalriada Urgent Care service which is a vital health care service now.

“It was initially set up with five Marie Curie nurses and people would have rung in and were triaged and then directed on where needed,” Sonia explained.

“There was a fully-equipped car and a driver and you were able to go and assist people who were being cared for in their own homes.

“It could have been for pain relief or for their anxiety or even, when the relatives were just at their wits’ end.

“It was so well received as people began to learn about it although it took a while for everyone to realise it was there and that it was free of charge.

“It expanded and district nurses or GPs were asking us to give people a wee call for reassurance.

“We covered the whole Northern Board area which is huge but it was - and still is - an excellent service.

“I was called out to one man who was in pain and his family were just so panicked.

“I gave him some relief and got them settled too and the next thing, a thank you letter arrived.

“It said ‘we rang for a nurse and an angel came’.

“That just said it all. I know God put me on this earth to make a difference and I’m so glad that I could.”

Sonia also worked a few shifts at the Marie Curie Hospice in her earlier days which gave her a full grasp of everything they do.

Her first foray into fundraising was a chance event when a few nurses were needed for a publicity photo for an upcoming charity event.

“They had us out on the road for this photo,” she laughed.

“And I ended up on the back of a motorbike ahead of the Ulster Grand Prix as they were supporting Marie Curie.”

In June 2010, Sonia and five of her friends made the decision to tackle the Hadrian’s Wall walk to raise money for the cause which was so close to their hearts.

“I was helping out in the charity shop at that time and we did a sponsored cycle on an exercise bike to raise money,” she said.

“We held a BBQ at Moe’s Grill as well as a street collection and car boot sale.

“It was a huge task - the total route was 96 miles so we basically walked a marathon a day for four days but we raised almost £8,000 so it was well worth it.

“We also collect every year outside Tesco and people are so generous, it’s incredible.”