As election fever grips the US meet the man who dined with three Presidents! 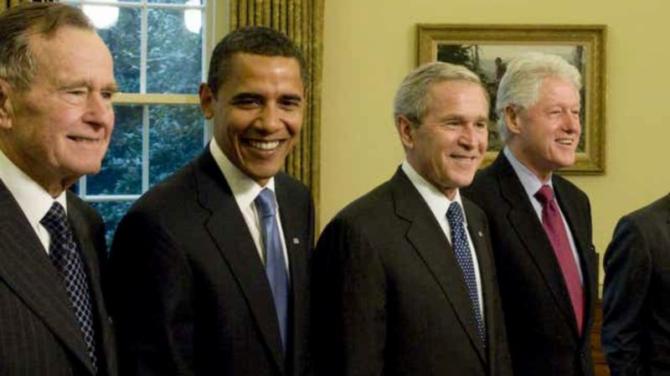 YOU would not necessarily think it to look at him, but former Antrim councillor and MLA David Ford has some very influential friends.

The social worker turned cross community campaigner toiled for years to transform the bleak political landscape into receptive soil for change - often ploughing a lonely furrow in the 1990s when such progressive ideas were not in vogue.

Yet the unassuming former rep, who lives on a family farm near Tardree, has dined with the Queen - and chewed the fat with no fewer than three American Presidents!

It is one of the quirks of political life in Northern Ireland that the weighty Irish American lobby has occasionally given Stormont stalwarts a place at the top table on the world stage. And David Ford’s invitation was seldom lost in the post.

The former Alliance leader undoubtedly watched this week’s dramatic developments in the States with interest, but given that he stepped down from front line duties in 2016 he will probably not be rushing to get his dinner suit dry-cleaned!

When he discussed the prospect of a prolonged Ford siesta with the Antrim Guardian he lifted the lid on an extraordinary political career - and he looked like a man who had a huge burden lifted from his shoulders.

The sole survivor of South Antrim’s Assembly class of ‘98 stood down as the leader of the Alliance Party almost 15 years to the very minute that he took up the reins.

During that time he also served six years in the policing pressure cooker that is the Justice Ministry.

Ever the diplomat, he accepted that it had been a ‘challenging’ spell. Given that he had to contend with everything from sectarian murder and a prison system in crisis, to all-too-public spats on flags and gay marriage, few disagreed.

Yet as the sprightly 60-something breezed into the Antrim Guardian office to chat about his years in the fast lane he had a spring in his step. And what was that on his face? Was that a smile?

The trademark beard may have been whiter than it was in 2001 - after all, he was a social worker, not a miracle worker - but as he reflected on a career that took him from the family farm to tea with royalty and dinner with Presidents it was clear that he had found a brand new lease of life.

Most political careers are driven by the pursuit of power, but David Ford seemed quite content to hand it back and go back to basics.

“After 15 years I felt it was time for a fresh pair of hands,” he said.

Those hands were attached to none other than Naomi Long, who adopted a resurgent party.

And what about David’s old friend Neil Kelly? He was crowned king of Antrim after harvesting a frankly incredible 1,689 votes in the Town - almost 1,000 clear of the runner-up.

Changed times from when Alliance were in it for the long haul, winning elections in the early hours after counts running into the double figures.

And David Ford was at the Valley to see this remarkable reversal of fortune, and there was no sign of bitterness that it had not happened under his watch. Quite the contrary, in fact.

He was elated like a proud father at a graduation ceremony.

It surely brought back memories of where it all began for him, when he first took a council seat in Antrim in 1993.

What Alliance lacked in raw numbers back then, David made up for with raw ability marking him out as an opponent to be respected in the chamber.

On one memorable occasion he declared that a fellow rep was either ‘a liar or a fool’, which prompted his opponent to jubilantly declare that he was ‘no liar’. Game, set and match David Ford!

That same good humour served him well on the hill, but there were times when the heat was on that his rapport with the press cooled.

That was all too apparent in November 2015 when he was grilled about a damning report on Maghaberry Prison. When asked if he would resign he snapped curtly at the reporter and stormed off - on camera.

“I had an urgent meeting with the Secretary of State and I’d made it clear that I could only field two questions, but she ignored me. She didn’t seem to get the message.

“But on reflection, I’m not normally like that, am I?

“Justice is one of the two heaviest Ministerial posts, the other being Health, and the hours were long and the work hard.

“Pressure came with the job. I’ll never forget travelling along the M1 to Stormont when I learned that a prison officer had been murdered. You don’t forget moments like that.

“Did it affect my work in South Antrim? To some extent, yes.

“It was more difficult to be on the ground in the constituency. I did try to get out and about on the doorsteps when I could, but the window of opportunity was suddenly smaller.”

Since leaving that behind him, he learned that the little things could make the biggest difference.

“I remember when myself and my wife were helping do a mail shot for Neil Kelly and after we’d finished our stint it was a wonderful relief that we could go down to the lough shore for an ice cream rather than race home to sign papers.”

But it was not all bad.

Asked about his personal highlights, the answer came quick as a flash - beating Martin Meehan to retain his Stormont seat in 2003.

His eventual victory was ‘doubly satisfying’ since the veteran republican had already been interviewed on TV prematurely declaring that he had won!

And then there were the meetings with world leaders.

He met the Clintons, both Bill and Hillary. They were, he said, ‘always very pleasant’.

He has also dined with George W Bush - in the White House, no less - and has enjoyed a laugh with Barack Obama.

“I was at a lunch in the capital when I learned that my eldest daughter had given birth and President Obama very kindly signed a best wishes card.

“He asked me if the baby had been named and I told him that he was only two-hours-old, so if he had I hadn’t heard yet!

“He smiled and said ‘tell your daughter that Barack’s a great name’. I must confess she did not take his advice.”

And then there were his brushes with royalty. He met the Queen on a number of occasions and was always struck by how well informed she was - and by how funny she could be.

“She has a real sense of humour, which surprised me I must say,” said Mr Ford.

“I had the honour of attending the dinner in her honour in Dublin Castle. There were 200 people there, but two million who would have liked to be.”

But what about those persistent rumours that he was in line for a promotion of his own, following fellow former leader John Alderdice to the House of Lords.

“Absolutely not,” he said, without missing a beat.

“David Trimble offered me a peerage on a previous occasion and I said thanks, but no thanks.

“If you’re a democratic politician of a liberal persuasion you can’t achieve anything higher than securing the support of your neighbours to represent them at council three times and the Assembly five time.”

So would he decline it if he were offered again.

“I have no expectation that it would be offered,” he replied.

He seemed content with his lot, as master of his own destiny.

Enoch Powell once famously said that all political careers inevitably end in failure. Not so for David Ford.

By choosing the timing and method of his departure, there was no fall from grace. No betrayals. No splits. No regrets.

In fact he handed over the keys with the party in better shape than when he found it. A rare feat.

“I couldn’t have done this without the support of Anne and my children. They put up with my absences and the endless changing of family plans.

“They accepted it all with great cheerfulness and that has made all the difference.”

And with that he was gone. He may have stepped out of the political spotlight, but there was still much to do.

And, yes, he was smiling.