Black Lives Matter row splits the council down the middle 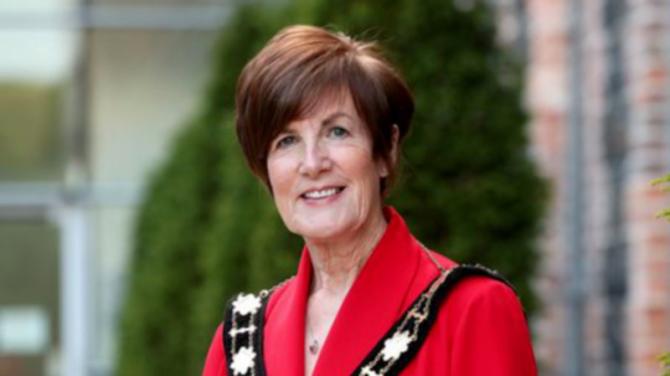 THE DUP have thwarted a proposal designed to show solidarity with the Black Lives Matter movement across Antrim and Newtownabbey.

Earlier this year SDLP Deputy Mayor Noreen McClelland proposed that the council should quite literally cast a light on racial intolerance by lighting its civic buildings in support of the global race campaign.

Her plan was endorsed by the Community Planning Committee last month, and their verdict came before full council for ratification.

It soon became clear, however, that the DUP had different plans.

Group leader Philip Brett said he would happily ratify the minutes - with one significant caveat.

“It is the view of our party that that would be a much more inclusive event for the council to mark,” he explained.

“I think the original intent of the Motion which first came forward has somewhat changed and given the evolving nature of the Black Lives Matter campaign.”

The tipping point for him, he said, was the move towards registering Black Lives Matter as a political party with the Electoral Commission.

“This organisation, whilst it started out with very good intent, has now become a political organisation,” he said.

“We also have concerns in relation to policies they espouse in relation to defunding our police service which is something we as a party could not stand over.

“It is our view that the original intent of the Motion is better reflected marking Black History Month.”

This was seconded by fellow DUP man Mark Cooper.

In his opinion, the amendment was ‘much better’.

“It gives everybody a chance to look and see how much black history has shaped our society,” he said.

But Noreen McClelland was having none of it. It was her Motion, and she wanted it left as it was.

“I have listened very carefully to the sentiments of the two previous speakers,” she said.

“This is something i brought before the council back in June of this year. I still believe it is a viable option.

“I believe that racism is something we should be calling out and I’m still of the opinion that lighting up our civic buildings to show our solidarity for black and ethnic minority groups is extremely important.”

And this was underlined, she said, by reports of racist attacks locally. This year there have been 92 incidents - and that was ‘totally unacceptable’.

“I believe we must work together to defeat racism and intolerance and discrimination,” added the Deputy Mayor.

Sinn Fein Councillor Michael Goodman voiced concern that the DUP were trying to tinker with the original proposal by suggesting a ‘completely separate event’.

SDLP man Ryan Wilson also backed his party colleague as ‘racism is alive in our Borough’. Indeed, he had seen it first hand.

“Just before the recent lockdown I had a guest at my home in Randalstown and we took a walk to a local shop where he waited outside when I went in to purchase some milk.

“When I heard what had happened I suggested that they report it to the police.

“Their response was that they were used to it.”

And that is why, he said, that it was so important to support a movement that stands against ‘systemic racism on a global scale’.

The Brett amendment went to the vote, and it was clear that the chamber was bitterly divided.

Most unionists - with some notable exceptions like former Mayor Paul Michael - voted to veto Black Lives Matter. The SDLP, Sinn Fein and Alliance benches voted to retain the original.

But given the political arithmetic at play in the chamber, that was bad news for Councillor McClelland.

When the votes were counted the DUP proposal passed by 21 votes to 17.

Speaking afterwards, the SDLP council group on Antrim and Newtownabbey Borough Council said they were ‘appalled by the decision’.

“The inability of the DUP to send out a simple message of support for the Black Lives Matter movement is simply galling,” she said.

“It is very simple, you either support Black Lives Matter or you don’t. There is no in between.

“It is astonishing that they consider a movement committed to ending violence inflicted upon black communities as ‘too political’.

“Everything is politics and showing support to this movement through our local political sphere is as good a place as any place to start in tackling racism within our own communities.

“The DUP should really reflect on the reasons why they find themselves unable to support Black Lives Matter.”