'Do not be conquered by evil - but conquer evil with good. That's what Antrim has done' 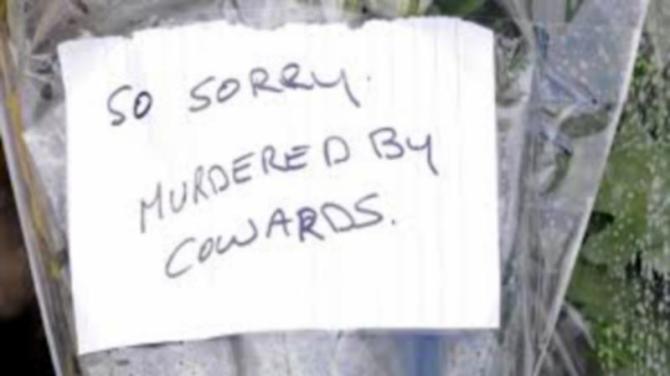 The backlash was swift and emphatic - and Mayor Keenan led from the front.

“To those who did this we would say, get out from about us. We do not want you. You have nothing to offer that we want,” he said.

Alliance leader David Ford said that if the gunmen hoped to put both communities back on a war footing, they had tragically miscalculated the mood of the people.

“I have lived in Antrim all my adult life and I have had the honour of representing them since 1993. I now face the prospect because of the way we often refer to events by place names, that when people talk about Antrim in the future, they will think of Saturday night,” he said.

“That was the message that we should take from the weekend. When Father Tony Devlin led his parishioners across the road and stood at the tape and gave a clear statement: ‘you do not act in our name’. When people from the Church of Ireland and the Methodist and Presbyterian Churches joined them they said that whatever is thrown at us, we stand together.”

That message was reinforced one week after the murders when 500 people converged on the Randalstown Road once more to pay their respects and send out a defiant message to those who tried in vain to drive a wedge between them.

More than a decade has now past, but the scars of Massereene are still visible. Antrim refuses to forget the horrors carried out on its doorstep.

In March this year Mayor John Smyth led the annual commemorations for the Sappers. Wreaths were laid and speeches made to a large crowd at Market Square.

The focus was on the Massereene Memorial, which was erected by the Cenotaph on the old town walls.

With the threat of COVID emerging fast, the families were not represented at the service - but Patrick’s family were there in 2019 for the 10th anniversary.

The Engineers had long since left the former barracks, but new owners Randox built a memorial garden at the scene of the attack.

For the family, it was further proof that their son was still remembered.

Geraldine Ferguson told the Antrim Guardian that the simple service, conducted by Legion Chaplain Stephen McBride, had been ‘tremendously moving’.

And while she had dreaded the painful visit to the murder scene, it had helped bring them closer to the events of March 7 2009. They had decided to do it as a family. And they decided to do it for Patrick and Mark, or ‘the boys’ as Geraldine lovingly refers to them.

“This really is the hardest place in the world for me,” she said.

“This is where my son was murdered. There’s no escaping that.

So where had they found the strength to make that trip across the Irish Sea once more?

“We have always received a very warm reception here, which has been a great comfort but this is where my child died.”

And, of course, the killers are still at large.

“Yes, that’s the double burden. The police unearthed a lot of evidence but justice has not been served.

“Ten years have passed now, which seems incredible. It’s gone fast in a way, but many of those days were very hard.

“Do I think there will be convictions? Truthfully, no. I’m afraid we will have to learn to accept that.

But down the years they have drawn enormous comfort from the support they have received from the people of Antrim - and those same people certainly did not desert both bereaved families when once again they were forced to look back on those wasted years and imagine what could have been.

The Azimkar family were clearly moved to discover that local people still remembered the terrible sacrifice on March 7 2009.

Mayor Paul Michael said the numbers who gathered that day, despite the sharp wind and driving rain, reflected the revulsion still felt across the community to the ‘cowardly attack’ on unarmed men.

That was echoed by Colonel Norman Walker, the Queen’s Deputy Lieutenant for Country Antrim.

“It seems like only yesterday when I heard the sad news of the deaths of Patrick Azimkar and Mark Quinsey when they were mown down by terrorists,” he said.

After offering his personal condolences to the family in attendance, he added that the murders had ‘a huge impact’ on the community, particularly the Antrim area.

And while the threat from dissidents remains, he added that locals had set ‘an example’ by defying them by standing shoulder to shoulder against their murderous campaign.

“It’s good to see so many people paying their respects. I would expect no less.

“It’s imperative that we remember the fallen and injured - and keep them in our thoughts and prayers.”

Next to the podium was Geraldine, - and once again she bravely and articulately opened her heart about the challenges of life after Massereene.

“Good morning and thank you all very much for coming here today to remember Patrick and Mark whose young lives were stolen from them exactly 10 years ago today as they collected a pizza delivery from outside the barracks,” she said.

“Thank you Antrim for keeping the boys close to your hearts over the years, even though you never knew them.

“I would also like to remember the others who, through no fault of their own, were caught up in the horror of that night. All of them were left traumatised and three were left with life-changing injuries. Their lives changed forever as a result.

“Our thoughts are also with Mark’s mother Pamela for whom losing her only son was more than she could bear and she died of a broken heart in 2013 - another victim of the Massereene attack, of whom there are very many more.

“This morning Mehmet, James, Gloria and I planted a tree at the spot where our son lost his life. This is also marked by a bench and a small Garden of Remembrance to mark what happened at 9.40pm on the 7th of March 2009.

“I am mindful of what St Paul said when he stated: ‘Do not be conquered by evil, but conquer evil with good’. That is what Antrim has done. They have transformed a place of terror into a place of peace and reflection, and I can’t thank them enough.

“My family and I would like to thank all those who have been involved in making this possible. Dr Fitzgerald for his agreement to the creation of the garden and the council for approving and funding it.

“We also owe a debt of gratitude to the Mayor, Paul Michael, who spearheaded this project and worked so hard to make this happen and made sure it was ready for today.

“Thank you all very much indeed.”

Mrs Azimkar then read a prepared message from Mark’s sister Jaime. She has moved to Australia and admitted that she was ‘not ready’ to return to Antrim just yet.

“Ten years is a long time to be without your brother. Ten summers, 10 birthdays, 10 Christmases without him,” she said.

The murderous attack had, she said, ‘destroyed’ her family - and that pain still endures.

“I don’t think I’m strong enough yet to come to the place where it happened.”

She added, however, that she was ‘touched’ that Mark and Patrick were still ‘loved and remembered’.

The families had reached another milestone. Sadly, for them there are many more to come.

Theirs is a lonely vigil, but the people of Antrim stand with them.