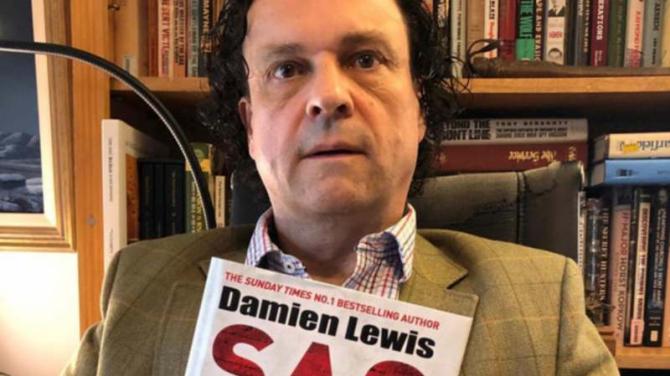 THE exploits of a Randalstown war hero who was murdered by the Nazis has been immortalised in a new book about the SAS.

From Kemmilhill Park in Randalstown, aged just 22, Paratrooper William Pearson Young (right) was gunned down after being betrayed when he landed in Occupied France in 1944.

Though still a young man, he already had four years of service under his belt.

His father and four uncles served in World War I and a brother was in the RAF.

Five other cousins also served in the forces.

According to Andy Glenfield, who runs the Second World War in Northern Ireland website, at 23.34 on the night of July 4 1944, Captain Garstin and eleven other S.A.S. Soldiers took off from Keevil Airfield in a Short Stirling aircraft to be dropped by parachute behind enemy lines at near La Ferte-Alais to the south of Paris as part of ‘Operation Gain’.

French Resistance Fighters had been informed of the parachute drop however two of them believed that a third, who used to take used parachutes and sell them in Paris, was missing for some time and may have been captured by the Gestapo.

At 01.53 the S.A.S. parachuted from the aircraft with most landing on the Drop Zone, which was a field of wheat, whilst the final five to jump had landed in a wood.

At the edge of the Drop Zone was a group of men wearing civilian clothes who greeted Captain Garstin with the words ‘Vive la France’ immediately after which the soldiers came under fire from automatic weapons.

Trooper Thomas James ‘Tot’ Barker (previously of the Royal Inniskilling Fusiliers and from Cookstown, County Tyrone) and Lance Corporal Howard Lutton (who had been Army Air Corps and from County Armagh) had been captured after being wounded.

Lance Corporal Lutton subsequently died of his wounds and is buried in Clichy Northern Cemetery.

Captain Garstin and Trooper Barker received hospital treatment for their wounds whilst the other men were initially taken to a Gestapo Headquarters where they were kept and interrogated for three days.

At 01.00 the following morning all of the men were told to board a lorry and were driven north of Paris.

About five hours later they reached a Wood which was East of Noailles and here they were ordered out of the lorry and told to walk along a narrow path to a clearing in the Wood.

Facing the men were a number of Gestapo.

Two officers who were armed with Sten guns at the ready whilst another read out the sentence.

A Sergeant of the Gestapo who translated and a Gestapo Agent in civilian clothes.

“For having wished to work in collaboration with the French Terrorists and thus to endanger the German Army, you are condemned to the Penalty of Death and will be Shot”

On hearing the word ‘shot’ all of the men tried to escape into the woods.

The bodies of five murdered SAS men lay at the scene for three days before finally being buried by a German Army Unit consisting of one officer and approximately nine men who had been in the Chateau.

During the investigation it was necessary to open the grave and on doing so a total of five bodies were found.

All of them were dressed in civilian clothing and showed signs of having been handcuffed.

William Young was awarded the Croix de Guerre posthumously (see below) and is remembered in both France and Randalstown, where some of his ancestors still live.

The Antrim Guardian first visited the remarkable story several years ago and now it has been retold in a thrilling new book - ‘SAS, Band of Brothers’ by author Damien Lewis, pictured left (no relation to the actor of the same name, who starred in Band of Brothers).

It is subtitled: ‘The last stand of the SAS and their hunt for the Nazi killers’.

The blurb reads, how, in June 1944: “The SAS parachute deep into occupied France, to wreak havoc and bloody mayhem.

“In a country crawling with the enemy, their mission is to prevent Hitler from rushing his Panzer divisions to the D-Day beaches and driving the Allies back into the sea.

“Led by Captain Patrick Garstin MC, a man supposedly invalided out of the military due to his war injuries, rarely had a wilder bunch of raiders been assembled.

“Having blown to pieces scores of prize targets, Garstin's patrol executed one of the most daring escapes of the war ... only to fall victim to shocking betrayal.

“Captured, imprisoned and tortured terribly by the Gestapo, they faced execution in a dark French woodland on the orders of Hitler himself.

“But miraculously, two would escape, triggering one of the most-extraordinary Nazi-hunting operations ever.

“In summer 1945: with WWII officially over one team embarked upon a shadow war all of their own. Armed with knowledge earned first-hand in the torture chambers of the Gestapo, the race was on to bring to justice the Nazi war criminals who had murdered their brothers in arms.

“In a deniable, deep-cover operation backed by Winston Churchill himself, the 'the Secret Hunters' would expose Nazi Germany's darkest crimes, doggedly tracking down those they most sought.

“Breathtaking and exhaustively researched, SAS Band of Brothers is based upon a raft of new and unseen material provided by the families of those who were there.

“It reveals an epic of courage, maverick-spirited daring and bloody betrayal, plus the gripping quest for vengeance and justice that lasted through to 1948 and beyond.”

Damien Lewis is a number one best-selling author whose books have been translated into over forty languages worldwide.

For decades he worked as a war and conflict reporter for the world’s major broadcasters, reporting from across Africa, South America, the Middle and Far East and winning numerous awards.

His other books include the World War Two classics SAS Ghost Patrol, Churchill’s Secret Warriors, The Nazi Hunters and Hunting the Nazi Bomb.

Over a dozen of his books have been made, or are being made, into movies or TV drama series and several have been adapted as plays for the stage.

He has raised tens of thousands of pounds for charitable concerns connected with his writing.

The book has also been serialised in the Daily Express.

To find out more about the book and how to buy a copy, log on to http://www.damienlewis.com/