Why local people must never forget the evil of Massereene 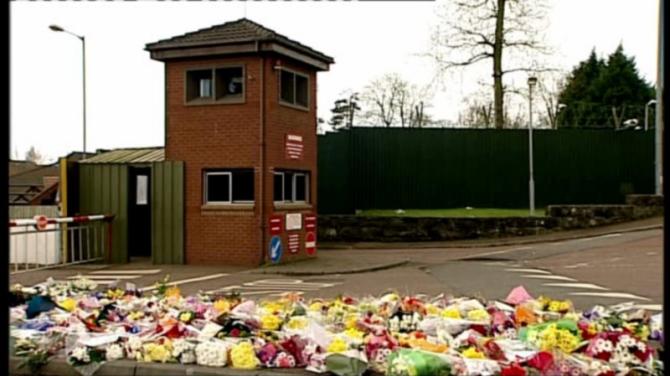 THIS week many local people bowed their heads to honour the heroes who paid the supreme sacrifice in times of war.

Galvanised by Remembrance, three words were on their lips - Let We Forget.

It is a powerful sentiment, and one that is particularly pertinent to the people of Antrim.

March 7 2009 is a day they will never forget. That is the day that sectarian hate boiled once again over into bloody violence. That was the day of Massereene.

Some acts of evil can become indelibly burned on the public consciousness.

Like Omagh or Greysteel, Teebane or Loughinisland, there is an all-pervading sense that dark forces conspired that terrible night to forever taint the name of Massereene.

Sappers Mark Quinsey and Patrick Azimkar were children when the last British soldier had perished in the province in 1997, so they had no reason to fear when they learned that the 38 Engineers were moving to the quiet garrison town on the shores of Lough Neagh.

No soldiers had died in Antrim during the darkest days of the Troubles, despite the heavy presence of three military bases, so it was seen as a lucky deployment - and the perfect launching pad for the more testing challenges that lay ahead in Helmand Province in Afghanistan.

After all, the locals were friendly. There had been romantic liaisons, children and even marriages in the past. Some of the men had even set up home in the town after they were demobbed. What could be better?

In turn, the people of Antrim largely welcomed the new neighbours with their unfamiliar accents, neat haircuts and bulging wallets - particularly the town’s traders.

The Regiment even had the rare distinction of receiving the Freedom of the Borough.

They had become more and more a fixture of local life since the guns had fallen silent, regularly venturing out of the confines of camp - and when they were unable to visit town, they ordered the home comforts in.

On any given Saturday it is understood that up to 20 fast food deliveries snaked their way along the Randaslstown Road to Massereene Barracks. No-one could have guessed that the men of violence had spotted the pattern and were preparing to make a delivery of their own.

The deaths of two young soldiers as they collected a last supper of pizza was all the more shocking because no-one saw it coming - least of all the unsuspecting troops.

Gunmen stepped from darkness - some would say the past - to give their deadly verdict on a decade of stability in the only way they knew how.

High velocity automatic fire designed to bring Stormont to its knees brought four soldiers and two ‘collaborators’ who dared deliver their takeaways to the ground. One of the young troops hurled himself on top of Antrim man Anthony Watson, perhaps saving his life as the streets ran red.

Gale force winds battered Antrim that night, carrying the terrifying crescendo across the town - shaking locals from their reverie and waking frightened children from their beds.

Any hopes that this was an ill-advised fireworks display were dispelled when a baleful siren and the clatter of scrambling helicopters filled the night sky.

The peace had been shattered by 60 bullets in less than 60 seconds.

Six men had been cut down in the withering hail of bullets and two young men who had dreamed of fighting for Queen and country lay dead. The war on terror had come home, but they were the last to know.

Within hours the media invasion began and the ‘Massereene murders’ became international news. The story was painfully familiar, but the backdrop to the senseless slayings had somehow shifted.

With British troops still dying with sickening regularity in that distant war zone, it was with a grim irony that Northern Ireland - a dead story for most - suddenly hit the front pages again.

The Troubles, as they were euphemistically known, had claimed more than 3,600 lives, each tragedy burning brightly in the public consciousness until it was eclipsed by the next.

But the horror of the double killing would linger on in Antrim. The Real IRA may have been prepared to slaughter the innocent to achieve a united Ireland, but on that blustery March night they somehow managed to unite a community.

Without fanfare, and long before the anchormen and women laid down roots outside the barracks, local people had silently come together to register their revulsion.

For those present, that simple but impressive display of solidarity painted a vivid picture of a community as one in grief. Their hot tears offered cold comfort to the triggermen.

The first question for most was ‘why?’ - invariably followed by ‘why here?’

There were no easy answers.

Antrim may have been spared to worst excesses of the Troubles, but the dark shadow of sectarian conflict was never far away.

Before the Real IRA ‘spectacular’, the Borough of Antrim had seen 54 lives lost in the cycle of tit-for-tat violence, many every bit as ghastly as the calculated carnage at Massereene.

Few are remembered, however, outside the families torn asunder. Even horrendous acts of murder had been rendered little more than statistics.

Back in 1972, for example, Antrim men John McNulty and Patrick Kelly decided to spend a summer evening on the tiles - but instead lost their lives in a UVF ‘romper room’.

Under the pretence of interrogating the young Catholics, the men suffered terrible torture before they were released from their agonies by death. Their bodies destroyed by knives, even a battle-hardened Northern Ireland coroner said the killings were ‘particularly horrible and brutal’.

The Provisional IRA occasionally ventured into the unionist heartland too, with equally devastating results.

On June 25 1976 armed men burst into Walker’s Bar near Templepatrick and shouted ‘to hell with yous’ before spraying the Protestant clientele with bullets. Three died.

One week later a local UVF unit responded in kind by opening fire in the Catholic-owned Ramble Inn on the outskirts of Antrim. Six perished - five of them Protestant.

No matter how bad things got, however, there was always a sense that it could be worse. Like people across the province, ordinary folk were content to live with an acceptable level of violence.

The guns may have largely disappeared in the years following the signing of the Good Friday Agreement, but for some old animosities continued.

Former IRA leader Martin Meehan won a seat on Antrim Borough Council for Sinn Fein and proved to be a provocative presence, finding a receptive audience among stalwart republicans for his distinctive brand of confrontational politics.

The Ardoyne man, the first to be convicted of membership of the Provos and the last to be released after internment, had impeccable republican credentials - but even the former gunman could not win around the new breed of dissidents thriving on the periphery of the movement.

These struggles never had the support of the ordinary rank and file, who were generally happy to live together in mixed housing estates.

Moderates continued to fare well at the polls too. Indeed, that very year saw the election of Independent Nationalist Oran Keenan as Mayor of the unionist-dominated chamber.

With power sharing embraced, the 20,000 residents looked to the future with confidence - until their town became the springboard for an audacious attack on the very peace process many people held so dear.