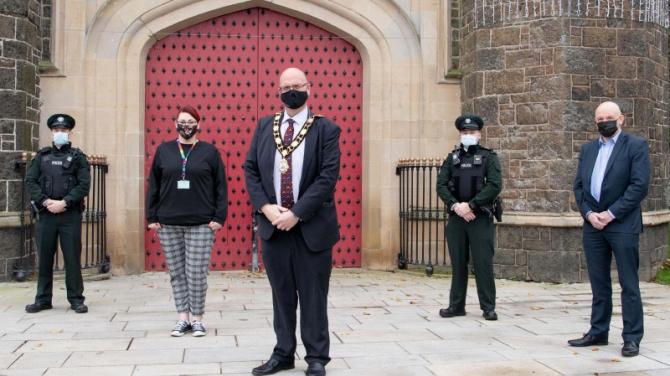 ANTI-social behaviour may be an age old problem which has plagued the Borough and further afield for years but a new initiative in Antrim looks set to give young people something else to focus on and help address any underlying issues.

While local estates were often the main hotspots for incidents of ASB, more and more often, trouble is flaring in more centralised locations.

“We have been seeing issues at the Castle Gardens, the board walk, Market Square and in the town centre itself,” Neighbourhood Sergeant, Chris Tate explained.

“There’s the open space, the car parks and it’s like a thoroughfare where they have freedom to run about.

“We are aware of groups of up to 50 or 60 or even more young people in Market Square.

“Frankly, these are young people and I will keep asking the same question - what are the parents doing?

“We see young people being dropped off with drink and there needs to be accountability for that while we work to address these matters.

“There are problems we can have in working with the youth and the uniform is one huge barrier in our engagement.

“They are completely different if we’re not wearing that and we can see how difficult they find it to engage with us.

“But it is clear that early intervention is key and that is where the work that has been so well established in Crumlin by a Safe Space to be Me is going to be vital here in Antrim.

“There will be that additional presence on the streets from people who will have direct numbers for us if they’re needed and there will be the new facility in the unit in the Castle Mall too.”

This collaborative to divert and engage young people has been warmly welcomed and as Safe Space establishes its footprint in the town, it is clear that there is much that they can do.

Constable Paul Savage reiterated what Sergeant Tate had to say.

“We’re not seeing this same style of anti-social behaviour across the estates,” he said.

“There are issues of course but what’s happening in the town centre is different and the majority of that anti-social behaviour is now very much centralised.

“We have seen the impact that Safe Space have had out in Crumlin and the issues there have been very much diminished by their work.

“We hope to see that same impact here.

“Crumlin Glen, which is a real beauty spot, was constantly in the headlines for what was happening but now, it’s completely different and that’s because of the hub which was established by Carolyn and her team and the fact that these young people now have a place to go.”

And Constable Savage is not the only person keen to see the results delivered in Crumlin extend to Antrim town.

Sergeant Tate, having spent a lot of time working closely alongside his team and the charity, is confident that these results can be replicated.

“There’s a vacuum in Antrim,” he explained.

“There is no getting away from that with the fact that there’s no additional street presence now.

“But with Carolyn’s youth workers, there is now going to be that direct engagement with these young people.

“And the expertise that Safe Space brings to the table for this type of initiative is invaluable.

“It can seem like they’re just parachuting in and I suppose, in a way they are.

“They’re parachuting in to somewhere that there is real need for this service and facility.

“But they are also very much here to stay.

“They have a proven model out in Crumlin and I am very excited to see what the future holds for the work of the charity and the new drop in here in the town.

“On behalf of the neighbourhood team, I want to say a big thank you to Carolyn and her team.

“They work tirelessly and we have seen the impact of their incredible work.

“There can be no denying that there has been a rise across the board in anti-social behaviour and that’s due to a number of different reasons.

“People are reporting more and more to us, which we are very happy to see.

“We want the communities that we serve to have confidence in doing that.

“There have also been more young people congregating given schools and so on were closed due to the situation with coronavirus.

“But we have watched levels of anti-social behaviour in Crumlin decline and that has been because of what has been going on at the Hub.”