Tributes to 'true leader' Joanne after Nurse of the Year honour 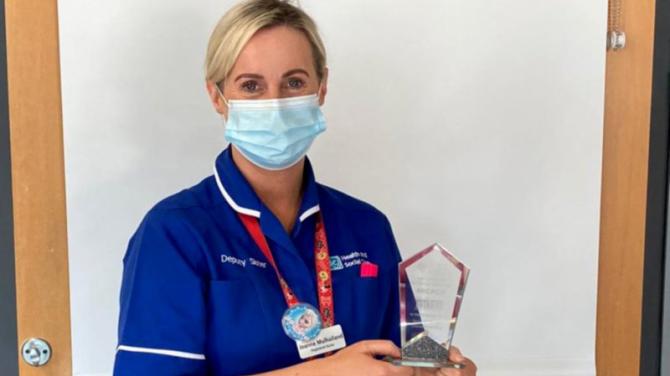 WARM tributes have been paid to the Randalstown woman who has been crowned the first ever Paediatric Nurse of the Year.

Joanne Mulholland has been a compassionate friend in need for countless sick children at Antrim Hospital’s busy A2 ward for several years.

Her towering contribution was recognised when she was made acting Band Six Deputy Sister.

Her work also caught the attention of the panel at the Northern Ireland Paediatric Awards for Training Achievements, the body set up to recognise excellence in children’s care.

Joanne was nominated for Nurse of the Year, against 35 of her most devoted peers across Northern Ireland - and she won!

She rose to the top of a talented field, winning praise as a ‘true leader’ and ‘an exceptional role model’ who consistently worked ‘above and beyond’.

Justifiably proud of the award-winner in their midst, the Northern Trust offered their congratulations on social media - and within a day it was shared over a thousand times.

Many people who have benefited from her expertise down the years have also welcomed her life-long commitment to care.

Gael Martin spoke for many when she said the award was ‘fantastic’ news.

“My daughter Mazie has just spent five days in ward A2 with Joanne and all the other amazing doctors and nurses who gave her amazing care,” she said.

“They went over and beyond to help her settle and get back to full health. Thank you all at ward A2. Amazing, amazing people.”

This was echoed by RJ May.

“Anyone who has worked with Joanne will know how well deserved this award is.”

Shauna McCusker said her reputation as someone prepared to go that extra mile was well earned.

“She is a fantastic person in everything she does. A2 is so lucky to have her,” she said.

And the tributes continued to roll in, with many from parents grateful to have crossed her path in their darkest hour.

“This time 12-years-ago my new born daughter was very ill in A2,” said Surney Dempsey Duggan.

“She spent two months being treated for a very rare condition. Joanne was amazing with her and us as worried parents.

“This award is very well deserved. We have a happy, healthy 12-year-old today thanks to you and all the staff in A2.”

Eimear Moody knows that sense of gratitude all too well.

“I remember Joanne staying well beyond the time her shift ended one night when my little Megan was so ill.

“We were not sure what the outcome would be. Well, Megan turned 14 yesterday.”

Given the ongoing COVID restrictions, the ceremony was held online - and Joanne modestly insisted that the award should be shared by all members of the team.

“Thank you so much for my award for Paediatric Nurse of the year,” she said.

“It’s even more special as this is the first year of this award.

“There are so many special people in A2 that make it a great place to work from doctors, nurses, pharmacists, auxiliaries, domestics - far too many people to mention.

“So this award is for everybody in A2.

“It’s my birthday at the weekend and I was celebrating anyway but it’s now a double celebration. Cheers and thank you.”

And thank you, Joanne. Your tireless devotion and conscientious care have left an indelible mark.