Another year passes and still no justice for murdered nurse 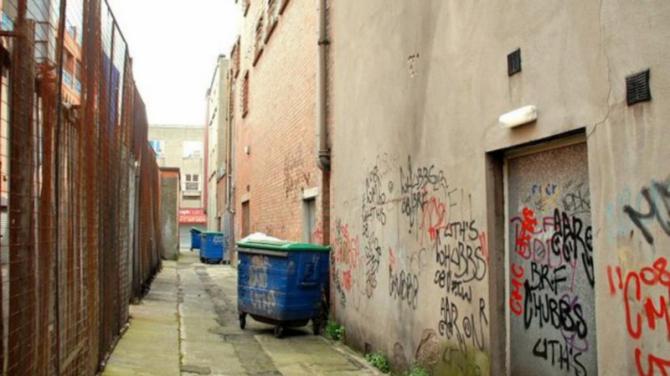 AT 9.10pm on a brisk early December’s evening back in 2002, a woman walking along Belfast’s Church Lane was perturbed to hear a string of whimpering groans emanating from Cole’s Alley.

With Christmas just around the corner and seasonal festivities spilling out onto the streets, she logically deduced that the moaning from the alleyway must have come courtesy of some drunken reveller who, having over-imbibed on Christmas cheer in one of Belfast’s many bars, would hopefully face no greater consequence than a head-splitting hangover the following morning.

Reassured, the woman braced herself against the winter chill and hastened home.

The reality of the situation, unfortunately, was far more tragic. It is now understood that the noises issuing forth from that dingy back street were, in fact, the final desperate cries of Antrim man Warren McCauley, fighting a losing battle for his life after a savage attack left him lying mortally wounded mere yards from the twinkling lights of Belfast city centre.

It was not until the next morning - December 3 - that Warren’s battered, unconscious, form was spotted by a security guard en route to his work. His extensive injuries, which included a fractured skull and a number of shattered ribs, were chilling testament to the ferocity of the beating he had received.

The best efforts of medical staff to mend Mr McCauley’s broken body and restore him to life were, sadly, all in vain and he died in hospital two days after he was found. He was aged 54.

Following a post-mortem examination, the police confirmed that a murder manhunt was underway and detectives appealed for witnesses to come forward.

However, justice for Warren would prove elusive - in part owing to the layers of secrecy applied by the deceased to keep his private life just that.

Warren was a well-liked and respected man who had moved from Portadown and settled in Antrim’s Castle Park. Working by day as a nurse at Muckamore Abbey, he had a reputation amongst his peers as a caring and trustworthy friend.

But Warren McCauley harboured a secret that he feared would lead his colleagues to ostracise him if ever it emerged. He was gay.

Even if societal attitudes to homosexuality in Northern Ireland are finally becoming more progressive - same-sex marriage was legalised in January 2020 and proposals have been tabled to ban so-called ‘conversion therapy’ - some less savoury elements of the province’s historic treatment of the LGBT community left many unwilling or afraid to ‘come out’.

Warren himself would have been 29-years-old when the late DUP leader Ian Paisley initiated his 1977 ‘Save Ulster from Sodomy’ campaign, intent on protesting and barring the decriminalisation of homosexuality in Northern Ireland. Whilst ultimately unsuccessful, highly visible advertisements were placed in newspapers claiming that any change in the law ‘can only bring God’s curse down upon our people’.

Such blatant homophobia in the political realm is today increasingly - and mercifully - a thing of the past. Nevertheless, high-profile campaigns portraying homosexuality as sinful, shameful and wrong not only inflicted deep psychological wounds, but also forced the burgeoning gay community underground.

And so, after checking out from his shifts at Muckamore Abbey, Warren would become ‘Aaron’ and immerse himself in the clandestine underworld of what was then a very different gay scene to that of the present day.

Warren’s affable personality naturally shone through into his secret second life and, before long ‘Aaron’ was socialising with a wide circle of friends, many of whom also protected their privacy with aliases.

He was known to spend much of his time cruising for partners in the Oxford Island area, or around McKee’s Dam near Hillsborough.

One acquaintance later told the police that Warren would frequent public toilets to meet with other gay men - although he insisted that he would never approach anyone directly, apparently preferring to wait for them to ‘make the first move.’

Yet, despite these precautions, the grisly nature of Warren’s death and the resultant police investigation put paid to any remaining shred of obscurity smoke-screening his personal life.

Ultimately, it was impossible for Warren to take his secret with him to the grave, yet the very tactics he adopted for ‘self-preservation’ severely hampered efforts to apprehend his killer.

“It can be very complicated,” observed a police spokesman. “

It can be quite common for people to use a false name to protect, if you like, their private life.”

Even 18 years later, incongruities in the case persist and the culprit - or culprits - have yet to be brought to justice.

What is known is that on the fateful day of the fatal attack, Warren had taken the day off to travel to Belfast with the intention of finishing his Christmas shopping.

By 2.20pm, he had arrived at the city centre and was captured by security cameras as he entered the Body Shop at Donegal Place, where it is believed he purchased a gift for a friend.

Around an hour later, he was spotted leaving public toilets with another man in the vicinity of Arthur Lane, although it is understood they had parted company by 4pm.

As darkness began to fall at around 4.30pm, Warren was spotted once more on CCTV outside toilets near Cole’s Alley - eerily close to the spot he was found, beaten, still, left for dead, the following morning. It was at this critical juncture, however, that any remaining certainties in recounting the events of December 2nd fell away and the investigation ground to a frustrating standstill.

It is often surmised that Warren had hoped to meet with a man named either ‘Stevie’ or ‘Paul’ at the Custom House Bar on Skipper Street, but it is impossible to ascertain whether or not this rendezvous ever came to pass.

By their own admission, the police’s attempts to track down and trace individuals amidst the throngs of people milling around the city centre that evening amounted to a ‘logistical nightmare’.

Suspiciously, around twenty minutes after the anonymous passing lady was alarmed by the sound of moaning from Cole’s Alley, another woman passing through Ann Street noticed two young males greeting another two men emerging from the alleyway. These men were never identified - a seemingly insurmountable hurdle that has dogged the enquiry since day one.

If confusion still reigns as to who was responsible for the reprehensible assault on the kindly Antrim man tortured by the burden of his own suppressed sexuality, the same cannot be said for the cause of his death.

Weighing up the evidence, State Pathologist Jack Crane concluded that Warren had died as a result of a brain injury.

The general consensus holds that Warren had been struck in the face with such force that he fell backwards and hit his head on a nearby kerb.

Despite the fact the head wounds from such a fall would surely have incapacitated Warren, likely causing him to bleed profusely, the assailant showed no mercy.

Further analysis indicated that the attacker had either knelt on the stricken man’s chest, thus robbing him of breath, or they had jumped on him until he fell silent.

Motives for the assault raised by police did not exclude the potential that the horrific violence inflicted on the 54-year-old Antrim man may have been homophobic in nature.

As news of Warren’s death percolated throughout the province, a tragic irony emerged. In a bittersweet denouement to the inner tumult of shame and denial that had blighted his life, when news of Warren’s sexual orientation and secret lifestyle became public there was no scandal, no ignominy - just an outpouring of grief from a community devastated to have lost a devoted servant and friend.

Former Mayor Drew Ritchie, who had worked with the murdered man at Muckamore Abbey for many years, said that ‘no-one had the faintest idea’ that Warren was gay - adding that, even if they had, it would not have diminished his standing in their eyes.

“His private life was his own concern, and I would never dream of prying, let alone judging,” he said.

The former UUP rep also noted that Warren had been busy planning for the future when his life was tragically cut short, having received money from a Criminal Compensation claim following an earlier assault.

He had, however, made some final preparations too.

He carried a Donor Card, and his liver, kidneys and heart later gave others a second chance at life.

“That sort of generosity was typical of the man. He was always thinking of other people,” added Mr Ritchie.

Given the dramatic progress made by the LGBT movement in the past few years amongst the greatest tragedies of the case is that Warren McCauley did not live to see people like himself gain the greater levels of acceptance and respect they have always deserved.

Sadly, he left behind a world that he felt was not prepared to accept him for who he was.

Only with his death were Warren’s friends and family afforded a glimpse into the other half of his life - a half they undoubtedly would have loved, cherished and welcomed.

“He has made a difference to other people’s lives,” Drew Ritchie said.

“The world was a better place for him being in it.”